Cassini has been out there hard at work for a long time. The Saturn probe departed Earth in 1997 and spent seven years speeding across the solar system to arrive in orbit around the ringed planet in 2004.

For over 13 years, it's been up there collecting data with an array of spectrometers, magnetometers, radars, and yes, cameras.

While all these types of data are valuable to scientists, it's the images Cassini has been sending back down to Earth that have given the world a much more intimate acquaintance with the beloved ringed planet.

And they're not just about showing us its pretty face, either. With the breathtaking photos Cassini has been taking so far from home, we've been learning new and fascinating things about Saturn, its moons and its rings.

Over the years, here are some of our favourite images of a world so alien to our Earthling experience.

The Day the Earth Smiled 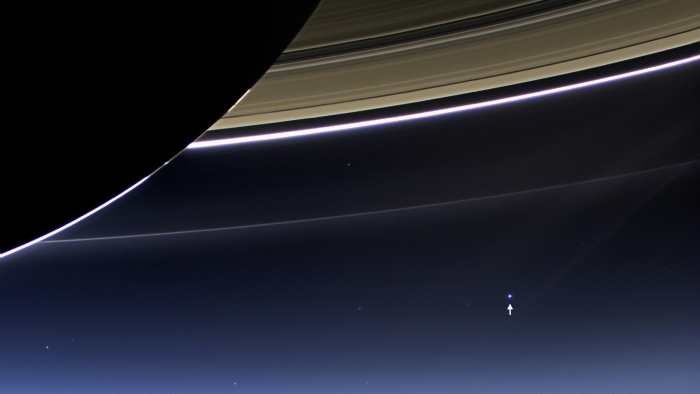 On 19 July, 2013, Cassini and Saturn were lined up in such a way that this photo was possible. See that arrow, pointing to a pale blue dot? It looks like just another star, but it's not. That's Earth. It's us, seen from a distance of 1.44 billion kilometres (898 million miles) away.

The picture marks only the third time that Earth had been photographed from the outer solar system, and the first time that we knew ahead of time that the photo was being taken, so we could all look up and smile at the right time.

If you squint, you can't see anyone, don't be silly. But it allowed people to celebrate the wonder of space probes, science, and space.

You can see and download the full image here, including wallpaper sizes for your PC. There's also a picture of Earth peeking between the rings of Saturn taken in April of this year, which you can check out here. 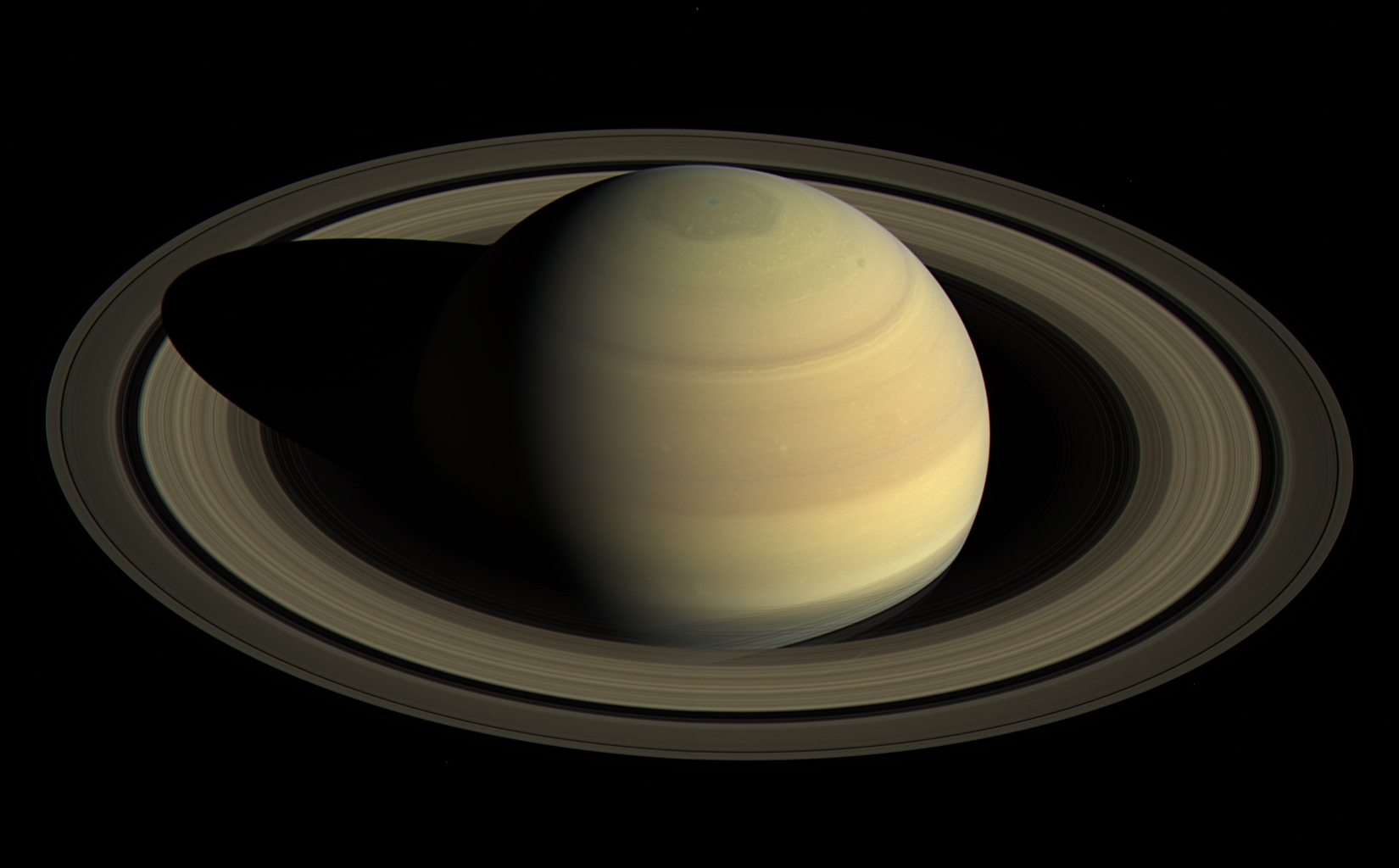 Saturn is a lot farther out from the sun than Earth, and takes a lot longer to complete an orbit than we do. One of Saturn's years takes 30 of Earth's years, which means proportionally long seasons, too. A season on Saturn lasts for over 7 years.

That means Cassini has been able to observe the seasons shift. This image was taken in 2016, as Saturn moved into its solstice in May 2017. The northern hemisphere, pictured here in the sunlight, is in summer solstice, the southern hemisphere in winter.

These seasons do have an effect on Saturn's weather, and Cassini has been able to observe it in detail. 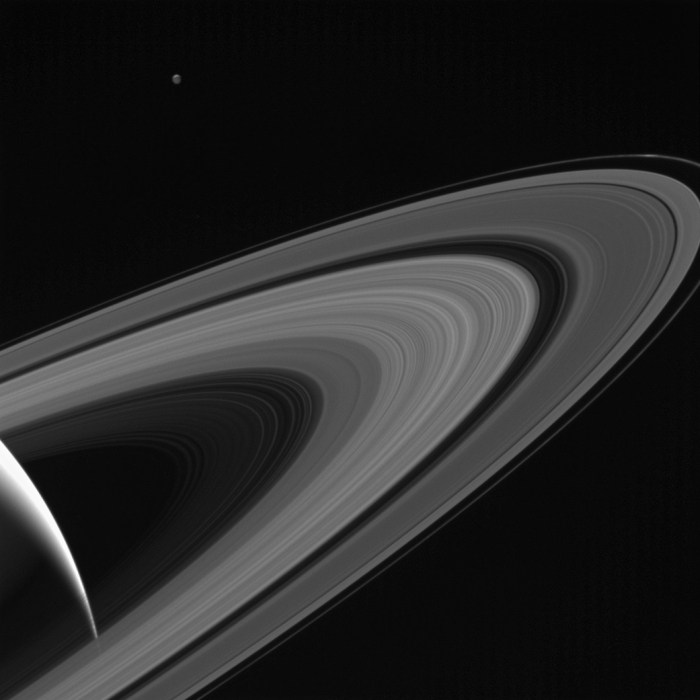 Tethys is the fifth-largest of Saturn's moons, and is composed almost entirely of ice, with just a small amount of rock.

Thanks to this composition, it's highly reflective, and shines brightly. In this image, it's lit not by sunlight, but Saturnshine, or sunlight reflected from Saturn.

Cassini has been able to provide a lot more information about Tethys' surface features, including colours at very small scales, that indicate materials not found elsewhere. 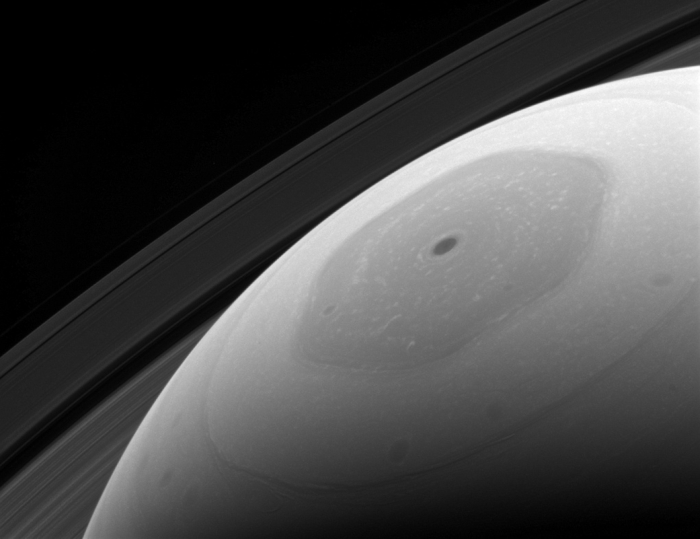 Saturn's north pole is unlike any other in the solar system, characterised by an enormous permanent cloud pattern in the shape of a hexagon. The sides of this hexagon are 13,800 km (8600 miles) long, which is more than the diameter of Earth.

For the first half of Cassini's mission, the northern hemisphere was in winter, and the hexagon in shadow. But as the seasons turned, the hexagon became visible, allowing Cassini a good look - and it noted some interesting changes.

For instance, between 2012 and 2017, the hexagon changed colour, from blue to golden yellow. NASA researchers believe this may be caused by reactions between sunlight and particles in the atmosphere.

The jets of Enceladus 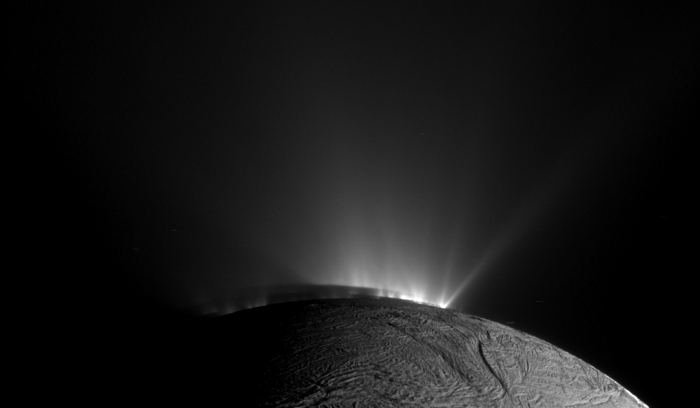 Cassini made the incredible discovery of liquid water on two of Saturn's moons, Enceladus and Titan. Even more fascinating was Enceladus' jets.

Discovered on the ice moon in 2005, these jets are geysers of water vapour and ice particles from a liquid ocean beneath Enceladus' icy crust. Cassini actually flew through these jets and took measurements, finding molecular hydrogen.

This makes Enceladus a promising place to look for extraterrestrial life. Although there's little light there, researchers believe there may be hydrothermal vents - which in oceans on Earth, down in the dark, are teeming with life. 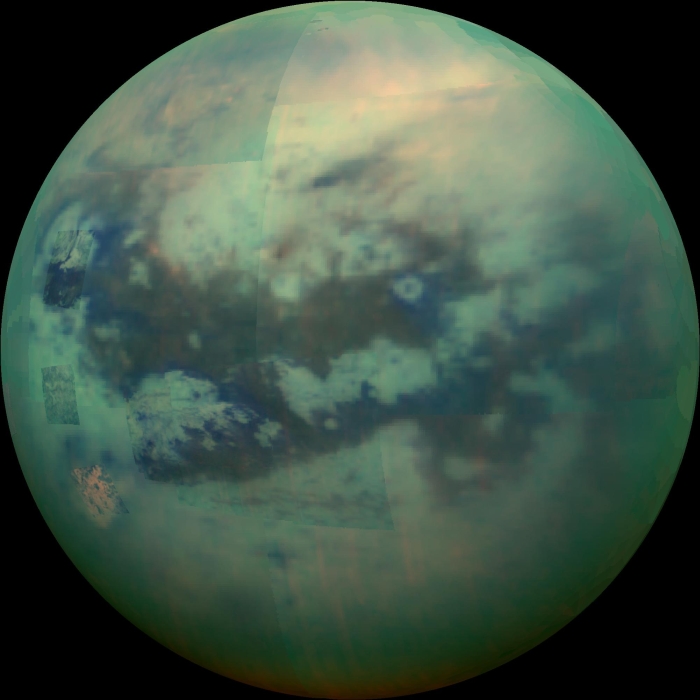 Titan, one of Saturn's moons, is usually shrouded by its hazy atmosphere. Using its infrared instrument, Cassini was able to take images to create a mosaic that shows the moon's surface in detail.

Although it gleams like an opal, these are not Titan's true colours, which tend towards brown and orange. The colours in this picture represent different near-infrared wavelengths.

Saturn is so beautiful 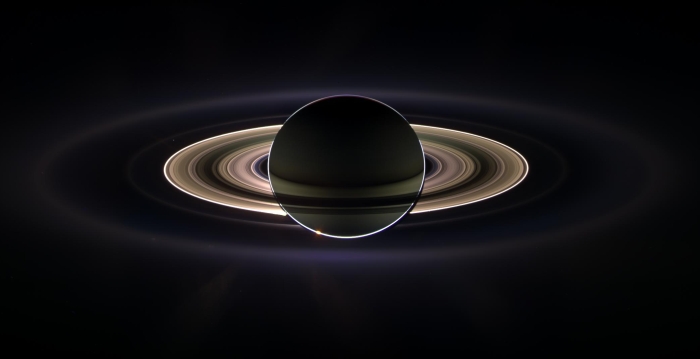 Because Earth is in between Saturn and the sun, we'll never be able to see the night side of the ringed planet through a telescope. The only way we have currently is through images taken by spacecrafts.

While this image is utterly breathtaking, it gives us so much valuable information. When Saturn and its rings are lit from behind in this way, researchers can see details in the rings they can't see from the other side.

They were able to detect colour differences they hadn't seen before. Moreover, during this period of observation in 2006, Cassini found two new rings we hadn't known about before - the Janus/Epimetheus ring and the Pallene ring.

An abundance of moons 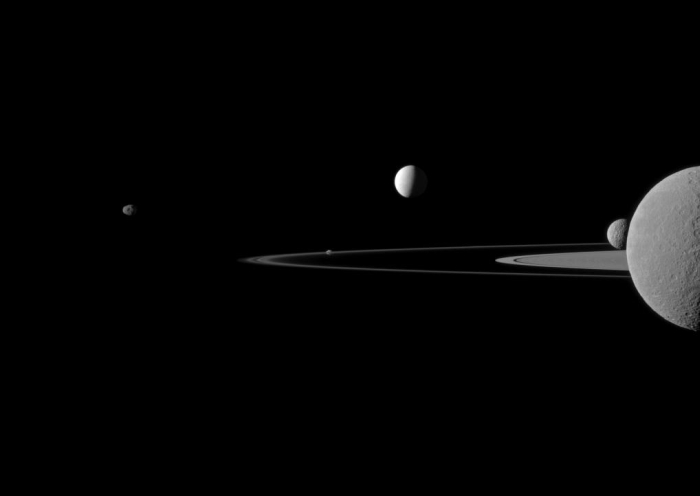 From the left: Janus, orbiting outside the A-ring; tiny Pandora, between the A ring and the F ring; bright ice moon Enceladus; Mimas, partially obscured; and in the foreground,Saturn's second-largest moon, cut off by the edge of the photo, Rhea. 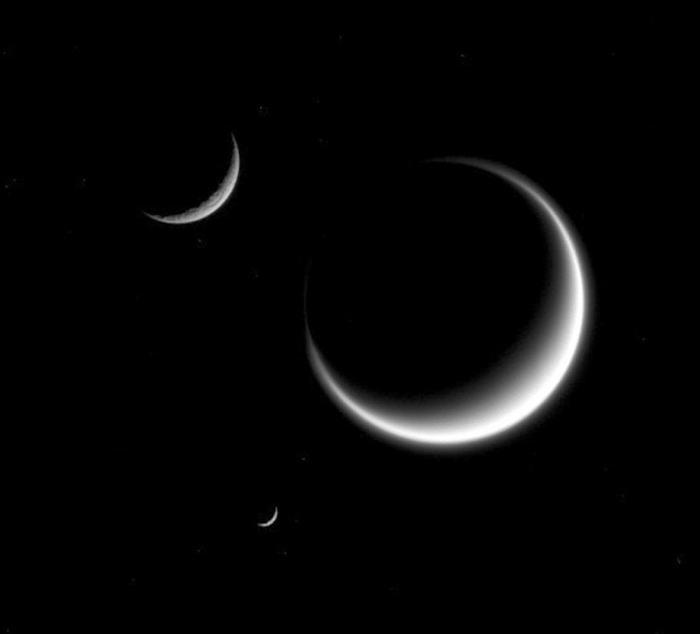 This image looks like something out of science fiction: Three of Saturn's moons in crescent.

Even though it looks minimal, there are interesting observations to be made. Titan, the largest moon in the image, appears fuzzy because of its hazy atmosphere, and the light wraps farther around the crescent because of the way the haze refracts light.

Rhea, the second-largest, by contrast shows its scarred icy surface. And even tiny Mimas looks rough because of its heavily cratered surface. 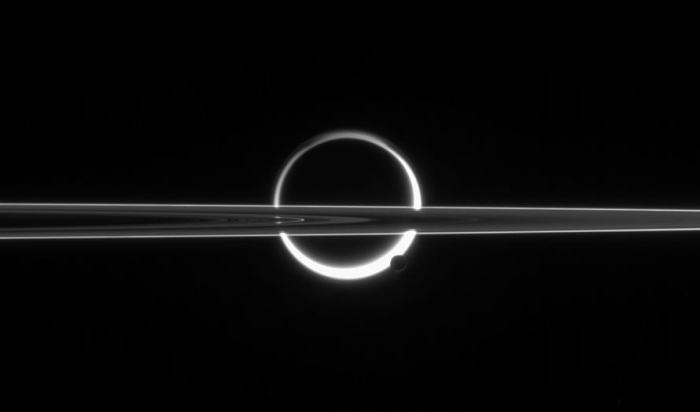 This striking image shows Saturn's rings, cutting across two of Saturn's more intriguing moons: Enceladus in the foreground, and Titan in the back, back-lit by the sun. Because of Titan's hazy atmosphere, light from the sun refracts through, creating an eclipse-like ring effect. 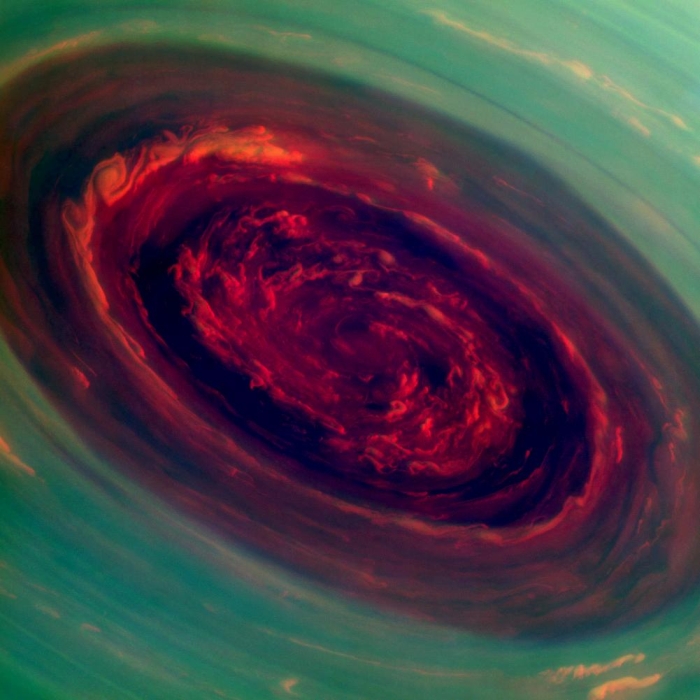 At the centre of the hexagon surrounding Saturn's north pole is a turbulent permanent storm in a vortex.

Not much was known about this storm until the change of seasons during Cassini's mission, when the north pole was finally in the sunlight. This image, in false colour, was one of the first taken of the region, on 27 November 2012.

The red colour indicates lower altitude clouds, and the green indicates higher. You can see a black-and-white photo of the region here - looking no less turbulent. 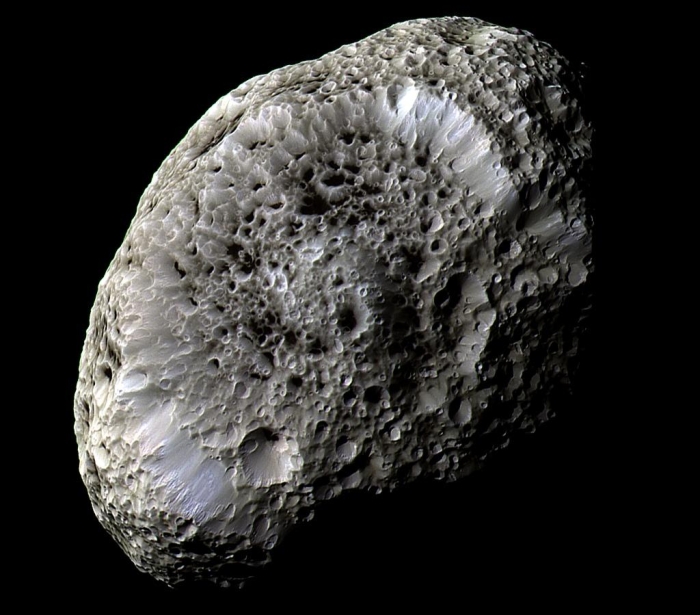 Cassini made a close flyby of Hyperion in 2005, and captured a close view of the irregular moon, showing crisp details on its strange surface.

It's strange, sponge-like appearance is unexplained, but researchers believe that it has an unusually low density, which makes it highly porous, with a weak surface gravity.

This would mean that the particles from impact tend not to stick around, which would preserve the shapes of Hyperion's craters instead of coating the moon. 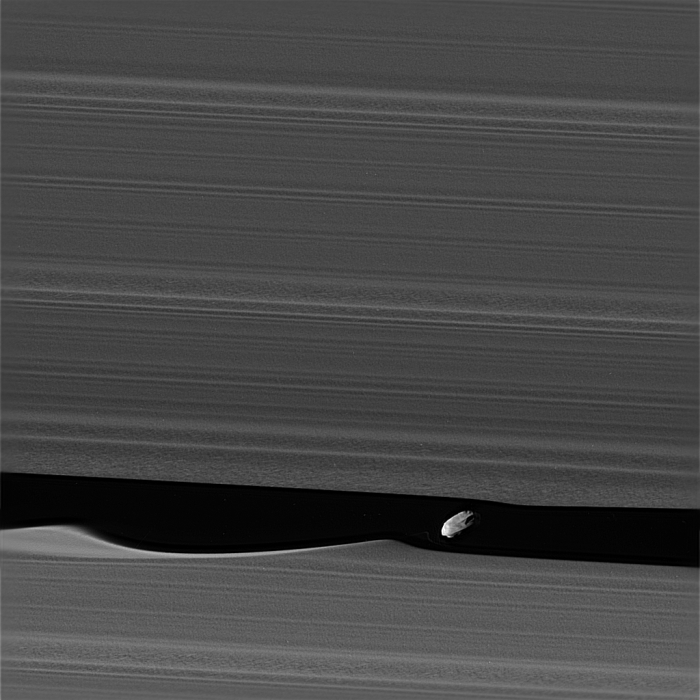 Saturn has several moons that orbit on the edges of its rings, shaping them as they go. These are called shepherd moons.

This is Daphnis, and it was discovered by the Cassini team. A slightly wobbly little moon, it orbits in the Keeler Gap, a 42-kilometre (26 mile) gap in Saturn's A ring. Because it is slightly eccentric, its distance from Saturn varies by 9 kilometres (5.6 miles), and it moves up and down about 17 kilometres (10.5 miles).

This movement makes a wave pattern where Daphnis grazes the edges of the Keeler Gap, in both the horizontal and vertical directions, pulling at the edge of the ring with its gravity. 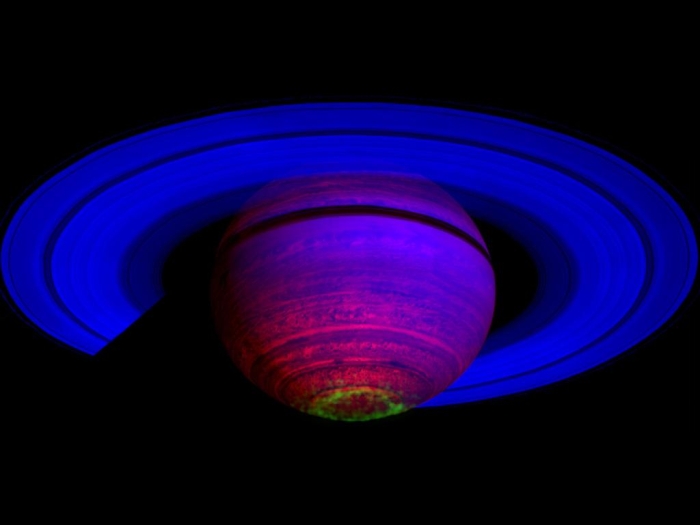 Earth isn't the only planet to experience southern and northern auroras, the phenomenon of lights in the sky.

Cassini took infrared images of Saturn's south pole in 2010 that for the first time allowed a study of Saturn's aurora.

Researchers found that aurora on Saturn occur in a similar way to how they occur on Earth - the planet's magnetosphere channels particles from the solar wind to the poles, where it interacts with plasma in the upper atmosphere to cause a light show.

But they also found Saturn's moons can play a role, too, causing electromagnetic waves when they move through Saturn's magnetosphere.

The edges of Saturn's rings aren't all flat. This image shows the edge of Saturn's B ring, where towering structures up to 2.5 kilometres (1.6 miles) high cause shadows.

It's not entirely known what causes these particular structures, but Cassini scientists believe that small satellites or moonlets orbit past the edge of the ring and force it upwards in a sort of "splashing" effect.

We've seen similar structures occur in the wake of Daphnis in the A ring's Keeler Gap.

This phenomenon is only visible at the equinox, once every 15 years. This is because that is when the sun is directly shining on Saturn's equator, around which the rings run, which allows the shadows to stretch from the structures, making them visible.

You can watch a live feed from NASA on Cassini's final moments here.