The fire and fury of the birth of a star is captured in an exquisite new image from the Hubble space telescope.

Roughly 400 to 600 or so light-years away, in the southern constellation of Chamaeleon, a large complex of clouds is transforming into stars. This is called the Chamaeleon complex; it's full of very young, newly formed T Tauri stars.

If you look closely with the right instruments, you can also see stars that are in the process of forming, known as protostars. The subject of Hubble's new photo is one of these, named J1672835.29-763111.64, embedded in the reflection nebula IC 2631 (that's a nebula that shines with reflected starlight; IC 2631 is lit by a star named HD 97300).

Stars form in cool, dense clouds of interstellar molecular gas. This gas is not evenly distributed; denser clumps can coalesce due to processes such as local stellar winds, which push the gas together. When the density is high enough, these clumps can collapse under their own gravity, forming a spinning protostar. 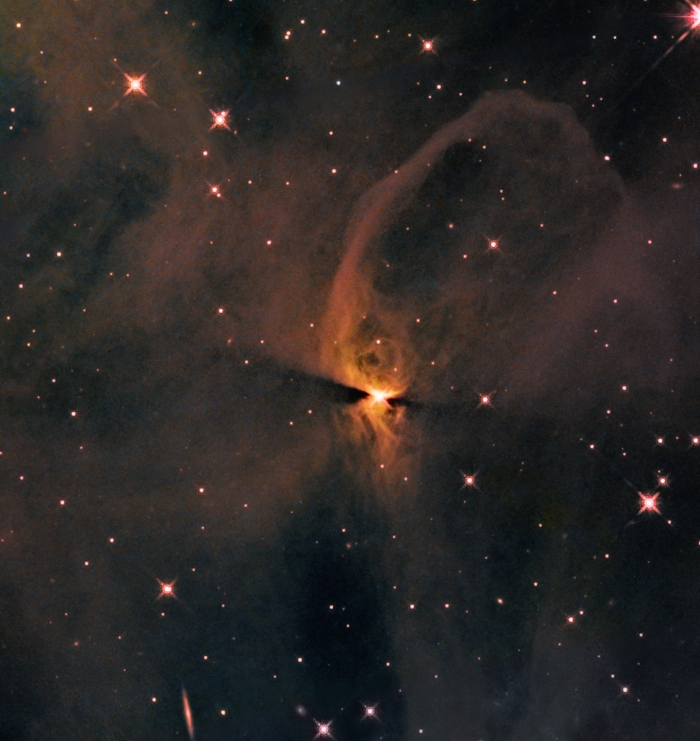 As a protostar spins, material in the cloud around the object forms a disk. This disk of material spools into the forming star, drawn in by its strengthening gravity, which grows as the protostar gains mass.

The wind and jets are known as stellar feedback, and they help to blow away material from around the protostar, slowing and eventually cutting off its growth. When the star gains enough mass to produce sufficient heat and pressure in the core, nuclear fusion will kick off – et voila, your star is now on the main sequence.

Whatever gas and dust is left over in the disk will then form other objects such as planets, asteroids, and comets. That's why the Solar System's planets and asteroid belt are arranged more or less on a flat plane. 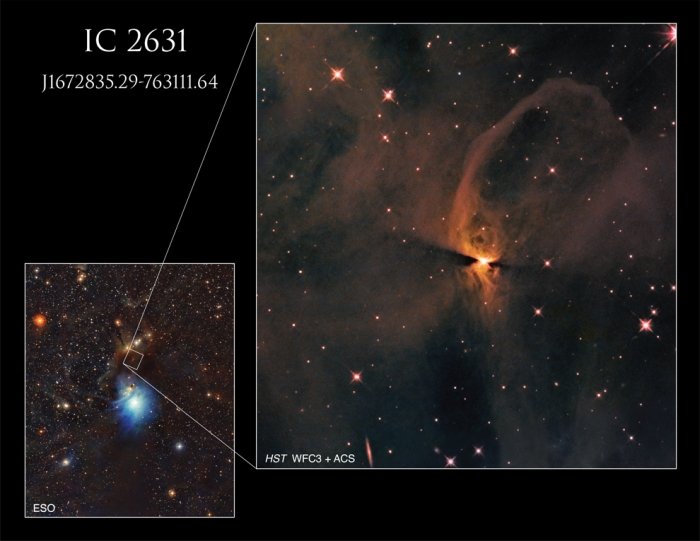 Usually, we wouldn't be able to see the protostar glowing amidst all that dust, but infrared wavelengths can penetrate the cloud, which means Hubble's infrared instrument can see it.

The protostar was observed as part of a survey targeting 312 such objects, obscured by dense molecular clouds. Star formation is a relatively long process on human timescales, taking place over millions of years, which means we will likely never be able to see it from start to finish.

We can learn more about it by identifying as many protostars as we can find, and obtaining as much information on them as we can. Clever astronomers then study the process by using these stars to work out a star formation timeline, and studying each of the stages in detail.

So J1672835.29-763111.64 is more than just a snapshot of an amazing phenomenon. It will join other protostars in Hubble's survey to contribute towards building a more holistic and detailed model of how the incredible process of star formation unfolds.