The First Known Injury From Hawaii's Volcano Eruption Has Been Reported

Hawaii officials on Saturday reported the first known injury related to heightened volcanic activity from Kilauea after a Big Island resident was hit by lava spatter while standing on a third-floor balcony.

That person, identified only as a homeowner on Noni Farms Road, shattered his leg from his shin to his foot when lava spatter struck him, a spokeswoman for the Hawaii County Mayor Harry Kim, according to Reuters.

Lava spatters "can weigh as much as a refrigerator and even small pieces of spatter can kill," the spokeswoman told Reuters.

Noni Farms Road is a residential road that lies to the east of the Leilani Estates neighborhood in Pahoa, where the majority of the attention has been focused ever since Kilauea's volcanic activity increased dramatically three weeks ago.

To date, at least 23 fissures have formed along a northeast-southwest line in the rift zone, most in the Leilani Estates and Lanipuna Gardens neighborhoods. Lava emerging from the vents has destroyed dozens of homes.

Late Saturday, a fast-flowing stream of lava pouring from one of the active fissures also reached Highway 137, which hugs the island's eastern coast.

The lava shut down about a 6 kilometre (4 mile) section of the highway, between Kamaili and Pohoiki roads, blocking one of the main escape routes for the area's coastal residents. Officials said late Saturday that the lava had entered the ocean, and advised all people to avoid the area because of a new hazard: laze.

Laze occurs when hot lava meets the ocean, sending a plume of hydrochloric acid and steam - along with fine glass particles - into the air.

Laze plumes travel with the wind and can shift directions without warning, the county civil defense agency said. 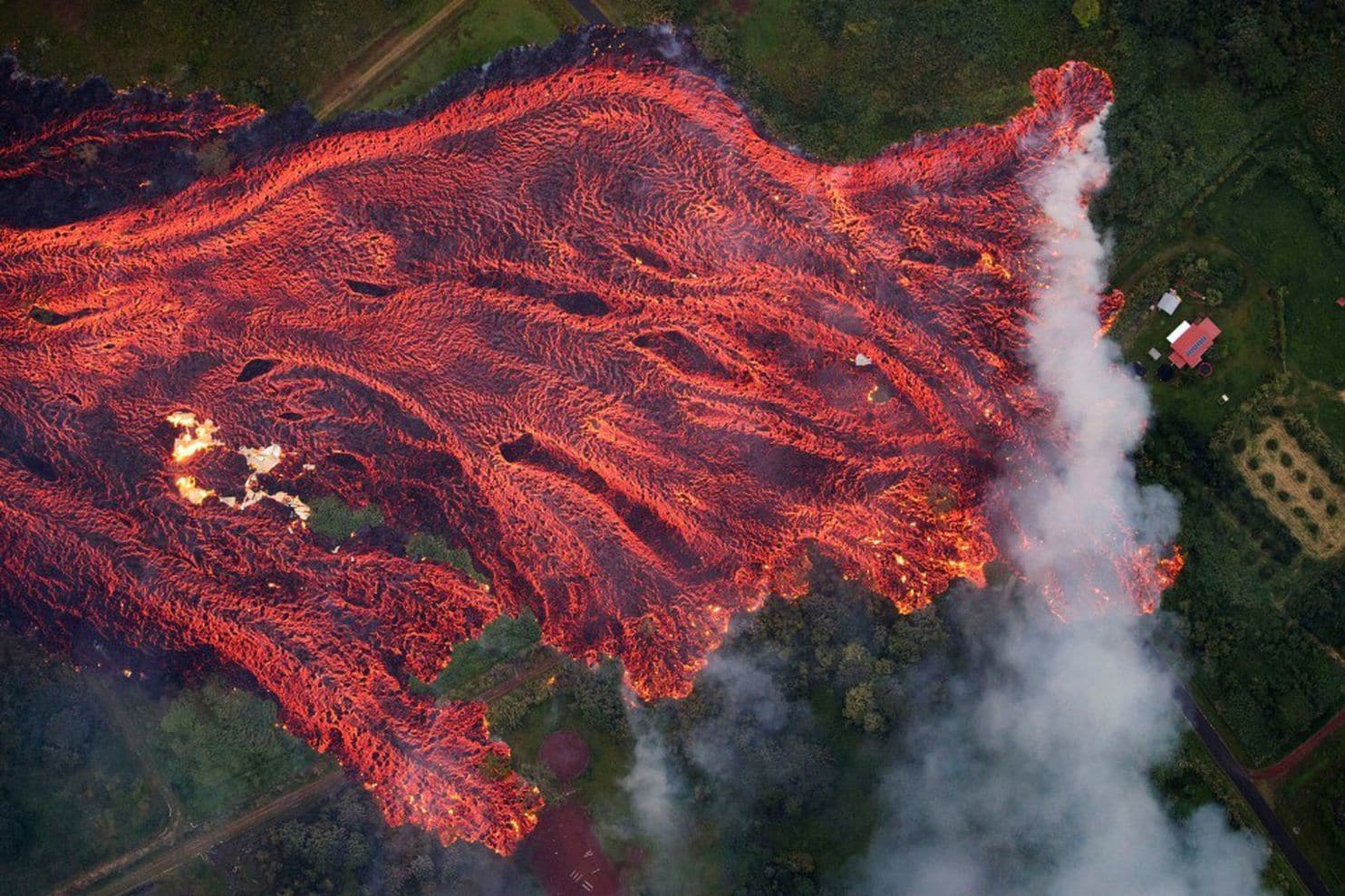 The activity capped off a week of devastation, as The Washington Post's Kristine Phillips reported: before dawn Thursday, a big explosion sent a plume of ash about 9,144 metres (30,000 feet) into the sky.

On Friday, several fissures, including one that just formed, spewed fresh lava from Kilauea's summit, destroying 40 structures in the morning, the center said. By afternoon, lava had isolated 40 homes in the area. Four people were airlifted by county and National Guard helicopters.

"With fresher, hotter magma, there's the potential that the lava flows can move with greater ease and therefore cover more area," Janet Babb, a geologist for the US Geological Survey, told Hawaii News Now.

Resident Ikaika Marzo likened the sound of lava to as many as 20 jets taking off at once in people's back yards.

"It's huge grenades going off," he told Hawaii News Now. "It shakes the whole community."

On April 30, the floor of the Puu Oo Crater, on the volcano's East Rift Zone, collapsed, sending its pool of lava back underground. Days later, after several small earthquakes, the magma pushed its way back to the surface on the east side of the island's Leilani Estates neighborhood, creating the first of many fissures to come.

Hot steam - and noxious sulfur dioxide gases - have risen from the vents, before magma broke through and splattered into the air.

Thousands of Big Island residents who were living near the lava flows have already evacuated.