Temperature differences from normal around the globe averaged over the last five years. (NASA)

The fossil fuel industry, political lobbyists, media moguls and individuals have spent the past 30 years sowing doubt about the reality of climate change - where none exists.

The latest estimate is that the world's five largest publicly-owned oil and gas companies spend about US$200 million a year on lobbying to control, delay or block binding climate policy.

Their hold on the public seems to be waning. Two recent polls suggested over 75 percent of Americans think humans are causing climate change.

School climate strikes, Extinction Rebellion protests, national governments declaring a climate emergency, improved media coverage of climate change and an increasing number of extreme weather events have all contributed to this shift. There also seems to be a renewed optimism that we can deal with the crisis.

But this means lobbying has changed, now employing more subtle and more vicious approaches – what has been termed as "climate sadism". It is used to mock young people going on climate protests and to ridicule Greta Thunberg, a 16-year-old young woman with Asperger's, who is simply telling the scientific truth. 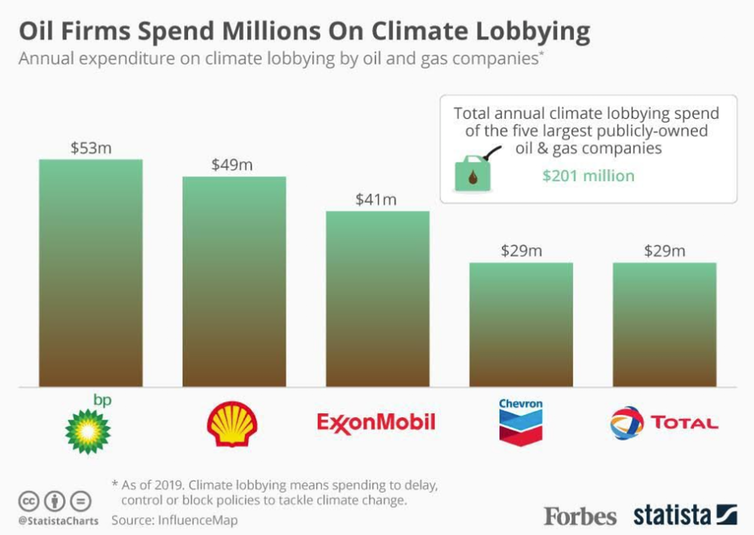 At such a crossroads, it is important to be able to identify the different types of denial. The below taxonomy will help you spot the different ways that are being used to convince you to delay action on climate change.

This is the type of denial we are all familiar with: that the science of climate change is not settled. Deniers suggest climate change is just part of the natural cycle. Or that climate models are unreliable and too sensitive to carbon dioxide.

Some even suggest that CO₂ is such a small part of the atmosphere it cannot have a large heating affect. Or that climate scientists are fixing the data to show the climate is changing (a global conspiracy that would take thousands of scientists in more than a 100 countries to pull off).

All these arguments are false and there is a clear consensus among scientists about the causes of climate change. The climate models that predict global temperature rises have remained very similar over the last 30 years despite the huge increase in complexity, showing it is a robust outcome of the science. 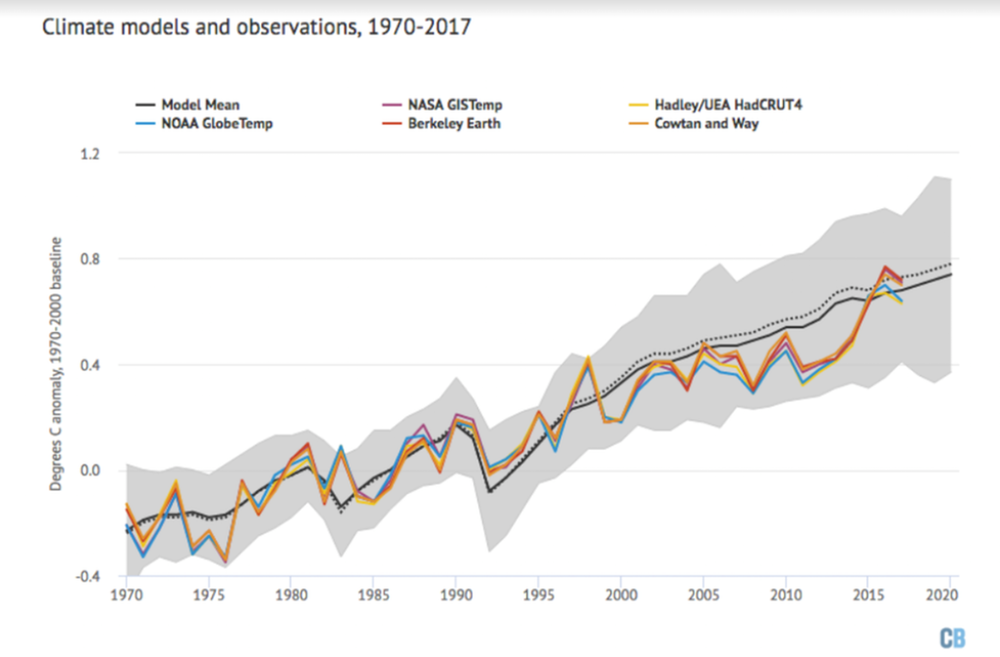 The shift in public opinion means that undermining the science will increasingly have little or no effect. So climate change deniers are switching to new tactics.

One of Britain's leading deniers, Nigel Lawson, the former UK chancellor, now agrees that humans are causing climate change, despite having founded the sceptic Global Warming Policy Foundation in 2009.

It says it is "open-minded on the contested science of global warming, [but] is deeply concerned about the costs and other implications of many of the policies currently being advocated". In other words, climate change is now about the cost not the science.

The idea that climate change is too expensive to fix is a more subtle form of climate denial. Economists, however, suggest we could fix climate change now by spending 1 percent of world GDP.

Perhaps even less if the cost savings from improved human health and expansion of the global green economy are taken into account. But if we don't act now, by 2050 it could cost over 20 percent of world GDP.

We should also remember that in 2018 the world generated US$86,000,000,000,000 and every year this World GDP grows by 3.5 percent. So setting aside just 1 percent to deal with climate change would make little overall difference and would save the world a huge amount of money.

What the climate change deniers also forget to tell you is that they are protecting a fossil fuel industry that receives US$5.2 trillion in annual subsidies – which includes subsidised supply costs, tax breaks and environmental costs. This amounts to 6 percent of world GDP.

Climate change deniers also argue that climate change is good for us. They suggest longer, warmer summers in the temperate zone will make farming more productive. These gains, however, are often offset by the drier summers and increased frequency of heatwaves in those same areas.

More than 40 percent of the world's population also lives in the Tropics – where from both a human health prospective and an increase in desertification no one wants summer temperatures to rise.

Deniers also point out that plants need atmospheric carbon dioxide to grow so having more of it acts like a fertiliser. This is indeed true and the land biosphere has been absorbing about a quarter of our carbon dioxide pollution every year.

Another quarter of our emissions is absorbed by the oceans. But losing massive areas of natural vegetation through deforestation and changes in land use completely nullifies this minor fertilisation effect. 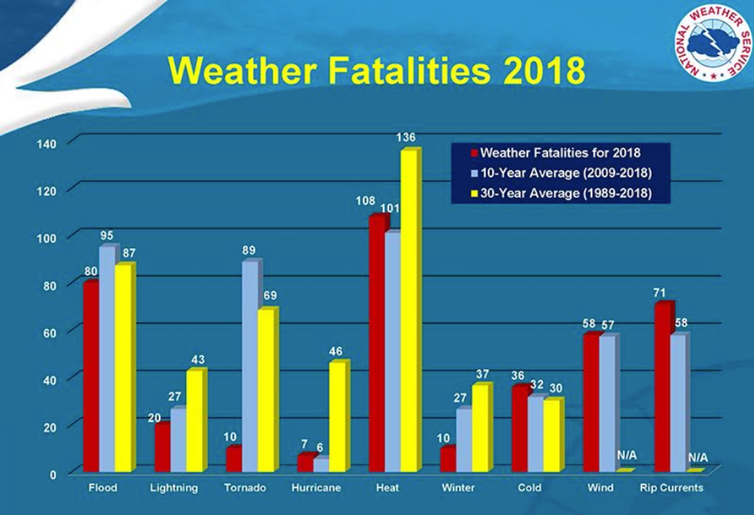 US weather fatalities for 2018 alongside the ten- and 30-year average. (National Weather Service/CC BY 4.0)

For example, 25 percent of the human-produced CO₂ in the atmosphere is generated by the US, another 22 percent is produced by the EU. Africa produces just under 5 percent.

Given the historic legacy of greenhouse gas pollution, developed countries have an ethical responsibility to lead the way in cutting emissions. But ultimately, all countries need to act because if we want to minimise the effects of climate change then the world must go carbon zero by 2050.

(Data from the Global Carbon Project)

Deniers will also tell you that there are problems to fix closer to home without bothering with global issues. But many of the solutions to climate change are win-win and will improve the lives of normal people.

Developing a green economy provides economic benefits and creates jobs. Improving the environment and reforestation provides protection from extreme weather events and can in turn improve food and water security.

The final piece of climate change denial is the argument that we should not rush into changing things, especially given the uncertainty raised by the other four areas of denial above.

Deniers argue that climate change is not as bad as scientists make out. We will be much richer in the future and better able to fix climate change. They also play on our emotions as many of us don't like change and can feel we are living in the best of times – especially if we are richer or in power.

The fundamental question is why are we allowing the people with the most privilege and power to convince us to delay saving our planet from climate change?