When it comes to flying cars, humanity has gotten pretty good at waiting patiently. If we're being realistic, it's probably going to take several decades to get them into circulation, and many of us won't even be alive to see it (sorry). Not only do we have to perfect the technology - and then figure out how make it economical enough so bored millionaires aren't the only ones with access - we've also got a bunch of legal considerations to take into account, and those follow every new invention at a veritable snail's pace.

But Italian flying-car company Terrafugia isn't letting all of that hold it back - it's just released details of its new designs for the TF-X model, and this thing looks awesome. It has a cruising speed of 322 km/h (200 mph) with an 805 km (500 mile) flight range, and requires no runway space whatsoever to take off and land.

First announced back in 2013, the TF-X is a four-passenger hybrid vehicle, which will be able to recharge its batteries either from its engine or by plugging in to electric car charging stations. It will be small enough to fit inside a regular garage, and will be able to drive on all kinds of streets and highways.

When you want to go into flying mode, the wings will fold out, and twin electric motor pods on the ends will power up and lift the car off the ground using 1 megawatt of power. Two small helicopter-style propellers will provide thrust when needed, and are then folded back in when the car is cruising. 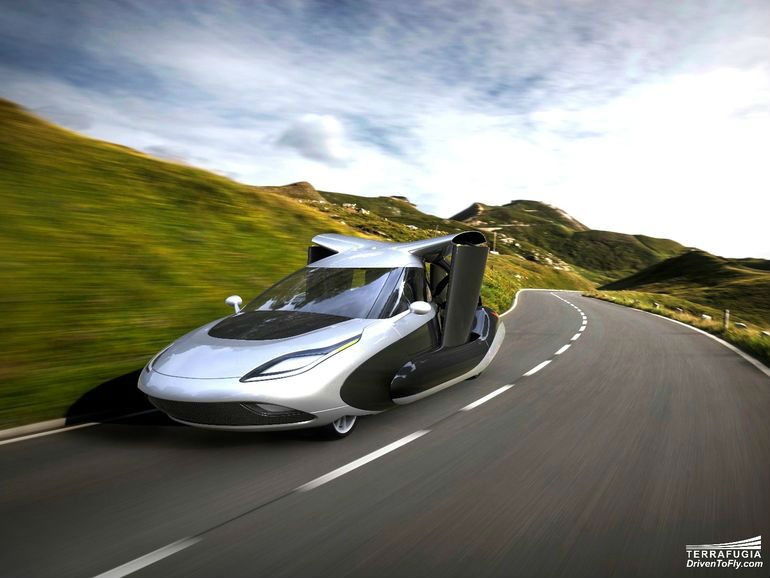 Flying will be computer operated, so drivers don't have to worry about knowing how to navigate an airborne vehicle. The Terrafugia website explains that prior to departure, the driver will select a primary landing zone, plus two backup landing zones. If the TF-X calculates insufficient energy on board to at least be able to land at one of the two backup landing zones in an emergency, and then make it to the final destination in 30 minutes, it will not take-off. It will also not embark on a flying trip if the weather forecast looks dangerous, or if any of the selected landing zones are in temporarily restricted airspaces.

"Operating a TF-X vehicle should be statistically safer than driving a modern automobile," they claim.

Right now, we're still looking at eight to 12 years of development for the Terrafugia TF-X. They are yet to produce a prototype of the design, but they're about to test a one-tenth scale test model at the MIT Wright Brothers wind tunnel in the US. "The wind tunnel test model will be used to measure drag, lift and thrust forces while simulating hovering flight, transitioning to forward flight and full forward flight," the company says.

And so we wait. Although I must say, as cynical as I am about how long it's going to take this thing to become a reality, watching the concept video below, it's hard to stop yourself from daydreaming… just a little.