It's time for the biggest moment on the skywatching calendar until this August's mind-boggling total solar eclipse - the peak of the Eta Aquarid meteor shower.

This weekend, Earth passes through the thickest debris left by Halley's Comet, and these glowing comet remnants are expected to light up the night sky at rates of up to 40 per hour.

The Eta Aquarid meteor shower is active each year between April 19 and May 28, with its peak centred around May 6.

The greatest number of meteors expected to fly before dawn on Saturday May 6, when Australians and others in the Southern Hemisphere will be treated with around 20 to 40 meteors per hour.

Those in mid-northern latitudes can expect about 10 to 15 meteors per hour - but you could get lucky and see more.

How to see it

The shower is named after the faint Eta Aquarii star in the Aquarius Constellation, which acts as its radiant point - the area of the night sky that the meteors appear to emanate from.

To find the best spot to scour the night sky, Bruce McClure from EarthSky.org suggests finding the Aquarius Constellation, and pinpointing its Y-shaped 'Water Jar', which is made up of four stars, including Eta Aquarii.

"If you can find the Water Jar in the constellation Aquarius, you've as good as located the radiant point for the Eta Aquarid meteors," says McClure. 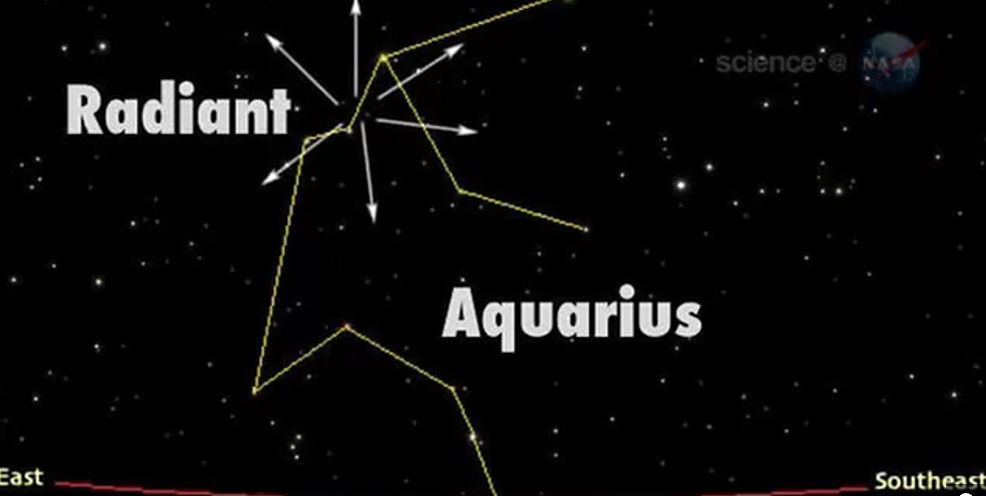 Of course, even if you struggle to find the Eta Aquarid radiant - you'll need a really dark sky to make it out - that doesn't mean you won't catch meteors.

They might originate in that part of the sky, but they'll fly every which way, which means it really doesn't matter where you're looking, as long as you're somewhere away from the lights of the city.

In fact, the further the meteors are from the radiant, the longer their tails will be.

And just remember - it takes 15 minutes for your eyes to adjust to the darkness, so plan your timings carefully!

When to see it

Those in the Southern Hemisphere might not get to experience the impending total solar eclipse like our American friends, but at least we get the best version of the Eta Aquarid meteor shower.

For the diehards out there, 4am Saturday morning local time is your absolute best bet for viewing of the shower, after the Moon has set. But any time from 1am onwards should net you a good amount of shooting stars.

The cool part is that while the Eta Aquarid meteor shower doesn't produce as many meteors as the Perseid or Geminid showers, these ones are particularly bright and easy to spot.

For those in the Northern Hemisphere, Miami skywatchers will get a better show than New York and San Francisco, but you should be able to see some no matter where you are.

Your best bet it to head out in the early hours of Saturday morning, between 3 and 4am local time.

The reason the Northern Hemisphere doesn't get to see as many meteors as the Southern Hemisphere is because the radiant is actually cut off in the night sky by the horizon.

But this comes with a pretty cool side effect - earthgrazers.

"While a low radiant means fewer meteors, there's an up side. You have a fair chance of seeing an earthgrazer, a meteor that skims tangent to the upper atmosphere, flaring for many seconds before either burning up or skipping back off into space," says Bob King at Universe Today.

So get your deck chairs and picnic blankets ready, and make sure you can sleep in on Sunday morning - because this is gonna be a late one.

Good luck out there!