The World Meteorological Organisation today published a definitive climate report card showing concentrations of greenhouse gases continue to rise, and the last five years were the warmest on record.

The Statement on the State of the Global Climate also confirmed that the ongoing drought and recent bushfires in Australia were a globally significant climate event.

The report is an annual, comprehensive overview of the latest information from the world's meteorological services and other key institutions. We are among the many authors who contributed.

It's an important record of the magnitude and speed of changes to global climate, drawing on the latest data from across the fields of climate science.

Global average temperatures in 2019 were 1.1 degrees Celsius above pre-industrial levels. Only 2016 was hotter, but that year came at the end of an extreme El Niño, which typically has a warming influence on global temperatures.

The last five years were the world's five warmest on record. Areas which were especially warm, with temperatures in 2019 more than 2 degrees Celsius above average, included parts of Australia, Alaska and northern Russia, eastern Europe and southern Africa.

Central North America was the only significant land area with below-average temperatures. 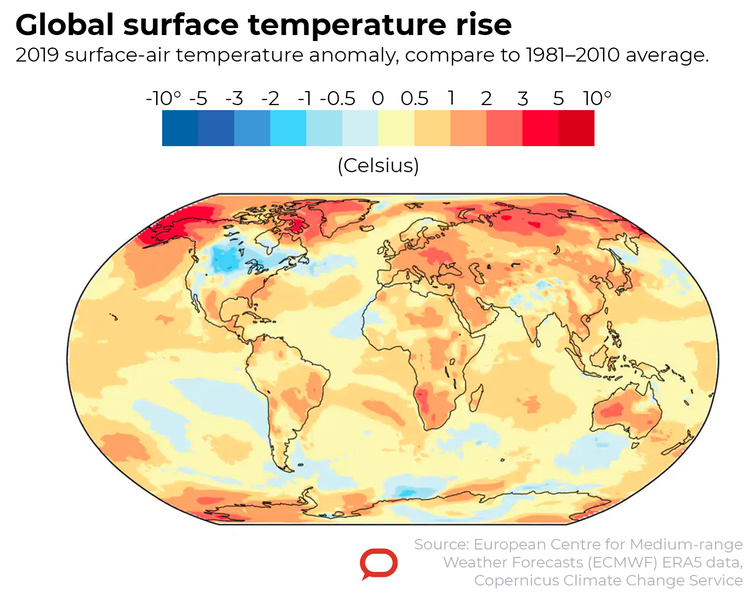 Human-driven climate change is predominantly caused by increasing greenhouse gases in the atmosphere.

Concentrations of carbon dioxide, methane and nitrous oxide, the three most potent greenhouse gases, have continued to grow and are now, respectively, 147, 259 and 123 percent of pre-industrial levels, measured in the year 1750.

Global emissions of carbon dioxide from fossil fuels reached a record high of 36.6 billion tonnes, of which about half is absorbed by vegetation and oceans.

The Antarctic ozone hole was its smallest since 2002, after an unusually early spring breakdown of the Antarctic polar vortex following a sudden warming in the polar stratosphere.

Many other indicators of large-scale climate change continued their long-term trends in 2019. These include the heat content of the global ocean – an important indicator because around 90 percent of warming generated by greenhouse gases from human activities is taken by the oceans.

Glacial mass declined for the 32nd consecutive year. In Switzerland, for example, glacier loss over the past five years has exceeded 10 percent, the highest rate of decline in more than a century. 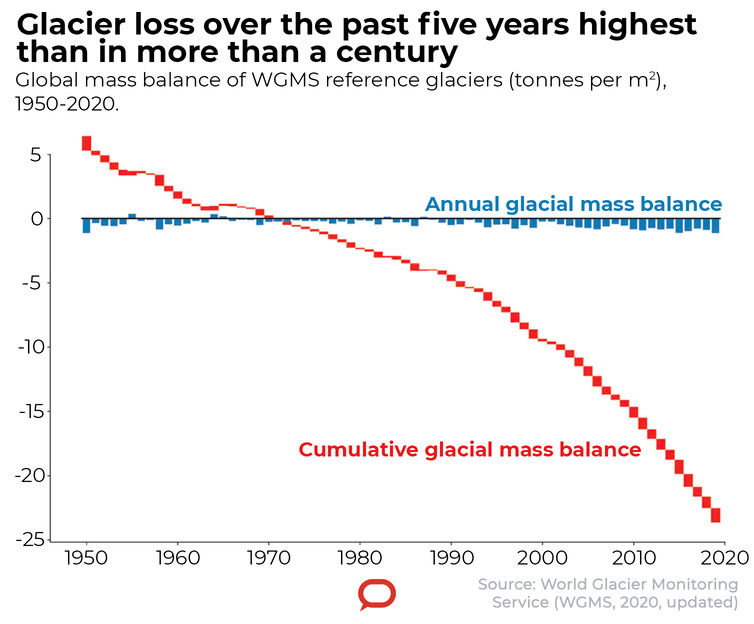 The report confirms the ongoing drought in Australia and exceptional fire weather conditions late in the year were among the most significant global climate events last year.

2019 was Australia's warmest and driest year since national records began – the first time both records have been broken in the same year. 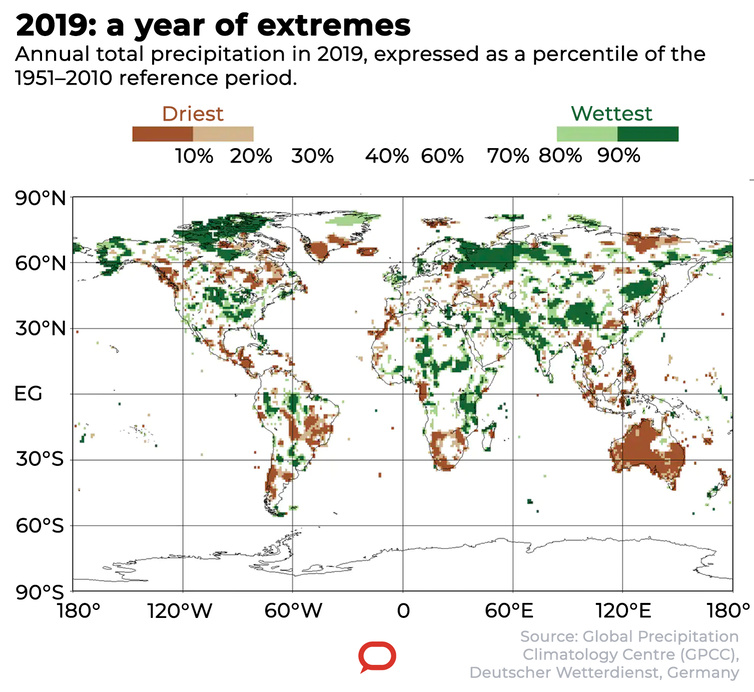 In December, the monthly accumulated Forest Fire Danger Index – an indicator of severe fire weather – was the highest on record for any month in Queensland, New South Wales, South Australia and the ACT. Some fires burned for longer than two months.

In January and February 2019, a dry summer in Tasmania contributed to fires in the normally moist western and central parts of the island – the second time in four years that fires burnt regions where historically such events were extremely rare.

The drought was strongly influenced by a very strong positive phase of the Indian Ocean Dipole – an oscillation of sea surface temperatures which affects the climate in Australia.

A strong negative Southern Annular Mode – a climate driver which originates in Antarctica – brought westerly winds and dry conditions to the eastern states from September.

Australia was not the only nation affected by drought in 2019 – southern Africa, southeast Asia and central Chile were also significantly affected. In the Chilean capital Santiago, rainfall was more than 70 percent below average.

Australia had extreme heatwaves both early and late in the year, and in South America, temperatures exceeded 30 degrees Celsius as far south as Tierra del Fuego.

Tropical cyclones are amongst the most destructive weather phenomena in most years, and 2019 was no exception. The most severe cyclone impact was in Mozambique and Zimbabwe, when Cyclone Idai hit in mid-March, killing more than 900 people.

Hurricane Dorian, one of the strongest ever to affect land in the North Atlantic, caused massive destruction in the Bahamas, whilst Typhoon Hagibis led to exceptional flooding in Japan, and daily rainfall of more than 900 millimetres. The North Indian Ocean also had its most active cyclone season on record.

Looking to the future

Global climate projections show that under all scenarios, temperatures will continue to warm – and years such as 2019 will become the norm this decade.

The report is intended to inform decisions around the world on adaptation to, and mitigation of, climate change.