We're still making many discoveries about the animals that roamed the Earth more than 66 million years ago, and a newly identified dinosaur bears a remarkable resemblance to a modern-day bird, the cassowary.

The similarities are so strong that palaeontologists are now studying the flightless cassowaries to get a better idea of how their ancient equivalents might have behaved.

This newly discovered dino is called Corythoraptor jacobsi and is classed as an oviraptoridae, one of several bird-like classes of dinosaur found so far. An almost complete skeleton of the creature was discovered under a train station in Ganzhou, southern China.

"The discovery of Corythoraptor jacobsi provides unprecedented evidence that oviraptorid dinosaurs were morphologically and taxonomically far more diverse in the Ganzhou area than in any other known region of the world," write the researchers.

One of the most striking similarities between Corythoraptor jacobsi and the birds still living among us in New Guinea and Australia is the distinctive head crest or casque, and by comparing the two species, the researchers think we might have a better idea why these two creatures evolved in this way. 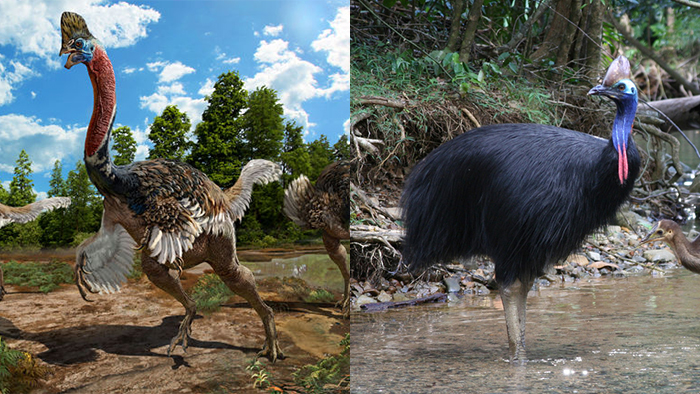 Spot the difference? (The cassowary is on the right.) Credit: Zhao Chuang and Pete Keogh/Flickr.

Possibilities include the 15cm (6-inch) casque being used as a display or form of communication, or maybe as a sign of reproductive fitness – just like the feathers of the peacock.

Other similarities noted by the researchers include the long, slender neck and the ostrich-like body.

Measuring 1.68 metres (5 and a half feet) in height, the newly discovered dinosaur would've been swift on its feet, with three sharp claws on each hand to grab food. The animal is believed to have lived between 66 and 100 million years ago during the Late Cretaceous period, the last era of the dinosaurs.

Not only can the discovery help shed more light on this particular period in time, it's made more real by the fact that we have something very similar on Earth today.

The cassowary isn't a direct relative though – while the birds of today are descendants of the dinosaurs, only the smallest, seed-eating birds were able to survive the famous asteroid smash, so Corythoraptor jacobsi would have been wiped out.

As for the evolution of the cassowary, researchers have managed to trace back its evolutionary history to about 30 million years ago.

And it's yet more proof that we've got plenty more to learn about the dinosaurs, from the size of their footprints to the complexity of their brains.

As well as giving us a brand new dinosaur to visualise and to study, the Corythoraptor jacobsi is notable for being the dinosaur that matches up most closely with a species still surviving in 2017, some 66 million years later.

"The general outline is a very strong match," David Hone of Queen Mary University in the UK, who wasn't involved in the research, told USA Today.

Details of the findings have been published in Scientific Reports.