The internet loves an art restoration gone wrong. A few years ago the 'Monkey Christ' debacle - also known as 'Potato Jesus', or, more historically, Ecce Homo - became such a laughable sensation, it actually increased tourism to the Spanish town of Borja by more than four-fold.

That particular mess was done by an amateur. But even when restorations go right, there's opportunity for a chuckle, as this latest experience shows.

The revelation underneath, which was hidden for some inexplicable reason in the 1500s, was not what anyone was expecting, least of all the curators.

Head of restoration Hélène Dubois told The Art Newspaper in December that discovering the true nature of this masterpiece was "a shock for everybody - for us, for the church, for all the scholars, for the international committee following this project".

The institute invested millions of dollars into meticulously chipping away at the added layer of oils, centimetre by centimetre using size-zero brushes, reversible watercolour, scalpels and magnifying glasses - carefully watching the entire time to make sure they weren't erasing the original marks from brothers Jan and Hubert Van Eyck. 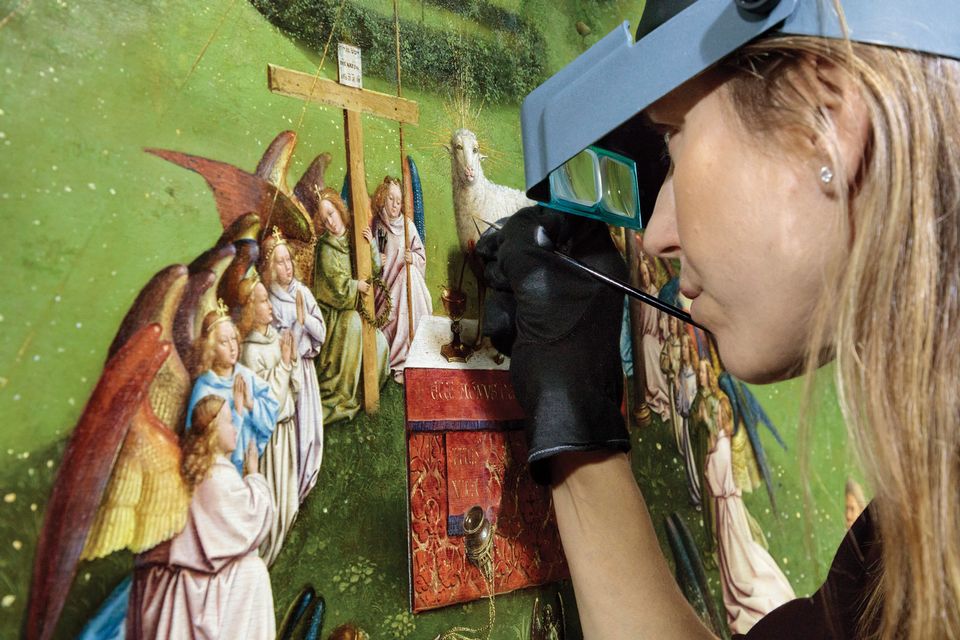 "Liberated from the thick layers of yellow varnish and the coarser overpaints", the Lamb of God now stares back at us with fresh, almost human-like eyes.

The royal institute said it had "no words to express the result". But the internet has more than a few: "terrifying", "nightmarish", "discomfiting", "bizarre", "appalling", "a terrible attempt at painting a lamb".

"The judgy lamb of god," one Twitter user wrote, "and it sees you are wanting."

While it might look botched, experts say the lamb was probably meant to look like this. Its vibrant eyes and flared pink nose reminds us this is a representation of Jesus Christ.

But perhaps in the Middle Ages that intense and unyielding stare became too much, and artists decided to make the Jesus lamb a little more neutral.

Now, curators are digging deeper to find out what else this famous painting might be hiding. Roughly 70 percent of the original panels appear to be obscured by a later paint job, officials say, and along with the lamb, several small buildings have been uncovered by the institute's team, losing only 5 percent of the original in the process.

There's a long way to go though; these are just the lower panels. Soon, the restoration will continue upstairs and the true nature of Van Eycks' masterpiece will at last be revealed.