Built by an Unknown Culture, This Is The Oldest Sun Observatory in The Americas

Long before the Incas rose to power in Peru and began to celebrate their sun god, a little known civilization was building the earliest known astronomical observatory in the Americas.

While not quite as old as sites like Stonehenge, these ancient ruins, known as Chankillo, are considered a "masterpiece of human creative genius", holding unique features not seen anywhere else in the world.

Based in the coastal desert of Peru, the archaeological site famously contains a row of 13 stone towers, which together trace the horizon of a hill, north to south, like a toothy bottom grin.

Apart from this remarkable structure, known as the Thirteen Towers, the ruins of the observatory also include a triple-walled hilltop complex called the Fortified Temple and two building complexes called the Observatory and the Administrative Center.

Completed over 2,300 years ago and abandoned in the first century of the common era, the site has remained a mystery to travelers for centuries.

Only when official excavations began at the turn of the 21st century, did archaeologists realize what they were looking at. 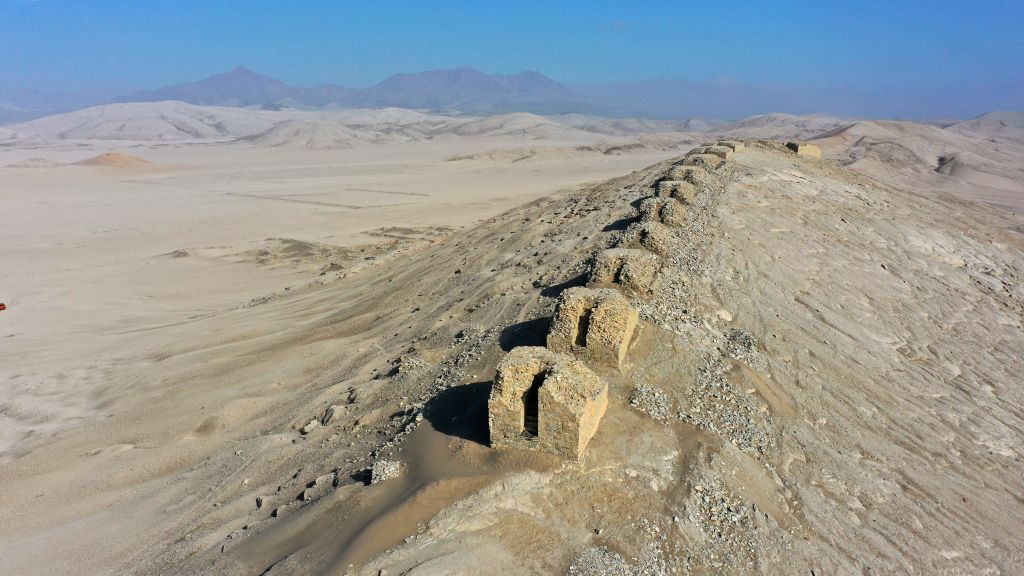 Aerial view of the towers. (Janine Costa/AFP via Getty Images)

Against a barren desert landscape and in broad daylight, the hilltop stone structures, which span roughly 300 meters (980 feet), don't look like much. But it's another story at dawn and dusk.

As the Sun rises in the east, an orb of light emerges somewhere along the ridge of towers. As the year proceeds, so too does the position of the sunrise, almost as though the light is flossing the toothy horizon.

The Towers of Chankillo were so carefully placed, that when an onlooker stands at a specific observation point below the ridge, they can predict the time of year within two or three days based just on sunrise or sunset. The observation point looking west towards the ridge – this is the Observatory structure – uses the sunset. At what's thought to be the east observation point, all that's left is the incomplete stone outline of a room, but it's in a symmetrical location and would have used the sunrise.

The September equinox, for example, is defined when the Sun sets between the sixth and the seventh tower, as captured in the image below.

The ancient civilization that designed the solar observatory is barely known, but it would have been one of the oldest cultures in the Americas. In fact, this culture predates the Inca culture, which also excelled at astronomy, by more than 1,000 years.

Because the Chankillo ruins attributed to this civilization are based in the coastal desert between Peru's Casma River and the Sechin river, the original builders are now known as the Casma-Sechin culture.

Similar to the Incas, this civilization would probably have considered the Sun a deity of some sort. The staircases leading up to each tower strongly suggest the site was once used for rituals.

According to archaeological excavations, the observatory was probably built sometime between 500 and 200 BCE. Then, for some reason, the site was abandoned, and the towers fell into disrepair. In their heyday, archaeologists say the structures would have been plastered yellow, ochre or white and painted with graffiti or fingerprints.

Even when stripped of decoration and falling apart, however, the remains of these stone towers still faithfully record the days of the year. Conservation efforts are now under way to uphold the accuracy of the ancient calendar.

In 2021, the Chankillo Archaeoastronomical Complex officially joined the UNESCO World Heritage List for its outstanding craftsmanship and its insight into the worldview of ancient societies.

"Unlike architectural alignments upon a single astronomical target found at many ancient sites around the world, the line of towers spans the entire annual solar rising and setting arcs as viewed, respectively, from two distinct observation points, one of which is still clearly visible above ground," reads the UNESCO description.

"The solar observatory at Chankillo is thus a testimony of the culmination of a long historical evolution of astronomical practices in the Casma Valley."

You can read even more details about this observatory at the Portal to the Heritage of Astronomy.