Archaeologists working in Indonesia say they have discovered the earliest artwork that depicts a story. It is a tale told in red pigment on a cave wall. The scene, in the scientists' interpretation, shows supernatural people hunting wild animals.

People living on the island of Sulawesi drew this image of pigs and horned animals as long as 44,000 years ago, according to a study published Wednesday in the journal Nature. Surrounding the animals are people or human-like figures. This artwork predates the charcoal cave art in Europe by thousands of years.

Ancient Sulawesi people, like European cave painters, drew lots of wildlife. On the limestone walls, animals loom larger than the other characters, who are nearly as spindly as stick figures. In one section, those figures cluster in front of a buffalo. They appear to face off against the animal. Lines connect their small arms to the buffalo's chest.

"It's quite amazing. It's a narrative scene, and it's the first time we see that in the rock art," said study author Maxime Aubert, an archaeologist at Griffith University in Australia.

"Everything," he said, meaning narration and creative invention, "is there from the beginning."

The large horned animals scrawled on the walls are anoa, a species of water buffalo found only on Sulawesi. Anoa are about the size of large dogs, but what they lack in stature they make up for in aggressive tempers.

The characters in the scene appear to be hunting or, perhaps, wrangling one of the buffalo, Aubert said.

Study author Adam Brumm first saw the artwork as blurry photos in a messaging app. "I was just screaming with excitement when these images ended up in my phone," said Brumm, an archaeologist at Griffith University.

Modern civilization surrounds this ancient place. It's a 30-minute drive from the airport in the city of Makassar. The painted wall is part of a network of limestone caves on land that belongs to a mining company.

Dust from the dirt road that leads to the company's cement factory, Aubert said, frequently blows into the cave. The scientists worry pollution could harm the art.

Researchers have studied the caves, which contain nearly 250 locations with art, since the 1950s. (This scene escaped attention for so long, Aubert said, because it was in a raised alcove about 60 feet above ground level.)

In 2014, Aubert, Brumm and their colleagues announced that handprints in the caves were at least 40,000 years old, and pig art there was at least 35,000 years old.

Paleolithic artists in France and Spain, nearly 8,000 miles (12,900 kilometers) away from Sulawesi, drew animals in charcoal. The walls of Chauvet cave, in France, teem with horses, rhinos, reindeer and bison.

Most studies of European cave art use carbon in charcoal to determine dates. Chauvet's art has been dated to be about 30,000 years old, with more recent studies suggesting humans inhabited the caves 36,000 years ago.

Scientists are unable to use the same technique in Sulawesi, because the iron-based red pigment lacks organic matter. Instead, they measure a coating that forms over the artwork as water trickles across the cave walls. The sweat leaves behind mineral deposits, which condense into nodules nicknamed "cave popcorn". The researchers can detect decaying elements within these globs to establish the rock's age.

The scene, based on the dating of cave popcorn above some of the wild animals, was created roughly 35,000 to 43,900 years ago. 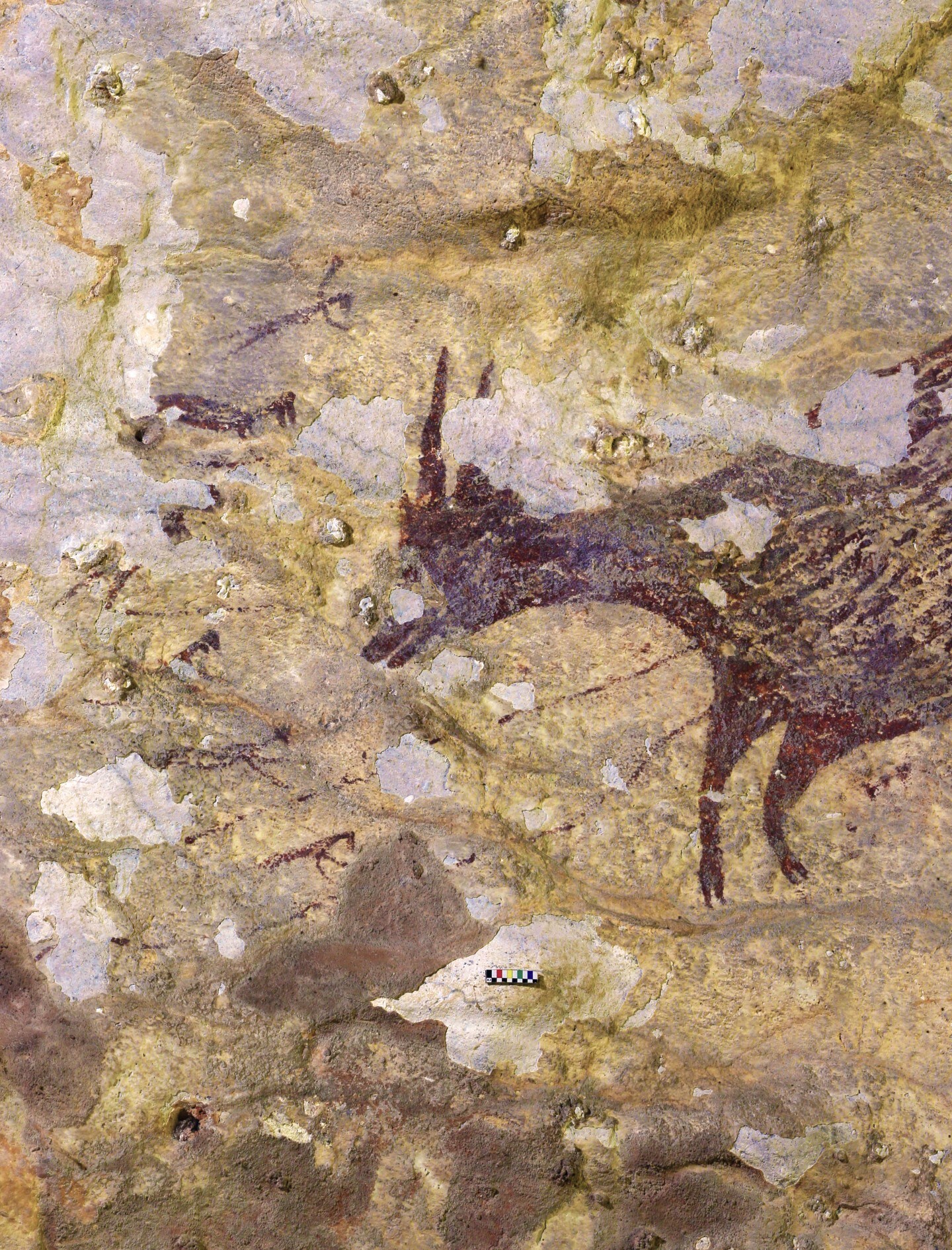 "The science and results are totally credible," said Susan O'Connor, an expert in Southeast Asian archaeology at the Australian National University, who was not involved with this study. The story on the cavern walls shows "how people at the time conceived of their relationship with animals."

"If the dates from the article are correct," said Nicholas Conard, an archaeologist at the University of Tübingen in Germany who was not involved with the study, "the images would be some of the earliest figurative images known anywhere, and of great importance."

Exactly what is happening in the artwork is up for interpretation. Consider the thin red lines, for instance. "We cannot prove they are spears or ropes," Aubert said.

Or the figures' bizarre features. To Aubert they look like humans with animal traits. "The humans there, they are not fully human: One has a tail, then others may have some sort of bird head or something," he said.

"I think it's probably something that didn't really exist. Maybe it's part of a mythical creature. … We don't know. But it is one of the possibilities."

The oldest humanoid figures in European art weren't found on walls. A decade ago, Conard discovered the "Venus of Hohle Fels", a human figurine with exaggerated female anatomy, in southwest Germany.

The woman was carved from a 35,000-year-old mammoth tusk. Older still, dated to around 40,000 years ago, is the mammoth ivory "Lion Man" figurine, discovered by German archaeologists in 1939. The 2½-foot man has a human body topped with a cave lion's head.

Aubert and Brumm likened the Sulawesi figures to the cat-headed man. These painters, like the early ivory carvers in Europe, were storytellers with imaginations, they said. Their subject matter "has no place in reality," Brumm said. Either humans developed these elements of creative storytelling at the far corners of the planet around the same time, or storytelling is a trait developed by even older human ancestors.

"If these are mixed human-animal creatures, their small size is fascinating," Conard said. "As are their movements, that seem to be a kind of flying or jumping rather than the more grounded movements of humans or terrestrial mammals." He confessed he had "no idea what the lines mean."

But Paul Pettitt, an archaeologist at Durham University in the United Kingdom who was not a member of this research team, was skeptical of the interpretation. "Is it a scene? The 'humanoids' are depicted horizontally, and at a differing scale to the animals they are said to be hunting," Pettitt said.

"As for 'spears,' just look at them. They are long lines that just pass close to some humans," Pettitt said. "Hardly weapons held in the hand." He suggested it was also possible different artists added the figures to the wall later, citing European caves that were decorated in several phases.

Brumm said the style and weathering of the artwork was consistent in the animals and people. "We really don't know" what these artists were trying to say, the archaeologist said. To do so for certain would require "photorealistic depiction" in prehistoric art or barring that, he said, time-traveling anthropologists.

There will be plenty of time for debate. More pressing is the preservation of the cave's art. The study authors fear they have only a limited amount of time to observe the paintings.

"The surface of the cave is exfoliating like it's peeling off. And big chunks, every year, are disappearing, and we don't know exactly why," Aubert said.

A list of possible afflictions: climate change that altered the monsoon seasons, speeding up a destructive wet-dry cycle. Or it could be the influence of local pollution. Aubert is trying to raise funds to digitize the cave paintings using laser scanners.

"It could be one of the bitter ironies that we only just discovered the extreme antiquity of this rock art in the last few years," Brumm said, "and it could be gone within our lifetimes."