October is a special month for astronomy lovers, because around this time every year, Earth passed through the tail of debris left behind by three different comets.

Right now, we’re cruising through the tail of Halley's comet, and the result is one of the best sky-watching events of the year - the Orionid meteor shower. This shower lasts until November 7, but don’t wait, because it’s about to hit its peak.

As we reported earlier this month, the shower will hit its peak on the night of October 20 and early morning of October 21, when you’ll get a chance to see up to 20 meteors per hour burning up in Earth's atmosphere all night long.

These meteors are known as Orionids, because they appear to emanate from a region to the north of the second-brightest star in the Orion constellation - Betelgeuse.

They were originally meteoroids, formed from the remnants of the nucleus - or rocky core - of Halley's comet. Since breaking apart from the comet, they’ve remained as a swirling cloud of rubble, shadowing it as it orbits the Sun every 76 years.

As Earth passes through this dirt cloud twice a year, these meteoroids burn up in our atmosphere to become meteors - otherwise known as shooting stars.

The Orionids meteor shower can also produce fireballs, which are meteors that shine extremely bright for a few seconds before fading.

For the best chance of spotting the meteors, you’ve got to think strategically - meaning don’t just step onto your balcony and wonder where all the shooting stars are, find somewhere with low light pollution, lie back on a deck chair, and wait.

Your best bet to spot these beauties is to get out of town where the nights are darker, and give your eyes time to adjust. Check out this light pollution map to help you find a spot.

You’ll also need to find the Orion constellation in the sky so you know where the meteors are going to appear (called the radiant), and the easiest way to do that is to look for Orion’s belt - three stars that are pretty much evenly spaced in a straight line. 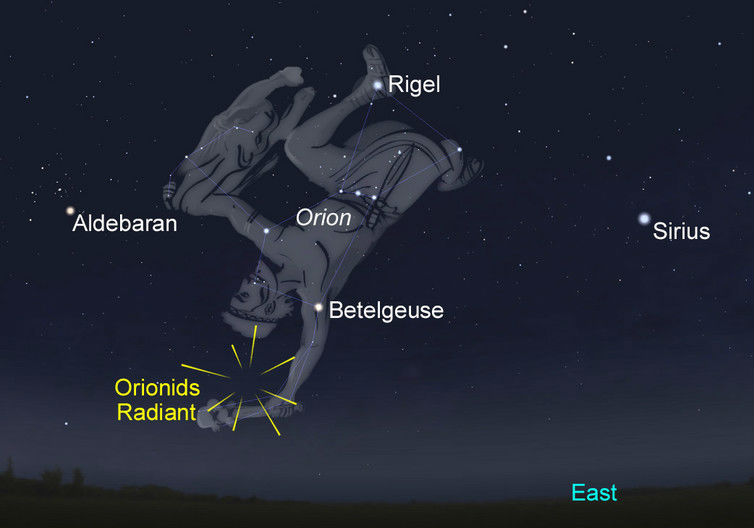 If you’re having trouble finding this, download the Star Walk 2 app ($4.49, iOS; free, Android) to help you find Orion.

Once you find the radiant, don’t look directly at it, but find a dark patch of sky around 30 to 40° away from it to focus on.

Now, while it’s definitely worth making your trip out to watch the stars, there are a couple of things to keep in mind - cloud cover in the US is expected to make viewing more difficult than usual this year, and the waning gibbous moon will be adding a bunch of unwanted glare to the night sky.

But it’s not all bad news, because if you don’t have time to try your luck during the Orionids peak, you might get an even better show if you step outside afterwards.

As Joe Rao explains for Space.com:

"The best plan this year probably would be to observe on the later nights of the display, after October 22, when the radiant (the section of the sky where the meteors seem to originate) will rise before the Moon.

In mid-northern latitudes on October 24, for example, the radiant will be more than one-third of the way up from horizon to zenith (the point directly overhead) when the Moon rises at around 1:25am local daylight time.

Recent studies have shown that about half of all Orionids that are seen leave trails that lasted longer than other meteors of equivalent brightness."

But if you want someone else to do all the hard work, just switch on this livestream by the Slooh Online Observatory, and watch the shooting stars from the comfort of your couch.