Ice changing shape as it melts during one of the experiments. (NYU Applied Mathematics Laboratory)

Melting ice can take on different shapes depending on the temperature of the water around it, new research reveals, giving us new insights into the complex physics that underlie this deceptively complicated transition.

The team behind the research created ultra-pure 'clear' ice for their experiments, free from bubbles and impurities, then observed the ice melting as it was lowered into fresh water tanks in a specially designed 'cold room'.

Time-lapse photography was used to record detailed changes in the shape of the ice, with mathematical models used to confirm the underlying processes that altered the form of the ice as it interacted with the surrounding water.

"The shapes and patterning of ice are sensitive indicators of the environmental conditions at which it melted, allowing us to 'read' the shape to infer factors such as the ambient water temperature," says experimental physicist Leif Ristroph from New York University (NYU).

"We focused on the cold temperatures – 0 to 10 degrees Celsius [32 to 50 degrees Fahrenheit] – at which ice in natural waters typically melts, and we found a surprising variety of shapes that formed."

For temperatures in between, the ice became wavy and rippled as it melted. This matches so-called scallop patterns sometimes found on melting ice in nature. The differences are due to changes in water flow, which is controlled by temperature, which in turn is in flux as the cold ice seeps out into the water.

As the ice melts, the researchers explain, the temperature of the water around it becomes layered, and that means variable liquid densities. As heavier liquid sinks and lighter liquid rises due to gravity, melting happens at different rates at different places on the ice, causing the changes in shape. 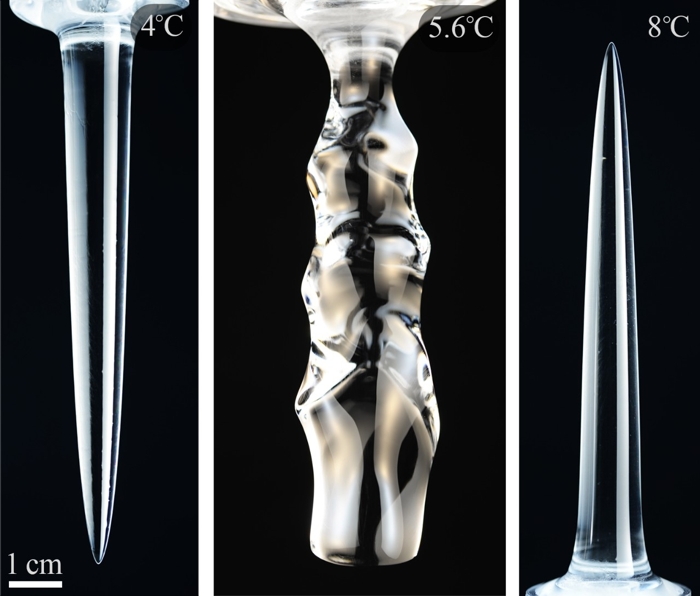 Above: Different shapes of melted ice at different temperatures of ambient water.

"The strange bit of physics is that liquid water has a highly unusual dependence of density on temperature, in particular a maximum of density at about 4 degrees Celsius," says applied mathematician Scott Weady from NYU. "This 'density anomaly' makes water unique in comparison to other fluids."

Technically what we're looking at here is similar to a Kelvin-Helmholtz instability caused by liquids moving at different velocities against each other. It's observed in many other scenarios in the natural world (clouds on Earth and several other planets, for example).

All of this means that scientists have a greater knowledge of how melting creates flow patterns, and how those flow patterns then go on to influence further melting – imagine an iceberg in the middle of the ocean, for example.

It's possible that in the future, we'll be able to understand how ice is melting just by looking at its shape. With Earth's ice reserves disappearing at a steady rate, knowing the influences impacting this process is becoming ever more important.

"Our findings help to explain some characteristic shapes of ice seen in nature, specifically the so-called pinnacle morphology of icebergs that consists of sharp spikes or spires and the so-called scallops that consist of wavy patterns of pits," says Ristroph.

"The bigger context for this work relates to the changing climate of the Earth and the increased rate of ice melting across our planet. It's important to better understand the detailed physics and math of melting at smaller scales, since these are key components of larger-scale climate models."