The Smog in India Is So Bad Right Now, You Can See It From Space

Earlier this week, the Indian government declared a national emergency, as air pollution in its capital, New Delhi, reached levels more than 16 times the safe limit. Schools closed, locals began to flee, and Delhi’s chief minister compared the city to a "gas chamber".

Now, thanks to new satellite images from NASA, we can see just how bad things are at the moment, with the thick layers of smog hanging so heavy over the city, you can actually see it from space.

As you can see in the NASA Worldview satellite image below from November 1, there’s a clear channel of smog running from the city of Faisalabad down to Kota, with New Delhi in the absolute thick of it: 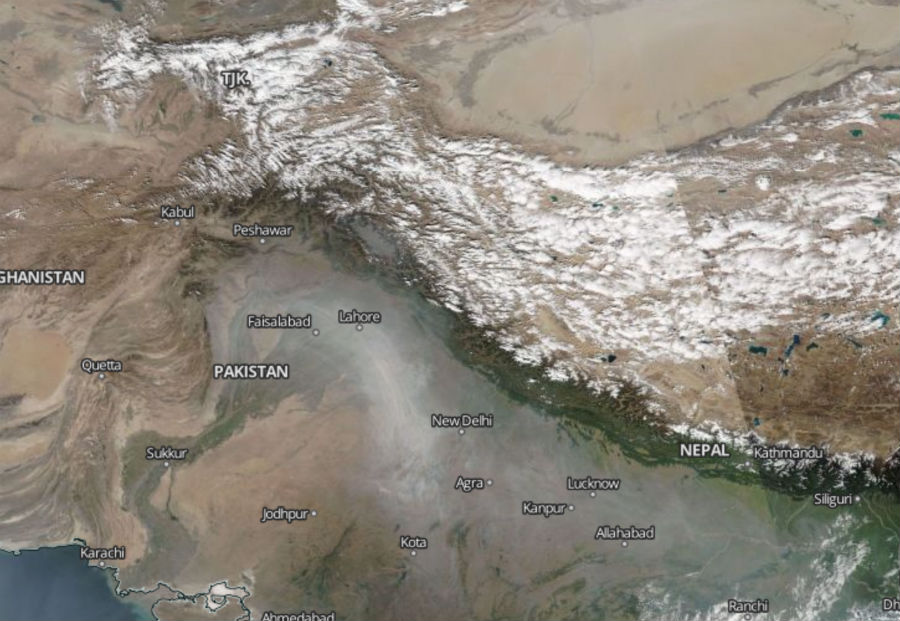 While recent Diwali fireworks in New Delhi have been brought into question as part of the reason for why the city’s pollution levels hit "severe" levels on Monday and over the weekend, officials say the biggest contribution to the pollution levels has been the fires burning in the neighbouring regions of Punjab and Haryana.

Here you can see what NASA describes as "fires and thermal anomalies" in those areas on November 1: 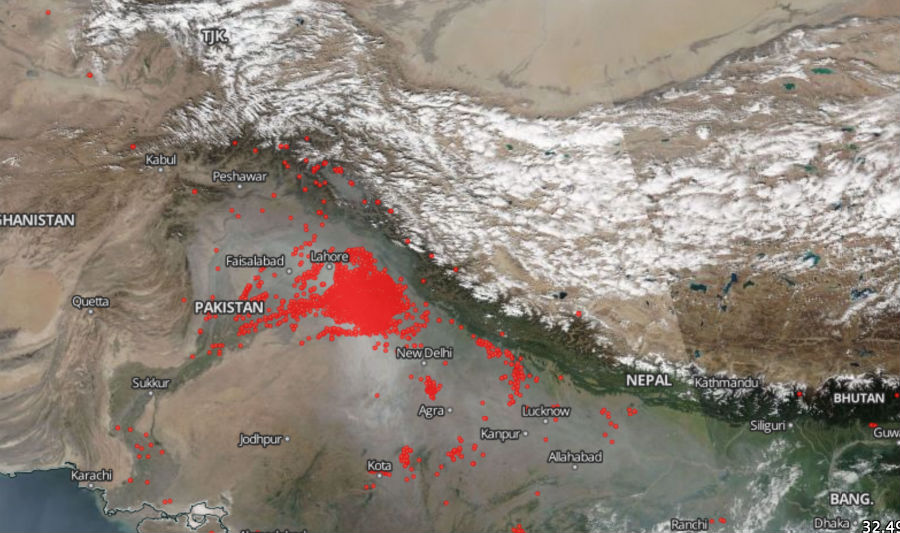 "Farmers are continuing to burn most of the leftover straw - an estimated 32 million tons - to make room to plant their winter wheat crop."

Both types of pollution are measured by the average amount per cubic metre, and according to data from the System of Air Quality and Weather Forecasting and Research (SAFAR), New Delhi today saw PM10 hit 876 μm/m3, and PM2.5 hit 680 μm/m3 earlier this week.

To put that into perspective, the very upper limits for "safe" levels for PM10 and PM2.5 are considered to be 100 μg/m3 and 60 μg/m3 respectively.

To give you an idea of what things have looked like on the ground over the past few days, here's the Tak Mahal:

After the longest travel day I've ever had, it was such an amazing experience to see this spectacular monument in the flesh. Unfortunately these photos don't quite do it justice but I promise it's somewhere in there behind all that fog! #tajmahal #getitindia #guessiforgottoputthefoglightson

And on the street:

Heavy dust and smog make for a difficult journey in New Delhi, India on November 6th 2016. India's capital is struggling with heavy pollution after smoke released from Diwali fireworks still lingers in the air of the metropolis. The smog has forced many local schools to close temporarily and the Delhi government put a ban on construction and demolition works for five days. According to news reports, pollution levels in Delhi rose to 15 times more than the safe limit. Credit: EPA/Harish Tyagi #picoftheday #smog #NewDelhi #India #pollution

Hopefully, as the city moves out of winter, things will ease up slightly for the people of New Delhi, with researchers finding that the low wind and increased home heating of winter typically makes air pollution in the city worse.