A new image of the Flame Nebula shows the interstellar cloud as we've never seen it before.

A team of astronomers using the Atacama Pathfinder Experiment (APEX) telescope has captured the star-forming region in radio wavelengths, revealing details that we had never seen before.

The Flame Nebula, which is close to the famous Horsehead Nebula, forms part of the Orion Molecular Cloud Complex, located in the constellation of Orion, which is one of the most well-studied and imaged regions in the night sky.

"As astronomers like to say, whenever there is a new telescope or instrument around, observe Orion: there will always be something new and interesting to discover!" says astronomer Thomas Stanke of the European Southern Observatory. 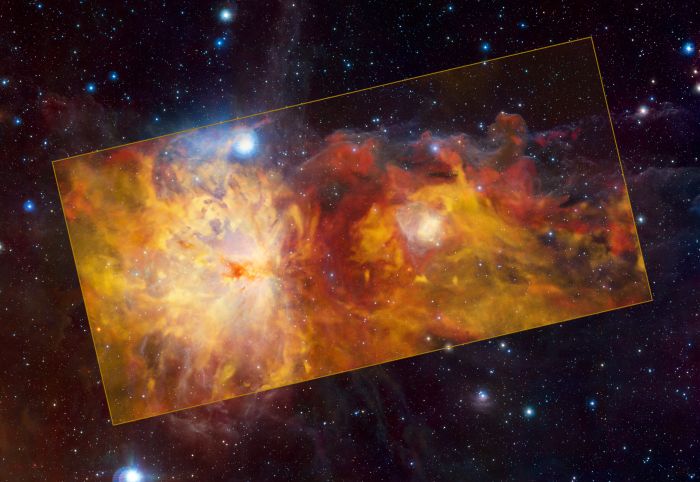 The Orion complex is a vast series of star-forming nebulas that spans hundreds of light-years in all directions, starting at about 1,000 light-years from the Solar System. Because it's so close (cosmically speaking) and so huge, it's an excellent laboratory for studying how stars are born.

The Flame Nebula is one of many stellar nurseries in the complex. It's what is classified as an emission nebula; that is, it emits its own light, as opposed to reflection nebulas, which only shine with reflected starlight, and dark nebulas, which don't shine at all but shadow across the sky like chasms in the cosmos.

What makes an emission nebula shine is the ionization of gases in the nebula by bright radiation from a nearby hot star. Since young stars are often very hot, stellar nurseries tend to shine brightly. The Flame Nebula is home to a cluster of hundreds of newly formed stars, concentrated in its center.

The Flame Nebula in radio wavelengths only. (ESO/Th. Stanke)

But stars are born in clouds of dense dust and gas, which tends to obscure the stars in optical wavelengths. An instrument like APEX, which captures images in radio wavelengths, can capture details our eyes can't see.

In their observations of the Orion complex, Stanke and his colleagues were able to trace molecular outflows, vast winds driven out into interstellar space by star formation processes, and map molecular gas in different nebula regions.

The researchers also found a nebula no one had ever spotted before, almost perfectly circular, suggestive of a spherical cloud containing no stars. They called this object the Cow Nebula globule, and believe it could be used to study cloud structure and dynamics, although more observations will need to be made to better understand its nature and properties.

The team's work has been accepted into Astronomy & Astrophysics and is available on arXiv.

Wallpaper-sized versions of the composite and radio-only images of the Flame Nebula can be found on the ESO website.