You can find them in many places around the world - tall, lean conifers that can't seem to grow straight. And now scientists have figured out that the direction these Cook pines (Araucaria columnaris) lean is always towards the equator, but they're not quite sure why.

Scientists have measured these trees across five continents and, for the first time, documented a species with a leaning pattern that appears to be hemisphere-dependent.

Cook pines originally come from New Caledonia, a tropical archipelago in the southwest Pacific Ocean. The trees were first classified during Captain James Cook's second mission to circumnavigate the globe.

These stately pines are a popular choice for parks and gardens in many parts of the world. They can grow up to 60 metres tall (197 feet), and due to their short branches, they have a characteristic narrow appearance.

But even more characteristic is a propensity for a drunken-looking slant.

"When grown outside of its native range, this species has a pronounced lean so ubiquitous that it is often used as the identifying characteristic for the species," the researchers write in their paper. 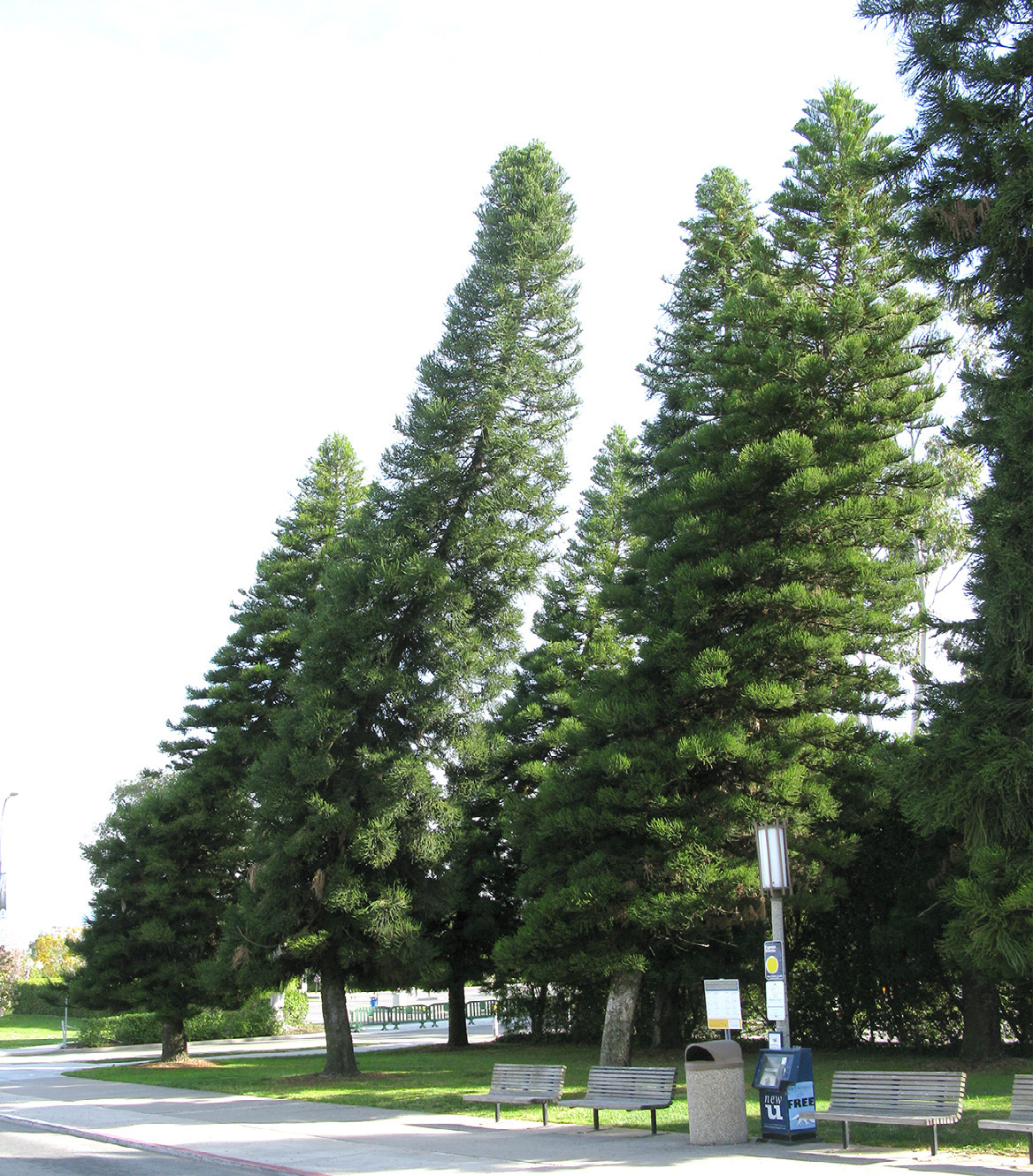 Leaning pines on the campus of the University of California, US. Photo: Johns et al., Ecology (2017)

It started out as an anecdotal observation - one of the researchers, botanist Matt Ritter from California Polytechnic State University, noticed that in California and Hawaii, the pines all seemed to be leaning south.

But A. columnaris are also commonly grown in Australia, where one of them has even become an infamous leaning Christmas tree in the town of Lismore.

And weirdly enough, colleagues told him that the tilt in the southern hemisphere is directed towards the north.

To investigate this, Ritter and his team gathered measurements from 256 trees across 18 regions on five continents, including the species' native range in New Caledonia.

The researchers excluded any trees whose growth could be impacted by another object, such as a building or electricity pole.

They recorded the height of each tree, trunk diameter, as well as the compass direction and extent of the lean, and to their surprise, Cook pines turned out to be more systematic in their leanings than anyone could have expected.

"We uncovered a surprisingly consistent pattern of hemisphere-dependent directional leaning in A. columnaris," the team reports.

On average, the pines tilt by 8.05 degrees, leaning south in the northern hemisphere, and the opposite direction in the southern hemisphere. Less than 9 percent of the trees measured didn't conform to this pattern.

And latitude makes a difference, too - the further away the trees grew from the equator, the greater the slant. So instead of labelling them drunks, it could have something to do with sunlight.

Many plants, including conifers like these pines, are known for their propensity to lean towards a light source when it's not directly above the shoot - a characteristic known as phototropism.

But there's a different plant characteristic that helps trees stay upright - their ability to detect gravity at a molecular level, and therefore direct roots and shoots in the correct directions (towards and away from the ground, respectively).

Even if a baby tree develops a tilt towards the sun, as the plant matures it tends to correct this asymmetry and grow upwards, unless there's an environmental force preventing this, such as really strong prevailing winds in one direction.

But for some reason, A. columnaris just keep on tilting, no matter how tall they grow. And they even appear to be unique in this regard, because other Araucaria species from New Caledonia can stand up straight no matter where in the world you plant them.

It's possible that Cook pines have a genetic quirk that allows them to lean, seeking out more sunlight in latitudes other than their native range. But scientists think that gravity and even Earth's magnetic field could be playing a role, too.

"The mechanisms underlying directional lean of A. columnaris may be related to an adaptive tropic response to the incidence angles of annual sunlight, gravity, magnetism, or any combination of these," they write.

Of course, the researchers are hoping to investigate further. They think that further studies of the species could even lead to discovery of little-known mechanisms that plants use to respond to environmental cues.

The study was published in Ecology.