The Strangest Creature Just Got Unearthed From a Siberian Diamond Mine

Siberian miners have reportedly dug up what an ancient, unidentified mammal from the diamond-yielding sands of Udachny, in the Mirninsky district of the Sakha Republic in far northeastern Russia.

And okay, it might look like some kind of mummified demon spawn, but there's a perfectly reasonably explanation for all of this… it's just that no one's quite sure what that is yet.

According to The Siberian Times, while the miners would very much like this to be some kind of newly discovered dinosaur species, researchers have suggested that it could be a young wolverine - a small, bearlike creature with very strong jaws and large canine teeth, as seen in the photo below.

Other options are that the creature is either a sable or a pine marten, which are small, ferret-like species from the weasel family.

Judging by its very slender body and large, bone-crushing skull, (both of which could have been stretched and distorted in death and mummification), it's likely the animal belongs to the Mustelidae family of carnivorous mammals, which includes otters, badgers, weasels, martens, ferrets, minks and wolverines, although we won't know for sure until the specimen gets a proper analysis.

As the Siberian Times reports, it's expected that the creature will be taken from Udachny to the regional capital of Yakutsk for tests. 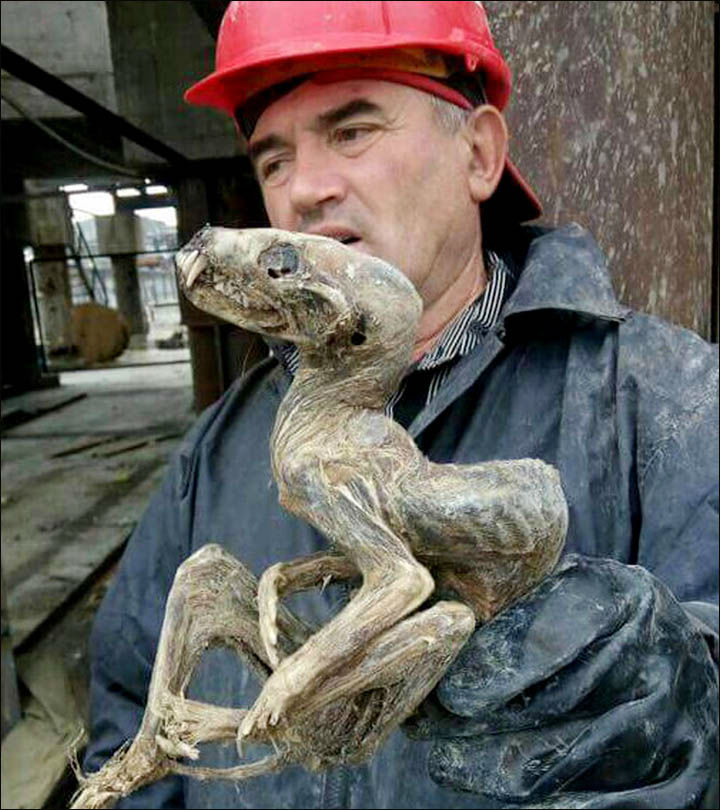 The appearance of our new demon baby isn't the only fascinating thing about this story - the place it was found in is entirely unique, boasting diamondiferous (or diamond-yielding) sands that have been dated to the Mesozoic Era, which spanned from about 252 to 66 million years ago.

Also known as the 'Middle Life' era, this is time when life on Earth diversified rapidly, with giant reptiles, dinosaurs, mammals, and new plant species spreading out across the planet.

The Mesozoic Era is divided up into the Triassic, Jurassic, and Cretaceous periods, and is bookended by two mass-extinction events.

It's unlikely the creature is as old as the sands it was found in, but given the incredible preserving qualities of the Russian permafrost, it could be pretty damn ancient, with researchers finding a remarkably preserved, 12,400-year-old puppy in another part of the Sakha Republic just last year.

This thing was so well-mummified, it still had its fur and parts of its brain.

We'll have to wait and see exactly what the deal is with this latest specimen, and it's important that we don't jump to any conclusions until the find has been independently verified - right now, we're just going on what we know from the news reports.

But one thing's for sure - perfectly normal creatures can look incredibly strange when they've lost their fur. Anyone remember the chupacabra incident of 2010?