Something strange has happened in the voice boxes (or larynxes) of primates: these organs have evolved much faster than in other types of mammals, based on a comprehensive new study of 55 different species.

The research – the first of its type into the evolution of the larynx – also shows that primate voice boxes are larger in relation to body size and greater in variation compared with larynxes in other types of animal.

That has scientists intrigued – and it's an indication that primates have more flexibility when it comes to the ways they can evolve and adapt. It's also more evidence of a long-held hypothesis that the larynx is a key indicator of evolution.

"This study demonstrates clear differences in the evolution of the larynx between groups of mammals," says behavioural ecologist Jacob Dunn from Anglia Ruskin University (ARU) in the UK.

"Specifically, we have shown for the first time that the primate larynx is larger, less closely linked to body size, and under faster rates of evolution than the carnivoran larynx, which is a well-matched comparison group, indicating fundamental differences in the evolution of the vocal organ across species."

The voice box fulfils the same function across the animal kingdom: protecting the airway during feeding, managing the air supply to the lungs, and controlling vocals. The role in oral communication is what makes it particularly important to the evolution of a species.

Through 3D scans and computer models, researchers were able to show that primate voice boxes are, on average, 38 percent larger than those of carnivorans of comparable size, and that other species have a more fixed larynx-to-body size ratio.

A wide variety of primates were analysed too: from a pygmy marmoset (Cebuella pygmaea) weighing 110 grams (4 ounces) to a Western gorilla (Gorilla gorilla) tipping the scales at 120 kilograms (265 pounds). 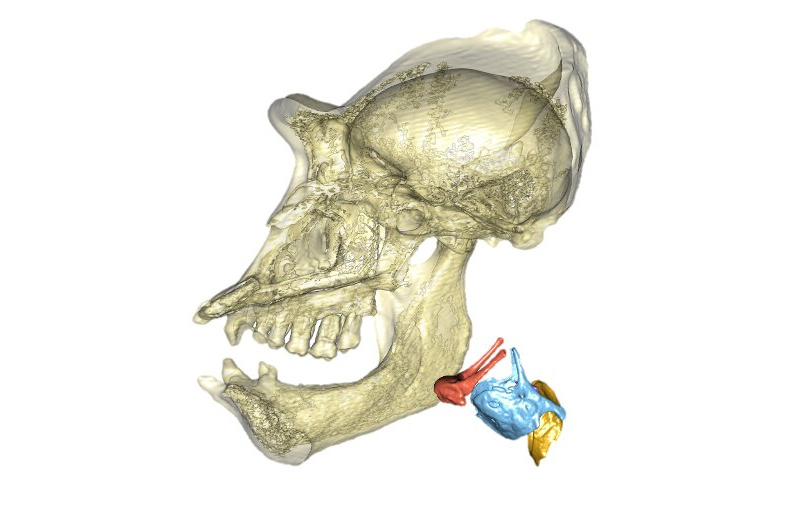 Indeed, many primate species have vocal calls that are richer and more varied than other species – and the researchers suggest that a greater "evolutionary flexibility" in primates has allowed their larynxes to evolve in this way.

Primates and carnivorans (such as bears and tigers) make for an interesting comparison, in this study and others. Both groups form similar sorts of social structures, live in a similar variety of habitats, and have a similar range of body sizes.

The next step is to discover why primate voice boxes have evolved so quickly and in such a varied way, with feeding behaviours, oxygen regulation, and the need to communicate in different habitats among the ideas under consideration – they could all have played a role in these 55 species and others.

"This provides an exciting avenue for future studies examining variation among other mammalian groups," says Bowling.

The research has been published in PLOS Biology.