A 125-Year Weather Record Just Broke in The US, But The Floods Will Keep Coming

Flooding swamped parts of the Southeast over the weekend, with as much as a foot of rain falling in western North Carolina. At the same time, the Mississippi River continued its long-lasting assault on communities along its banks. Near St. Louis, the crest over the weekend was the second-highest on record.

Just the latest high-water news, during what has seemed like a never-ending parade of storms.

During May, a stormy pattern, headlined by widespread flooding in the nation's heartland and a two-week swarm of tornadoes, boosted the nationally averaged precipitation to the second-highest level on record for the month.

The 4.41 inches (11 cm) recorded was 1.5 inches above normal, trailing only May 2015′s 4.44 inches, according to the National Oceanic and Atmospheric Administration.

The substantial May total helped pushed the most recent 12-month output for the Lower 48 states to the highest level in 125 years of record-keeping (since 1895): 37.68 inches (96 cm). It easily topped the previous record 12-month total of 36.20 inches set just last month.

10 to 12 inches of rain fell in parts of North Carolina over the weekend. (National Weather Service)

Over the weekend in North Carolina and parts of the adjacent region, early-season extreme heat and a rapidly developing drought was replaced by intense rainfall. The signals for flooding were seen days in advance, yet the ferocity of the rainfall was still hard to fathom.

A large area saw totals as high as 10 to 12 inches, with a few spots exceeding that. Peak totals of 13.64 inches near Brookford and 13.57 inches east of Boone were reported by AccuWeather.

Extreme rainfall over a short period led to many waterways overflowing their banks, washing out roads and entering homes or businesses. The worst was focused in the mountains and foothills.

Jennifer Kyle Arthur shared this photo of Mitchell Mill Rd in Rolesville. Turn around when you see a flooded road! There may not even be a road left under some of the floodwaters! pic.twitter.com/drAcGFOn6n

Five hundred miles to the northwest, a slower-motion flood reached its latest apex in and around the St. Louis area over the weekend.

In what has become the longest cycle of Mississippi River flooding since 1927, Saturday's crest of 46.02 feet at St. Louis was the second-highest on record for that location, behind only the 49.58 foot mark set during the Great Flood of 1993.

The Weather Service office in St. Louis notes that this is the sixth major crest of the Mississippi at St. Louis since 2013, all top-10 marks at a location where records date to the 1700s.

Although the Mississippi has been subject to more and more flood-control measures, various levee and dam failures and over-toppings have caused water to inundate a number of towns and cities in recent months.

Alton, Ill., to the north of St. Louis, was the latest victim when a flood wall failed last week.

The Mississippi River at St. Louis crested @ 46.02 ft. Second highest crest in history, falling roughly 3.5 ft short of the record crest of 1993. Second major flood crest this year & 6th time since 2013. Of the 12 major crests, half have occurred in the past six years. #stlwx pic.twitter.com/M4SWCX2VQX

A year of floods

Following a wet 2018, the floods of 2019 burst onto the scene in the central United States in mid-March, when snowmelt and heavy rain inundated parts of Nebraska and Iowa.

Since then, flash flooding and river flooding have engulfed large portions of the Plains and Midwest as well as the Corn Belt.

But the deluges have fanned out from this region at times, including to Houston last week, and now the Southeast.

Until the rains arrived this weekend, parts of the Southeast were facing the sudden onset of drought thanks to a persistent dome of sinking air that produced both extreme heat and excessively dry conditions in late May. 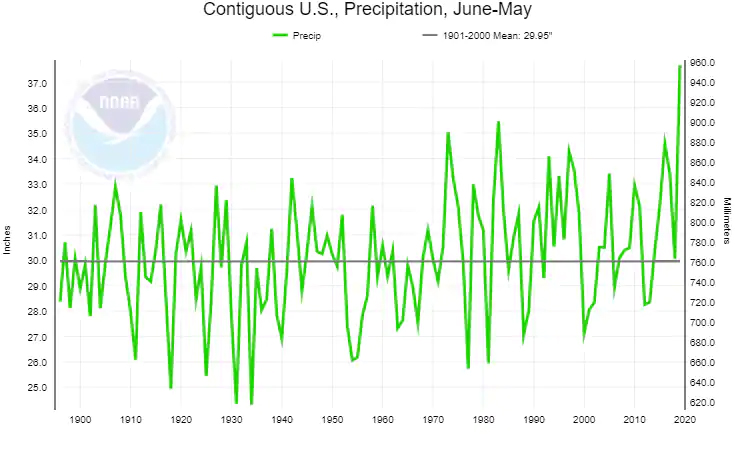 12-month precipitation totals for the Lower 48. June 2018 through May 2019 demolished the prior tallies. (NOAA)

Aside from that, the Lower 48 has mostly seen record-low drought coverage this spring, tied to the record 12-month rainfall. The 37.68 inches averaged over the country since last June is a whopping 7.73 inches above average.

The magnitude of the rainfall is probably related to the presence of El Niño, the episodic warming of waters over the tropical Pacific Ocean which tends to increase storminess in the southern United States.

Yet this last 12-month rainfall average bests prior records coming out of the strong El Niño winters (1972-73 and 1982-83) by more than two inches.

While it is likely that the weak El Niño is intensifying rainfall over the Lower 48, increases in heavy rain events are also among the most anticipated and well-documented impacts from climate change.

May was characterized by warm extremes in the Southeast and simultaneously cold extremes in the north-central region. Such a contrasting pattern, which may become more common in a warming world, breeds storminess.

In the short term, there's some good news for the flood-weary. A less active pattern is expected for the next week or so in the central United States. After that, a stormy pattern may try to resume by the latter part of June.