The World's Most Powerful Atom-Smasher Just Turned Back On, to Push Physics Even Further

The world's most powerful atom-smasher is at it again. After spending the winter in hibernation, the Large Hadron Collider (LHC), a 17-mile-long (27-kilometre-long) particle collider near Geneva, Switzerland, is once again slamming together protons to investigate the fundamental building blocks of matter.

This time around, the LHC is kicking atoms and taking names as it hunts for answers to some of the most pressing questions in physics.

Physicists will explore how we ended up with a universe of matter after the Big Bang, as well as what makes up dark matter, a hypothetical substance that physicists think makes up more than a quarter of the Universe (compared to regular matter, which makes up less than 5 percent).

The LHC made headlines in 2012 when physicists at two of its four detectors announced that they had detected the Higgs boson, a staple in the Standard Model of physics, which describes the basic building blocks of matter and the forces that govern them. The discovery of the Higgs helps explain how matter gets its mass.

The massive machine will continue colliding particles to allow physicists to further investigate the Higgs. Physicists will also investigate hints of a new particle that surfaced in the data from 2015.

The hints, which take the form of mysterious bump in the data, could just be a coincidence, or they could be signs of a new particle – possibly a heavier cousin of the Higgs boson. If this unexpected particle exists, it could signify new physics beyond the Standard Model. 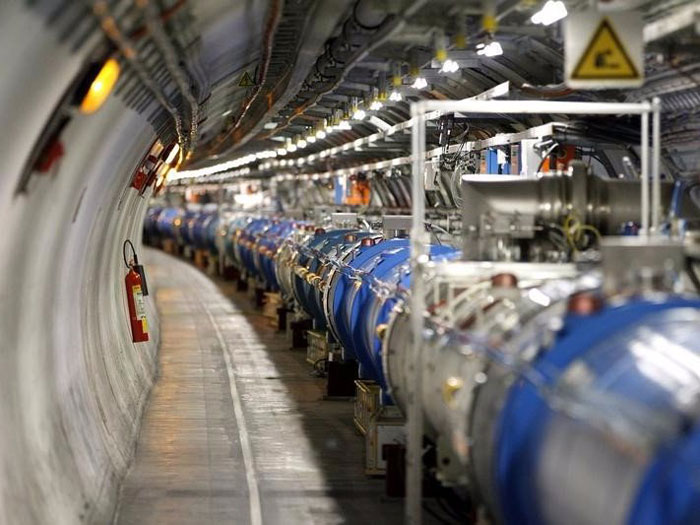 A general view of the Large Hadron Collider (LHC) experiment is seen during a media visit at the Organisation for Nuclear Research (CERN) in the French village of Saint-Genis-Pouilly near Geneva in Switzerland. Credit: Thomson Reuters

The LHC's 2016 season will last for six months, orchestrating roughly 2 quadrillion high-quality proton collisions, or about a billion per second. That's six times greater than 2015's collisions, and just short of the number recorded during the collider's first run, which lasted six times as long.

The LHC is operating at nearly twice the energy as its first run. This jump in energy should allow physicists to push the boundaries of physics even further, exploring a new realm of physics that, until now, was out of reach. It will hugely increase the prospects of finding new massive particles.

"So far the Standard Model seems to explain matter, but we know there has to be something beyond the Standard Model," Denise Caldwell, director of the Physics Division of the National Science Foundation, said in a press release. "This potential new physics can only be uncovered with more data that will come with the next LHC run."