It's estimated that there are fewer than 100 Sumatran rhinos now left in the wild and no one had even seen one alive in its natural habitat more than four decades. But last week in Borneo, Indonesia, conservationists finally managed to capture a female Sumatran rhino, which means she can now be protected from poachers, and potentially bred.

"That's a very, very rare thing," Simon Stuart, a rhino expert from the International Union for the Conservation of Nature, told Adam Vaughan at The Guardian. "Finding a single Sumatran rhino is good news given we can't even account for 100 in the world."

While Indonesia's similarly elusive Javan rhino - possibly the rarest large mammal on Earth, with an estimated population of just 61 individuals - has just one horn, the Sumatran rhino is the only species of Asian rhinoceros to have two. A coat of reddish-brown hair covers most of the Sumatran rhino's body, giving it its nickname, the hairy rhinoceros.

Their numbers have been dwindling fast over the past few decades, thanks to habitat loss and poaching, with the remaining 100 or so individuals suspected to be hiding out in the forests of Kalimantan in Borneo, and the island of Sumatra. Researchers suspect they've split into three separate populations, one of which has seen a critical decline in distribution range of 70 percent over the last decade.

In August 2015, the species was declared extinct in the wild in Malaysia, and there are currently nine individuals in zoos around the world. 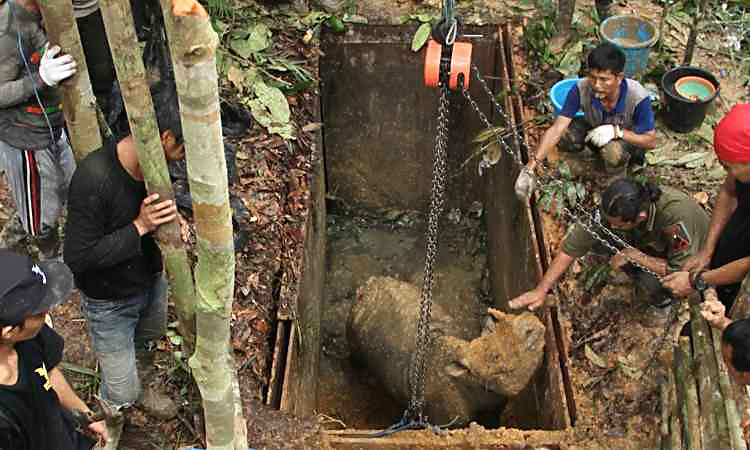 While researchers have caught signs of the species via camera traps, footprints, and dung, until last week, that was all they had to go on since the last human contact with the species back in the 1970s. By safely capturing a female in a pit trap, conservation efforts can really be ramped up.

"This is an exciting discovery and a major conservation success," Pak Efransjah, CEO of WWF-Indonesia, said in a press statement. "We now have proof that a species once thought extinct in Kalimantan still roams the forests, and we will now strengthen our efforts to protect this extraordinary species."

The female is estimated to be between four and five years old, and will now be re-homed in a sanctuary around 160 km (100 miles) from where she was found. Stuart told The Guardian that because poachers have used announcements like this in the past to target Sumatran rhinos, the location of this one's new home (and point of capture) is being kept "really, really vague".

The next step is to increase efforts to find more live Sumatran rhinos in the area. By looking at images taken recently by camera traps, researchers have identified a further 15 individuals, and they now have to figure out how to find them, and if they can start breeding them. "The female of the species need to breed regularly or can develop tumours that render them infertile," The Guardian reports.

Time will tell if the Sumatran rhino can actually be saved, because researchers aren't even sure at this stage if there are enough to set up a viable breeding program to bring them back from the brink. But this amazing find, this single beautiful female, is the best chance we've had in almost half a century, and that's cause enough for a bit of hope.