For the first time in a century, the global wild tiger population has increased, giving hope to conservation efforts after many decades of seeing numbers dwindling.

According to figures provided by the World Wildlife Fund (WWF), there are now a minimum of 3,890 tigers in the wild, representing a substantial increase since 2010, when estimates put the global population at as few as 3,200.

"For the first time after decades of constant decline, tiger numbers are on the rise," said director general of WWF International, Marco Lambertini. "This offers us great hope and shows that we can save species and their habitats when governments, local communities, and conservationists work together."

The WWF attributes the higher tally – which has been compiled from a number of national tiger surveys – to a range of factors, including enhanced protections of the animals and improved surveying techniques. The overall increase is primarily due to larger tiger populations in India, Russia, Nepal, and Bhutan. 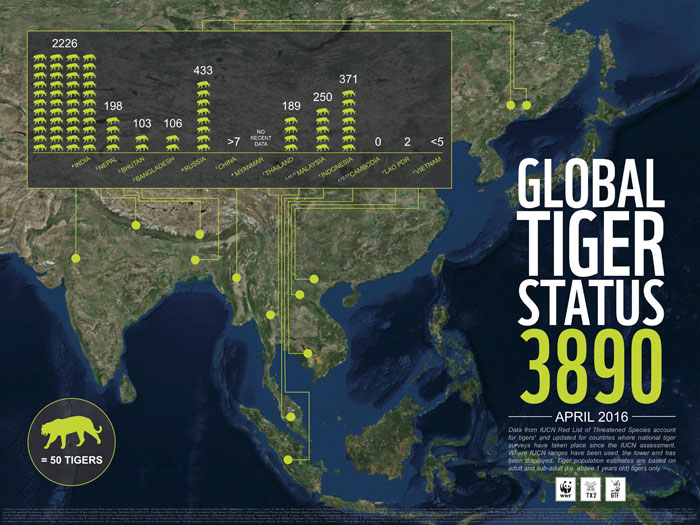 By far, the majority of the animals are in India, followed by Russia, Indonesia, and Malaysia. Nepal, Thailand, Bangladesh, and Bhutan all play host to smaller numbers, as do China, Myanmar, Lao, and Vietnam.

The above nations are all members of the Global Tiger Forum (GTF), which in 2010 saw world leaders joining an international effort called the Tiger Initiative Tx2 to double wild tiger numbers by 2022.

While the boost in tiger populations since 2010 means we're headed in the right direction, those involved say it still won't be easy to double the numbers in such a short space of time.

"A strong action plan for the next six years is vital," said leader of the Tx2 initiative, Michael Baltzer. "The global decline has been halted but there is still no safe place for tigers. Southeast Asia, in particular, is at imminent risk of losing its tigers if these governments do not take action immediately."

One of the most immediate challenges is keeping a close eye on the tiger count in all countries that are part of the GTF, to help assess the population counts in the face of threats like poaching and deforestation. While all member nations are obliged to conduct systematic national surveys, not all countries have complied, making it harder for the WWF and GTF to ensure their global estimate is accurate.

Meanwhile, threats to tiger conservation are still very real. The WWF says between 2000 and 2014, some 1,590 tigers were seized by authorities from the illegal wildlife trade. Obviously, if each nation tracks exactly how many wild tigers are living within their borders, it makes it easier to shut down the poachers.

But even though many countries' adherence to the GTF's internal processes still needs a little work, the rebound in tiger numbers since 2010 is a great moment, and hopefully one that can provide impetus to conservation efforts at large.

There's a long way to go – in 1900, it's thought the global wild tiger population was as high as 100,000 animals – but at least we know numbers can be increased when we work together.

"This is a pivotal step in the recovery of one of the world's most endangered and iconic species," said WWF senior vice president of wildlife conservation, Ginette Hemley. "Together with governments, local communities, philanthropists, and other NGOs, we've begun to reverse the trend in the century-long decline of tigers. But much more work and investment is needed if we are to reach our goal of doubling wild tiger numbers by 2022."

In the meantime, short of donating to conservation efforts like the WWF, one of the best ways to fight poaching efforts in places like Southeast Asia is to make sure you don't inadvertently support the illegal wildlife trade if you travel there.

"While loss of habitat has been a major reason for the decline in tiger numbers, the illegal poaching of tiger and the use of tiger products in traditional medicines is also a major factor behind the decline in tiger populations," WWF Australia's national manager Darren Grover told Alle McMahon at the ABC.

"We really urge people who are going to these countries, if you're in markets and you are seeing what are claimed to be tiger products, don't purchase them. As we like to say, there's only one place where those tiger products should be, and that's in a tiger."