A new survey of the sky in X-rays has revealed a previously hidden structure in the Milky Way galaxy. Giant bubbles of X-radiation from the galactic centre have been found extending vast distances above and below the galactic plane.

They're so huge, they engulf the already known Fermi bubbles of gamma radiation - but, according to a team of astrophysicists led by Peter Predehl of the Max Planck Institute for Extraterrestrial Physics in Germany, it's likely that the two phenomena are somehow linked.

That's how astronomers interpret the Fermi bubbles. Discovered by the Fermi gamma-ray telescope in 2010, these structures are filled with hot gas and magnetic fields that emit gamma radiation, expanding from the galactic centre. They extend for nine kiloparsecs (29,354 light-years) in each direction, for a total size of 18 kiloparsecs.

These bubbles are thought to be evidence of past activity from the region, although we still don't know what that activity might be.

Options include starburst activity, with a tremendous number of stars being born, or an outburst for the currently quiescent supermassive black hole in the galactic centre, back when it was a little more active.

This new discovery could provide context that helps scientists interpret the mystery of the Fermi bubbles. 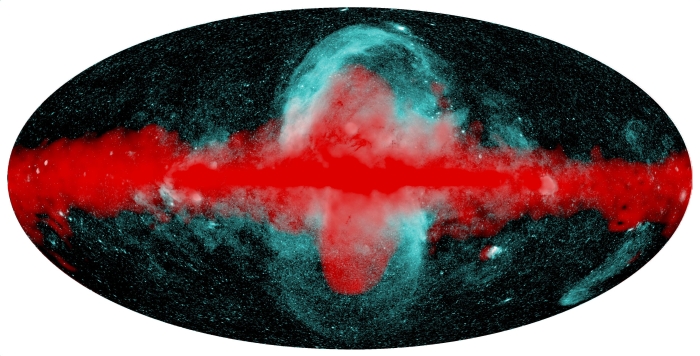 The results come from eROSITA, an X-ray telescope aboard the Spektr-RG space observatory. Launched in July 2019, its mission is to take the deepest all-sky survey in X-ray wavelengths. And, with its incredible sensitivity, it has imaged structures no other instrument has been able to make out clearly.

These structures are huge, extending 14 kiloparsecs (45,661 light-years) in either direction from the galactic centre. At that size, they engulf the Fermi bubbles entirely. But - although we still don't know what the exact cause of the bubbles is - Predehl and his team believe they were produced by the same event.

Of particular interest in the observations were structures imaged by eROSITA's predecessor, ROSAT. Although the lower resolution and sensitivity of ROSAT meant these structures were only partially visible, connections had already been made to the Fermi bubbles. Those connections only became clearer with the eROSITA data.

"The Fermi bubbles and large-scale X-ray emission revealed by eROSITA show remarkable morphological similarity," the researchers wrote in their paper.

"We therefore suggest that the Fermi bubbles and the eROSITA structure are physically related, and refer to the latter as 'eROSITA bubbles'. Our discovery confirms the previously suggested common origin of the two objects." 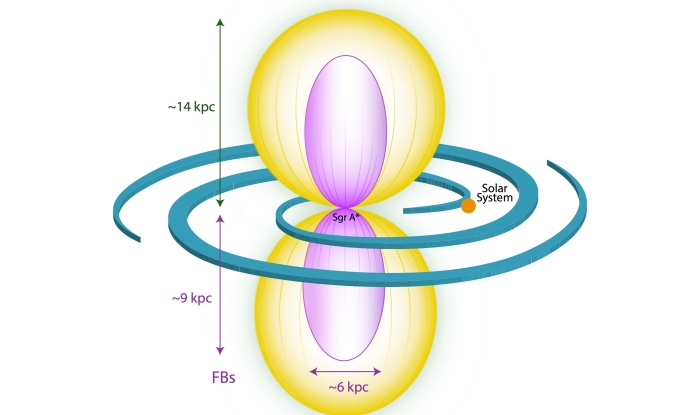 Secondly, the eROSITA bubbles are much bigger, comparable in size to the galactic disc, the researchers said.

They also observe two prominent structures in the eROSITA bubbles. There's the outer boundary of the eROSITA bubbles, bright in X-ray, indicating that the gas at the boundary is hotter than the gas around it. That's consistent with a shock front propagating through the galactic halo, associated with a forward shock linked to the onset of the energetic event that caused the bubbles.

On the other hand, they're comfortably within the energy range of an active galactic nucleus - a galactic supermassive black hole that is actively accreting material, producing powerful feedback outflows in the form of jets and winds. And supernova activity associated with star formation could also produce enough energy.

Either way, the new discovery gives us some interesting new information. For example, galaxies are thought to grow by recondensation of cooling plasma that became heated during the collapse of the dark matter halo. The eROSITA bubbles are direct evidence that that plasma can be re-heated.

We also have new context for the North Polar Spur, a hot, X-ray bright bubble in the northern sky. This object has been hard to figure out, since it's really hard to tell how far away it is.

Some astronomers have associated it with supernovae and stellar births at a relatively short distance. Others thought it might be much farther away, associated with outflows from the galactic centre. The team's results suggest that it may be associated with the eROSITA bubbles.

Taking a longer, closer look at the gigantic structures - not just in X-rays, but with other instruments as well - can help us find answers to these outstanding questions. And, as scientific observations are wont to do, hopefully lead us to even deeper ones.