More than a century on from its fateful voyage, experts are still discovering more about what happened on board the RMS Titanic – and there's new evidence that a fire below deck could've played a big part in its sinking.

To be clear, the iceberg still struck the fatal blow, but new photos have come to light that show signs of damage to the hull, possibly caused by a fire below deck.

Irish journalist and author Senan Molony, who has been studying the disaster for 30 years, says the weakened sections of the hull made it impossible for the Titanic to withstand the iceberg impact.

His new hypothesis is being put forward in a documentary screened on Channel 4 in the UK, called Titanic: The New Evidence.

"The official Titanic inquiry branded [the sinking] as an act of God," Molony told Lucy Bannerman at The Times.

"This isn't a simple story of colliding with an iceberg and sinking. It's a perfect storm of extraordinary factors coming together: fire, ice, and criminal negligence."

We should emphasise that officials have always known that there was a fire on board the Titanic – a fire that was smouldering in coal bunker number 6 after the ship left Belfast in Northern Ireland bound for Southampton on the south coast of England.

However, the influence of the fire was played down in the original inquiry into the disaster.

What's new is the photos showing dark spots on the hull – recently found as part of a private auction – and Molony's suggestion that this damage was a crucial part of the sinking.

The dark marks Molony has spotted in several photographs were close to bunker 6 and to the spots where the iceberg stuck its hardest blows against the hull.

In his documentary, Molony claims the fire heated the hull bulkheads up to 1,000 degrees Celsius (1,832 degrees Fahrenheit), which meant they stood no chance against an onrushing block of ice.

"We have metallurgy experts telling us that when you get that level of temperature against steel it makes it brittle, and reduces its strength by up to 75 percent," Molony told The Times. 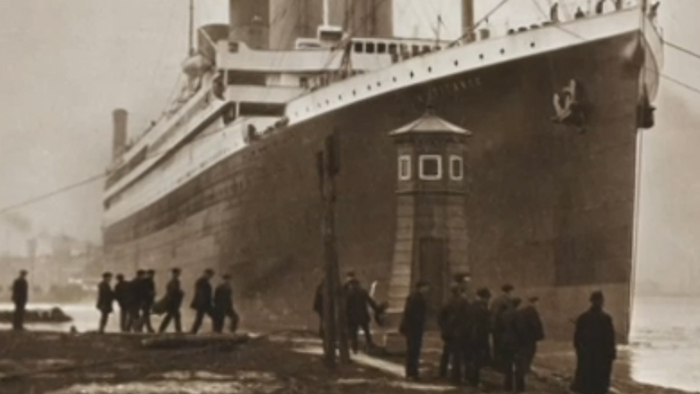 New photos show dark marks on the hull, seen here near the centre of the image, just to the right of a group of people. Credit: Titanic: The New Evidence

There's another twist in the fire hypothesis, which was originally suggested by mechanical and aerospace engineer Robert Essenhigh of Ohio State University back in 2004.

We've always known the Titanic was going faster than it should've been when it struck the iceberg, but no one has ever been sure why. Essenhigh says this may have been a result of sailors' efforts to put out the fire.

As the crew shovelled coal from the bunker to the steam engine boiler – to try to dispose of the source of the fire – the ship would have sped up, according to Essenhigh.

In 2008, the idea that the fire was partly to blame was again raised: this time, author and researcher Ray Boston suggested the fire started during speed trials before the ship left Southampton, but the flames still hadn't been put out before its maiden voyage.

With the new photographic evidence and testimony from sailors at the time, Molony makes a compelling case, but not everyone agrees with his conclusions.

"There certainly was a fire," former secretary of the British Titanic Society David Hill told The Times. "It set sail on Wednesday and they didn’t get it out until the Saturday so it must have been a big one."

"Was it a life-changer? It's my personal opinion that it didn’t make a difference. It just shows that even after all these years this old ship keeps throwing up new things that have us scrambling around. It's absolutely fascinating."