There's Something Different About Clouds in Antarctica, And It Could Be Important

Clouds that form in the frosty air above Antarctica are different in the way that water and ice interact inside them, a new study reveals – and that in turn changes how much sunlight they reflect back into space, which is important for climate change models.

Through a combination of modeling, satellite imagery and data collected from flying through the clouds themselves, researchers have identified a process of 'secondary' ice production. This means icy particles collide with supercooled water droplets, freezing and then shattering them, creating many more shards of ice.

The technical term for this sequence of events is Hallett-Mossop rime splintering. It dims the clouds, reducing the amount of sunlight that's reflected back into space, and allowing more of it through into the ocean below. 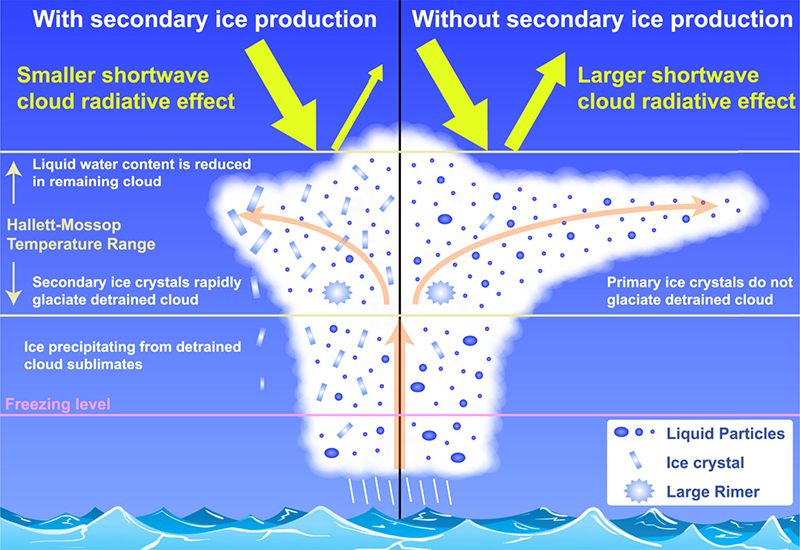 "The Southern Ocean is a massive global heat sink, but its ability to take heat from the atmosphere depends on the temperature structure of the upper ocean, which relates to the cloud cover," says atmospheric scientist Rachel Atlas, from the University of Washington.

Based on the researchers' calculations, in clouds at temperatures between -3°C and -8°C (26.6°F and 17.6°F), around 10 Watts per square meter of extra energy could reach the ocean from the Sun, enough to significantly change temperatures.

Ice formation inside these clouds is very efficient, and the resulting ice can fall down into the ocean very quickly, too. That rapidly reduces the amount of water in the clouds, and shifts several of their key characteristics from a reflectance point of view.

What's happening inside the clouds also affects their shape, creating further consequences for how well they protect the water underneath.

All these factors need to be weighed up in order to produce climate models that are as accurate as possible.

"Ice crystals also deplete some of the liquid in the thick cores of the cloud. So the ice particles both reduce the cloud cover and dim the remaining cloud."

February is the peak of summer in Antarctica, and at that time of year, around 90 percent of the skies are covered in cloud. A quarter of those clouds are of the type covered by this study – mixed-phase clouds – so the potential effects shouldn't be underestimated.

At the moment only a few global climate models take into account Hallett-Mossop rime splintering, something the researchers behind this new study would like to see changed, so that we can gain a more detailed understanding of how Earth's climate is shifting across its various ecosystems.

It's an issue that's been raised several times before: climate models don't adequately account for all the different types of clouds swirling around the globe, all the different processes happening inside them, and how temperatures might be affected.

"Ice formation in Southern Ocean low clouds has a substantial effect on the cloud properties and needs to be accounted for in global models."