Last month, an international team of researchers started scanning Egypt's pyramids using the latest technology, in the hopes of finding out more about the country's three famous structures, which are located in Giza just outside of Cairo.

And they’ve already found something interesting – mysterious heat spots across the pyramids, including one particularly large patch inside the Great Pyramid of Giza, also known as the Khufu pyramid.

Because different materials – such as air and rock – hold heat differently, these ‘thermal anomalies’ could be a sign of voids below the surface, potentially indicating cracks or cavities in the rock, or, excitingly, even secret passages or tombs.

While thermal scanning revealed that there are many of these temperature changes across the pyramids, the team found "a particularly impressive one (anomaly) located on the Eastern side of the Khufu pyramid at ground level," said Antiquities Minister Mamdouh El-Damaty.

“There is something like a small passage in the ground that you can see, leading up to the pyramid's ground, reaching an area with a different temperature,” said El-Damety. “What will be behind it?" 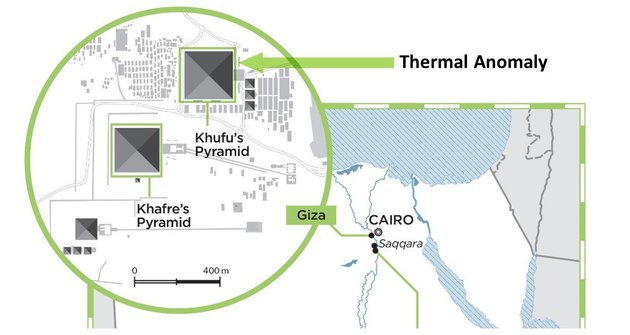 The scanning was done throughout the day, which means that the researchers were able to monitor temperature changes as the pyramids heated up and then cooled down during sunrise and sunset.

So even though each block that makes up the pyramids is slightly different in temperature, by monitoring the speed of this heating and cooling, the researchers were able to isolate several persistent anomalies.

While the difference in temperature between most adjacent limestone blocks was between 0.1 to 0.5 degrees Celsius, the anomaly in the Great Pyramid was an impressive 6 degrees warmer than the surrounding bricks, as you can see in these thermal scans: 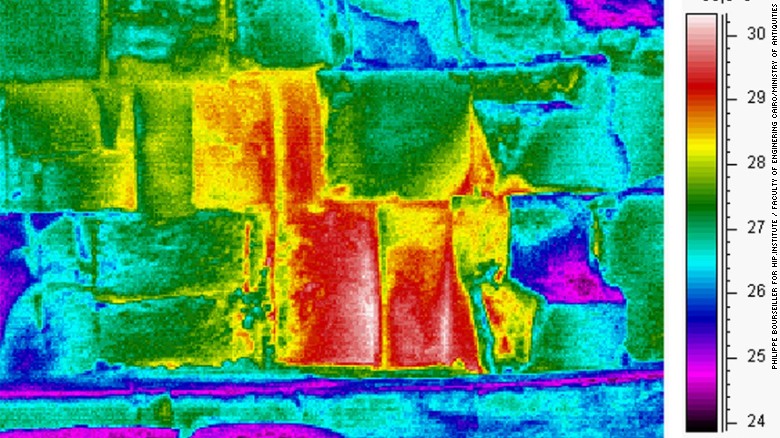 So far there are plenty of hypotheses as to what this might indicate – with the leading assumptions being empty areas, internal air currents, or different building materials – but no conclusions just yet.

The good news is that the study, which is called operation ScanPyramids, will continue until the end of 2016, and thermal scanning is just the first step.

Next the researchers intend to use infrared to survey the three pyramids, which were built between 2613 and 2494 BCE, and they also plan to use cosmic particles called radiographic muons and 3D reconstruction to try to map the secrets within the pyramids.

Egyptologists are hoping that their results will shed some more light on the structures and the people who built them around 4,500 years ago.

"At the very least, this anomaly will shed additional light on the construction techniques of the 4th dynasty Egyptians,” Egyptologist Beth Ann Judas told the Huffington Post. "It's rather exciting actually. Over the past few years, archaeologists have been learning more about the workmen and officials who are connected to the pyramids, and this gives us more information about their work."

Just don’t expect to find any signs of grain storage.