Scientists have found what they think are the oldest proteins ever recovered, having discovered ancient ostrich eggs dated to around 3.8 million years ago.

That's an astonishing amount of time to be preserved, and because these ancient proteins stem from animal DNA, they could provide genetic information almost 50 times older than any existing DNA records.

The discovery, led by researchers from the University of York in the UK, shows that proteins can survive much longer if they're bound to solid surfaces - like ancient eggshells - and that could change everything for palaeontologists searching for hints about ancient life.

"We had known for many years that proteins could give more clues into the past," said one of the team, archaeologist Matthew Collins. "But when we looked at protein decay in eggshells, it gave us unusual results when compared to other fossil materials and, until now, we have not really known why."

Working with researchers from around the world, the team developed a computer model to investigate why some protein remnants seem to survive better than others.

According to the model, the fluid components in proteins are what give the material its longevity – provided it can bind with a solid surface, that is.

"They were able to bind more strongly to the eggshell, allowing it be preserved in time," said one of the team, Beatrice Demarchi.

The binding stabilises the proteins and lets scientists extract them whole, rather than in fragments – an important distinction if we want to learn about the health, biology, and behaviour of the earliest life forms on the planet.

The oldest DNA ever found has been dated to 700,000 years old, and has been dug out of frozen bones from Canada and other cold climates in recent years.

But this new research shows that we can now wind the clock back much further – albeit with proteins rather than source DNA, which is thought to have a maximum shelf life of about 1.5 million years.

Although it's only a hypothesis for now, the researchers suspect that the same protein-binding process could also have occurred on other ancient fossils too – including human fossils.

If that's true, new investigations of those fossils – using the techniques the researchers have pioneered here – could give us clues about the evolution and migration patterns of our distant ancestors. 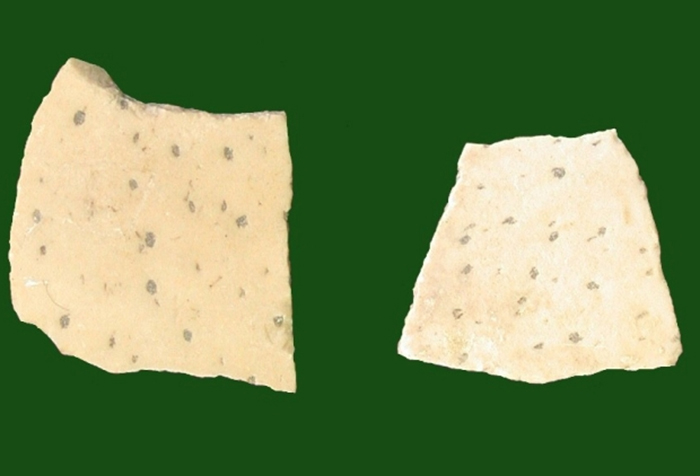 One of the ancient eggshells. Credit: Terry Harrison/New York University

What's also significant is that the eggshells were uncovered in Tanzania, which suggests that hotter regions of the world could provide more fertile ground to palaeontology than researchers have assumed.

While a lot of early traces of human evolution are thought to have been left on the African continent, the region's hot temperatures naturally speed up their decay. But now that we know more about how proteins can cling to fossils, it's possible more discoveries could be made in the future.

And there are plenty more ostrich eggshells to test. The shells are often found at archaeological sites, and were used by our ancient ancestors to carry water and make jewellery.

If scientists are able to tease out new biological information from these ancient proteins, there will be lots of material for researchers to work with – and not just from ostrich eggshells. Even dinosaur eggshells could eventually be of interest, say the researchers.

"Now that we know minerals can trap and preserve proteins in this way, we can be much more targeted in our study of ancient remains," said one of the team, Colin Freeman, from the University of Sheffield in the UK.

The findings have been published in eLife.