SpaceX is scouting for prime real estate to populate Mars, according to a database of NASA spacecraft photography.

The database entries suggest the rocket company, founded by the tech mogul Elon Musk, is looking for relatively flat, warm, and hazard-free places to set down its coming launch vehicle, called Starship.

A scientist at the University of Arizona later confirmed the existence of SpaceX's landing site-scouting project.

SpaceX is developing Starship – a towering two-stage rocket ship – to land 150 tons and up to 100 people at a time on Mars, with the first missions starting in the mid-2020s.

Each candidate landing site is a place where frozen water may be buried under just a bit of red dirt and thus accessible to robots and people. That ice could, in theory, be mined, melted, and turned into precious supplies such as water, air, and rocket fuel.

The space-history writer Robert Zimmerman first posted about the images on his site, Beyond the Black, after perusing a fresh batch of data from NASA's Mars Reconnaissance Orbiter. Zimmerman noticed several photos with titles that included the words "Candidate Landing Site for SpaceX Starship".

"To put it mildly, it is most intriguing to discover that SpaceX is beginning to research a place where it can land Starship on Mars," Zimmerman wrote, adding that each site was a probable location to find buried ice.

SpaceX did not immediately respond to a request for comment from Business Insider. However, the images are authentic requests from the company made through a scientist at NASA's Jet Propulsion Laboratory.

SpaceX is considering at least 9 landing sites for Starships

The new pictures came from HiRISE, a telescope operated by the University of Arizona that's mounted on the MRO spacecraft. The telescope's camera can photograph surface features at a resolution as fine as 1 foot per pixel – three times the resolution that Google Maps provides of Earth and on par with spy satellites.

HiRISE, however, can only take so many sizable images per orbit and beam them tens of millions of miles back to Earth. So scientists must file image requests for locations of interest to them months in advance. 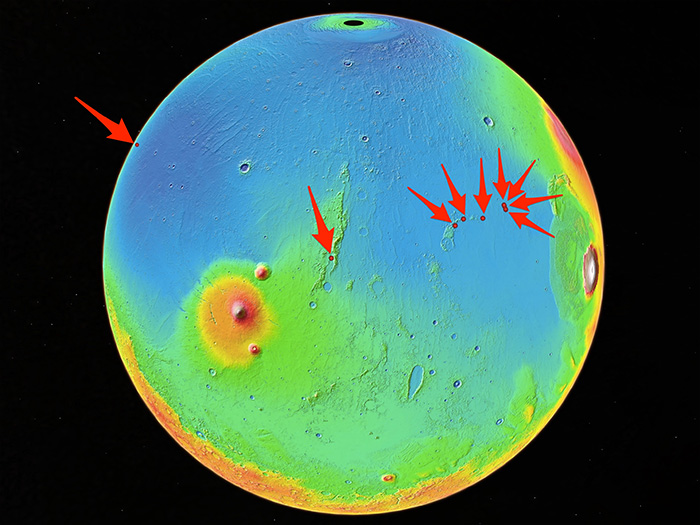 Above: An elevation map of Mars showing the nine candidate landing sites SpaceX is considering for its first Martian voyages of Starship.

Though Zimmerman highlighted four Starship landing sites in the HiRISE catalogue, Business Insider found image requests for nine SpaceX-related locations. We plotted them (above) by inputting the data into Google Earth.

All of the Starship image requests were filed by Nathan R. Williams, a planetary geologist at NASA JPL.

Williams has previously requested dozens of images in support of NASA's coming Mars 2020 rover mission, which will attempt a landing in Jezero crater. He has also asked for dozens of photos to support SpaceX's now-defunct Red Dragon mission to Mars.

"He was bound by a nondisclosure agreement with SpaceX and could not comment," Zimmerman said after contacting Williams about the Starship image requests. (Neither Williams nor NASA JPL immediately responded to Business Insider's request for comment.)

The HiRISE site shows that, on April 29, Williams requested 18 different images of Mars related to Starship. Specifically, he asked for two images each per site – each from a slightly different angle – to build stereo anaglyphs pairs. Such pairs can reveal finer 3D details about a location, including its terrain and landing hazards.

Of the nine locations Williams asked HiRISE to observe, six have published images, two are not yet published, and one has yet to be imaged.

Alfred McEwen, a planetary geologist and director of the Planetary Image Research Laboratory, confirmed the project after the publication of this story.

"Under direction from JPL, the HiRISE team has been imaging candidate landing sites for SpaceX," McEwen told Business Insider in an email. "This effort began in 2017, initially for the Red Dragon lander, and is continuing for their Starship vehicle."

The landing sites are all relatively flat, warm, boulder-free and presumably icy

Musk has said in recent years that he wants SpaceX to help build a self-sustaining city on Mars by the mid-2050s – partly as a way of "backing up" humanity like a hard drive.

To do that without going bankrupt, though, he needs a lot of Starships and an ability to refuel them on the Red Planet.

The company hopes to make Starship fully reusable – the first such rocket of its kind – to lower launch costs by a factor of 100 or even more than 1,000. Refuelling on Mars is key to making Musk's scheme work, which is why SpaceX chose methane as its fuel of choice.

By using solar (or perhaps nuclear) energy, Musk says, a process called the Sabatier reaction could turn water and carbon dioxide in the thin Martian atmosphere into methane. That fuel, along with oxygen extracted from the water, could be used to refuel Starships for return flights to Earth as well as provide breathable air and drinking water.

McEwen said the candidate landing sites "are concentrated at low elevations in the northern middle latitudes, in places where there is evidence for shallow ground ice."

That strip of Mars is thought to hide massive, rapidly buried glaciers that remain mostly preserved after millions of years.

Some evidence for this is in the shape of nearby craters, which appear to sink after a meteorite impact because they expose ice to Martian air, which is about 1 percent as thick as Earth's.

Functionally that is a vacuum, causing the now-exposed ice to sublimate away into the air in the same way a block of dry ice does when it warms up. 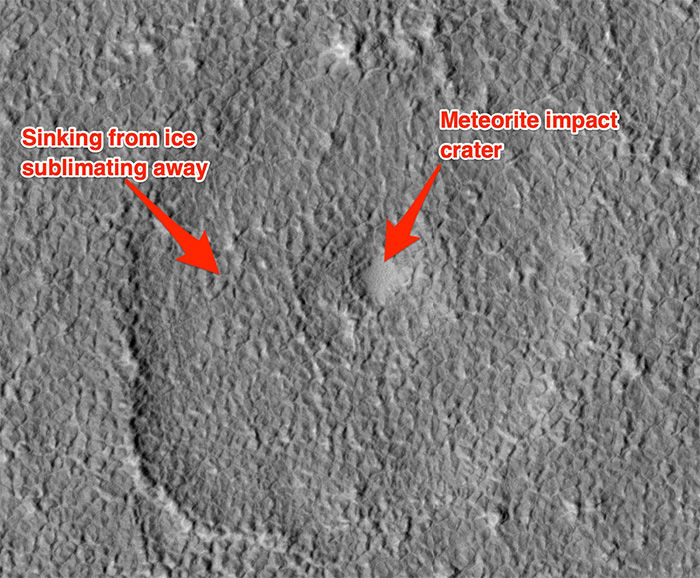 Above: One line of evidence for ice on Mars are impact sites. Ice exposed to the thin martian air sublimates into a gas and collapses soil around the original crater.

SpaceX's presumed candidate sites are also flat and relatively free of boulders, which are objects that you definitely do not want your spacecraft to land on or crash into.

The sites are also distant from Mars' super-frigid polar caps, are a bit warmer, see quite a bit of sun (important for gathering solar energy), and are relatively low-laying. Because air sinks and gets denser at lower elevations, this might help Sabatier machines more efficiently suck in carbon dioxide and manufacture methane fuel for Starships.

SpaceX is just beginning to test Starship, though

At this stage, SpaceX has not completed a Starship capable of reaching orbit, let alone landing on Mars. The company has also not explained how it plans to mine ice, build permanent habitats that recycle resources, or even keep people alive during the journey to and from Mars.

But SpaceX has a solid start: It has built and thoroughly tested new methane-burning Raptor engines. SpaceX also strapped one such engine to an early prototype, called Starhopper, and soared it more than 490 feet, or 150 meters, into the air above South Texas on July 25.

Workers are now building two bigger, orbit-capable prototypes: Starship Mark 1 in Boca Chica, Texas, and Starship Mark 2 in Cocoa, Florida. Musk tweeted on Friday that the company would attempt to launch them about 12.4 miles into the air in October and then around Earth "shortly thereafter."

If all goes according to the CEO's "aspirational" timeline, the rocket company could be launching passengers around the moon and missions to Mars in the mid-2020s.

Musk also plans to update the world on SpaceX's latest design for Starship and plans for the launch system on September 28. It's possible he may also say more about where and why, exactly, the company plans to land its first interplanetary Starship missions.