The dragonfish is a top predator at the bottom of the sea. A bioluminescent lure on its head and spots on its belly beckon prey, like a lantern draws in moths.

The rest of its body, as long as a pencil and almost as slender, is an inky black that blends in with water deeper than the sun can reach.

The predator's glow is the deep-sea embodiment of a light at the end of a tunnel. But wayward little fish won't find anything pearly here. Just long, pointy — and nearly invisible — fangs.

And those teeth are remarkable, as a new study published Wednesday in the journal Matter reveals. 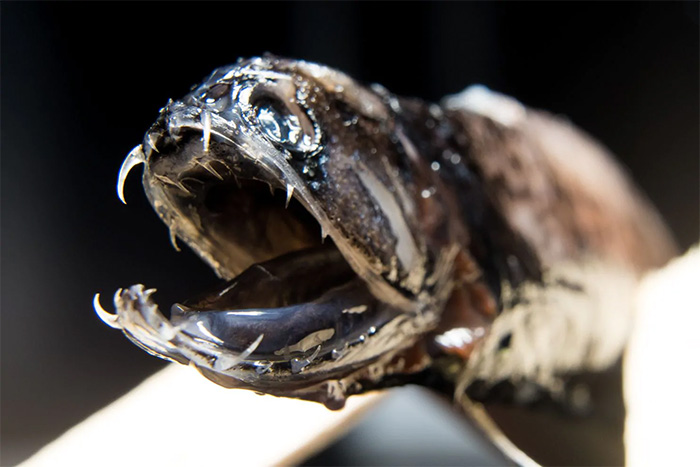 The teeth contain the same minerals as the chompers that gleam in sharks' mouths and toothpaste ads. Except, as arranged in the dragonfish teeth, there's no shine: The structures are translucent.

Marc Meyers, a materials scientist at the University of California at San Diego, encountered dragonfish when he accompanied an oceanographic expedition to the San Diego Trough, an underwater canyon off the coast of its namesake city.

The ship's nets collected animals from 1,500 feet (nearly 500 meters) below, and when Meyers saw the dragonfish, he became entranced by their "transparent little teeth", he said.

He transported several dragonfish heads to the Leibniz Institute for New Materials in Germany. There his colleagues examined the teeth with an electron microscope and other laboratory tools.

To his knowledge, no one had studied teeth like these before.

"We didn't know what these teeth would be made out of," he said, "but, lo and behold, it is hydroxyapatite."

That's the same tough substance, a calcium mineral, that builds our bones and our tooth enamel.

What may be unique to the dragonfish are the structures within their teeth, which are extremely small arrangements of hydroxyapatite and collagen, a protein in many connective tissues.

That nanostructure transmits most wavelengths of light instead of scattering it, Meyers said. The property, known as Rayleigh scattering, can be seen in the interplay between sunlight and atmospheric particles, which scatter blue light, giving the sky its color.

"If the teeth were nice and white," Meyers said, "the light would be reflected."

Christopher Kenaley, a biologist at Boston College and an expert in deep-sea fish who was not involved with this study, said the bulk of the new report was a valuable contribution.

"We don't know much about the materials of animals that live in the deep sea," he said.

Teeth translucency makes a certain kind of sense. "You don't want teeth to be an indicator that you're about to eat something," Kenaley said.

Yet other species of dragonfish, which munch on small and unobservant crustaceans, also have translucent teeth, which may suggest this adaptation has another unknown purpose, he said.

(But Kenaley also said he spotted a flaw in the report: The authors identified their specimens as the dragonfish Aristostomias scintillans. The images show a different type of dragonfish, belonging to the genus Stomias, Kenaley said.)

Meyers and his colleagues tested the mechanical strength of the teeth. They were about as hard as a shark's tooth and as sharp as a piranha's.

Kenaley said he had firsthand confirmation that a dragonfish's pointy ends mean business.

"Jeez," he said, "I was stabbed by one the other day working in the lab."

Meyers said he plans to explore the materials inspired by dragonfish teeth in the future. He imagined a ceramic that is transparent like glass but much more resistant to cracking.

"Nature has a limited number of materials," he said, but it remixes them into "ingenious solutions."