Somewhere by the banks of what is now the river Aveyron in the south of France, tens of thousands of years ago, families gathered by the light of a roaring fire to watch tiny creatures dance amid the shadow and flame.

Or so we might imagine. A fresh look at more than 50 stone plaquettes from a paleolithic dig site in the 19th century has recently invited speculations over their use: Perhaps it was art that flickered to life when viewed by firelight.

Archaeologists from the University of York and Durham University in the UK analyzed the samples of engraved river stone and limestone to get a better look at their etched patterns and signs of heating, to figure out exactly what purpose they might have served.

Based on the complex nature of the drawings and signs of discoloration caused by elevated temperatures, researchers suggest they may have been intentionally placed right up next to hot flames, possibly to produce some kind of animated effect.

"It has previously been assumed that the heat damage visible on some plaquettes was likely to have been caused by accident, but experiments with replica plaquettes showed the damage was more consistent with being purposefully positioned close to a fire," says lead author Andy Needham from the University of York.

Humans have been intentionally painting and scratching lines of one kind or another onto surfaces for tens of thousands, if not hundreds of thousands of years.

Considering the artistic creatures we are today, it's surprisingly hard to say with certainty what prompted us to render our world in picture-form in the first place. Was it to communicate? To entertain? Or was it for a more sublime, more spiritual purpose?

Countless small, flat stones found across Europe more than 10,000 years ago pose an even bigger riddle. The context of some of the decorated blocks implies practical uses, such as flooring, lamps, or as stones for surrounding hearths.

But others, such as the abstract shapes, human figures, animals, and geologic motifs found on a number of stones unearthed at a dig site near the French town of Montastruc, have no obvious use.

Of the 76 animal engravings the researchers noted on the 54 plaquettes borrowed from the British Museum, 40 depicted horses, seven showed reindeer, and six were of red deer. Others included a bird, a wolf, and even a human-like figure. Most were shown in a naturalistic position, paying attention to precision in anatomy. 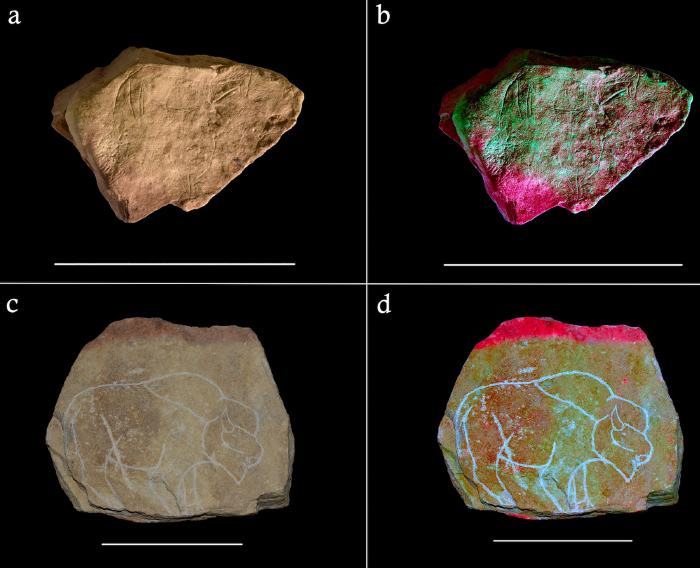 Above: Stones etched with a horse (top) and bison, showing signs of exposure to fire (right).

Lines and flaws in many of the stones were incorporated into the scene itself – one horse, for example, has a leg seemingly styled around a crack in the rock. Yet most intriguing of all are the animals that are strangely stacked, overlapping in a confusing fashion.

Given examples of broken plaquettes from other sites that had been refreshed and re-engraved, it initially seems odd to superimpose animals over one another, melding bodies and sharing limbs.

Until, that is, the scenes are viewed not as authentic representations of still life, but as something far more dynamic, to be appreciated in the presence of moving flames instead of the harsh light of day.

The suggestion isn't without precedence. Paleolithic researcher and filmmaker Marc Azéma made this very suggestion ten years ago, based on similarly-cluttered scenes of animals on cave walls.

To test their proposal, the researchers made 3D models of the stones and used virtual reality software to view the images as they could have been seen tens of thousands of years ago – nestled close to the fire's edge.

Illuminated by the wavering glow of a campfire, features of the stone surfaces blurred, emphasizing their natural lines and artistic scratches in ways that made the image seem less static.

Though far from life-like, movements like these would have still sparked a sense of awe and connection in our minds.

"Creating art by firelight would have been a very visceral experience, activating different parts of the human brain," says Needham.

"We know that flickering shadows and light enhance our evolutionary capacity to see forms and faces in inanimate objects and this might help explain why it's common to see plaquette designs that have used or integrated natural features in the rock to draw animals or artistic forms."

Whether our ancestors knowingly embraced a form of art we can only describe as cinematic, or decorated their hearth-stones with dynamic imagery purely by chance, is impossible to say one way or another.

Given our propensity for expressing ourselves through every manner of media and technology today, it's not hard to imagine artists of long ago finding ways to bring their scratches to life amid the chaos of an evening fire.