Stars are born as dense clouds of interstellar material collapse under their own gravity, spinning into flat discs that eventually spool into baby stars. Now, for the first time, hints of planet formation have been detected around a protostar so young, the cloud of leftover dust and gas is still collapsing into it, and the disc still forming.

This is the earliest detection of such structures in a protostellar ring, and it suggests that planet formation starts earlier than we thought, before the nascent system is even 500,000 years old.

The young protostar is called IRS 63, and it's 470 light-years away in the Rho Ophiuchi star formation region - a stellar nursery where the dust is thick enough to form the spinning clumps that will eventually form stars.

IRS 63 is in class I of the star formation process, less than half a million years old. It's past the main accretion phase, and has most of its final mass; shining brightly in millimetre wavelengths, it's also one of the brightest protostars of its class.

Additionally, IRS 63 has a large disc, extending out to around 50 astronomical units. These properties, along with its proximity, make the object an excellent target for studying star and planet formation. 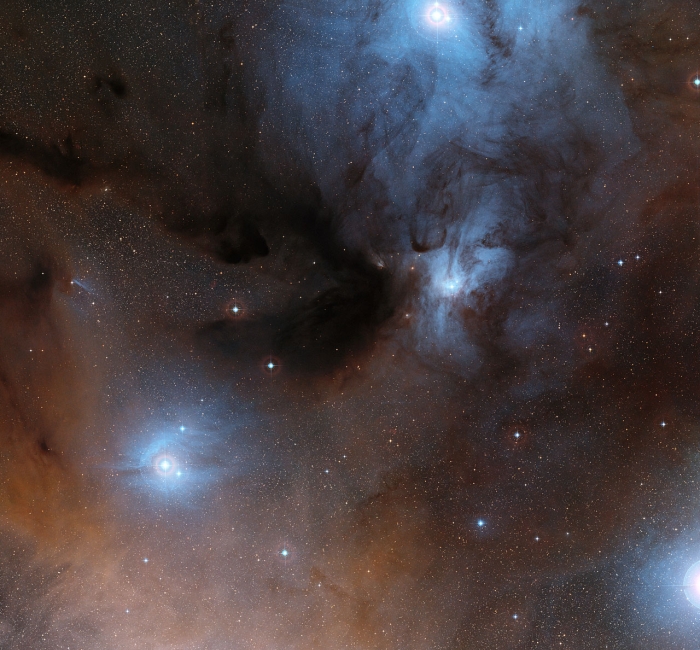 Using the Atacama Large Millimeter/submillimeter Array in Chile - a radio telescope with an excellent track record of detecting early planet formation - a team led by astronomer Dominique Segura-Cox of the Max Planck Institute for Extraterrestrial Physics in Germany took a closer look at the star and the dusty cloud around it.

There, in the swirling disc, the team found a surprise: two dark concentric gaps centred around the protostar - what astronomers take to be a sign of planet formation.

Planet formation is a poorly understood process. The most popular model is core accretion - grains of dust in the disc gradually accumulating, first sticking together electrostatically, then gravitationally as the body grows larger and larger. As this occurs, the protoplanet hoovers up all the material along its orbital path, creating a gap in the circumstellar disc.

Such gaps have been detected in almost all discs we've imaged with sufficiently high resolution. But there is a big problem with the model - it takes a very long time for planets to form that way, and protostellar discs older than about 1 million years old don't seem to have enough material to form the known exoplanet population.

Astronomers have found over 35 class II protostellar systems around the age of 1 million years that have lost their large dust clouds, but still have protostellar discs and sport pronounced gaps therein. The fact they have such well-developed gaps at just 1 million years old, suggests planet formation process is well underway by the time stars are of this age.

If the structures detected by Segura-Cox and her team are created by planets, it would support this idea, and offer a solution to the problem of missing mass in the protostellar disc.

"Recent dust mass measurements of class II discs also indicate that observed dust depletion could be explained if substantial mass is locked into planetesimals on timescales less than 0.1 to 1 million years," the researchers wrote in their paper.

In comparison to the gaps in these class II discs, the gaps in the disc around IRS 63 have lower contrast, suggesting they contain more material. Therefore, the putative protoplanets in said gaps are at an earlier stage of development.

These masses are the upper limits, but even the lower estimates would be already substantially large bodies - Earth is 0.003 times the mass of Jupiter. This is unexpected, since there are significant barriers in our planetary models to such rapid accretion.

An alternative explanation, the researchers note, is that the planets haven't started forming yet. Instead, the gaps could be created by a phenomenon known as radial drift: Gas in the disc creates drag, which causes dust and rock particles to lose angular momentum, and start to drift towards the star. This is actually considered a barrier to planet formation, since the planet has to form faster than radial drift.

But the density of the gas isn't necessarily even, and a local maximum in the radial surface density of the gas can form a 'trap' for dust. So it's possible the gaps are created by inward-migrating dust, and the denser rings in the disc are these gas-pressure maxima traps.

Under this interpretation, these thick, dusty rings could achieve higher dust-to-gas ratios, resulting in zones of accelerated accretion - so they're like protoprotoplanets.

Either way, what the team has observed in the disc around IRS 63 is likely to be the result of planet formation - placing the beginnings of the process on a much earlier timeline than we've ever seen before.

"Even in the most conservative case [..] these features are indications of dust beginning to accumulate at particular radii in the disc. It is probable that the structure of the disc has an effect on planet evolution starting early in the star-formation process," the researchers wrote in their paper.

"Class I protostars remain embedded in a larger-scale envelope of gas and dust, which can replenish the disc as material is accreted, indicating that if planet formation in the disc of IRS 63 has already begun, then it is probable that planets and protostars grow and evolve together from early times."