Reports Are Emerging of 'COVID Nails'. Here's What You Need to Know

A white spot is NOT a sign of COVID. (Evgeniya Krasnova/Getty Images)

The main signs of COVID-19 are fever, a cough, fatigue and a loss of your sense of taste and smell. Signs of COVID-19 in the skin have been noted too. But there's another part of the body where the virus appears to have an impact: the fingernails.

Following a COVID-19 infection, for a small number of patients the fingernails appear discolored or misshapen a number of weeks later – a phenomenon that's been dubbed "COVID nails".

One symptom is a red half-moon pattern that forms a convex band over the white area at the base of fingernails. This seems to present earlier than other COVID-related nail complaints, with patients noticing it less than two weeks after being diagnosed. Multiple cases have been reported – but not many. 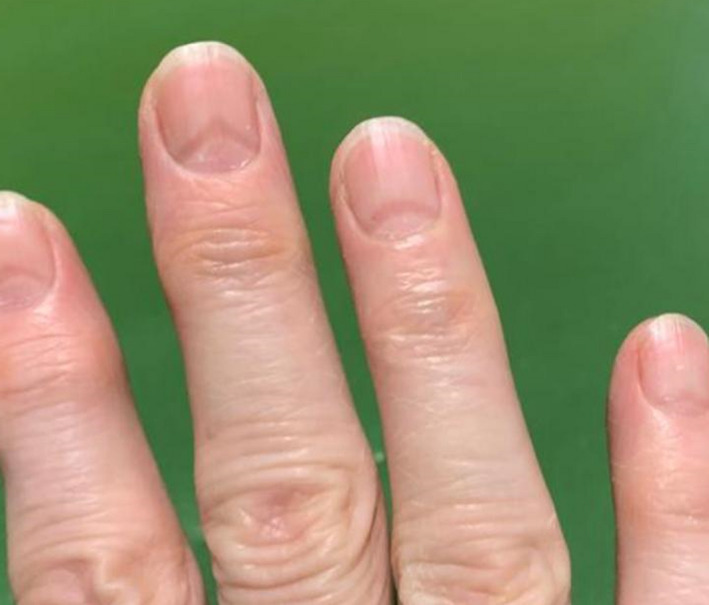 Red half-moon nail patterns like this are generally rare, and previously haven't been seen so close to the nail base. So having this pattern appear like this could exclusively be an indication of a COVID-19 infection.

The mechanism underlying this half-moon patterning remains unclear. A possible cause could be blood vessel damage associated with the virus itself. Alternatively, it may be due to the immune response mounted against the virus causing mini blood clots and discoloration.

Importantly, these marks don't appear to be anything to worry about, as patients are otherwise asymptomatic – although it is unclear how long they stay for, having lasted from between one week to over four weeks in the cases reported.

A few patients have also found new horizontal indentations in the bases of the nails of their fingers and toes, which are known as Beau's lines. These tend to appear four weeks or more after a COVID-19 infection. 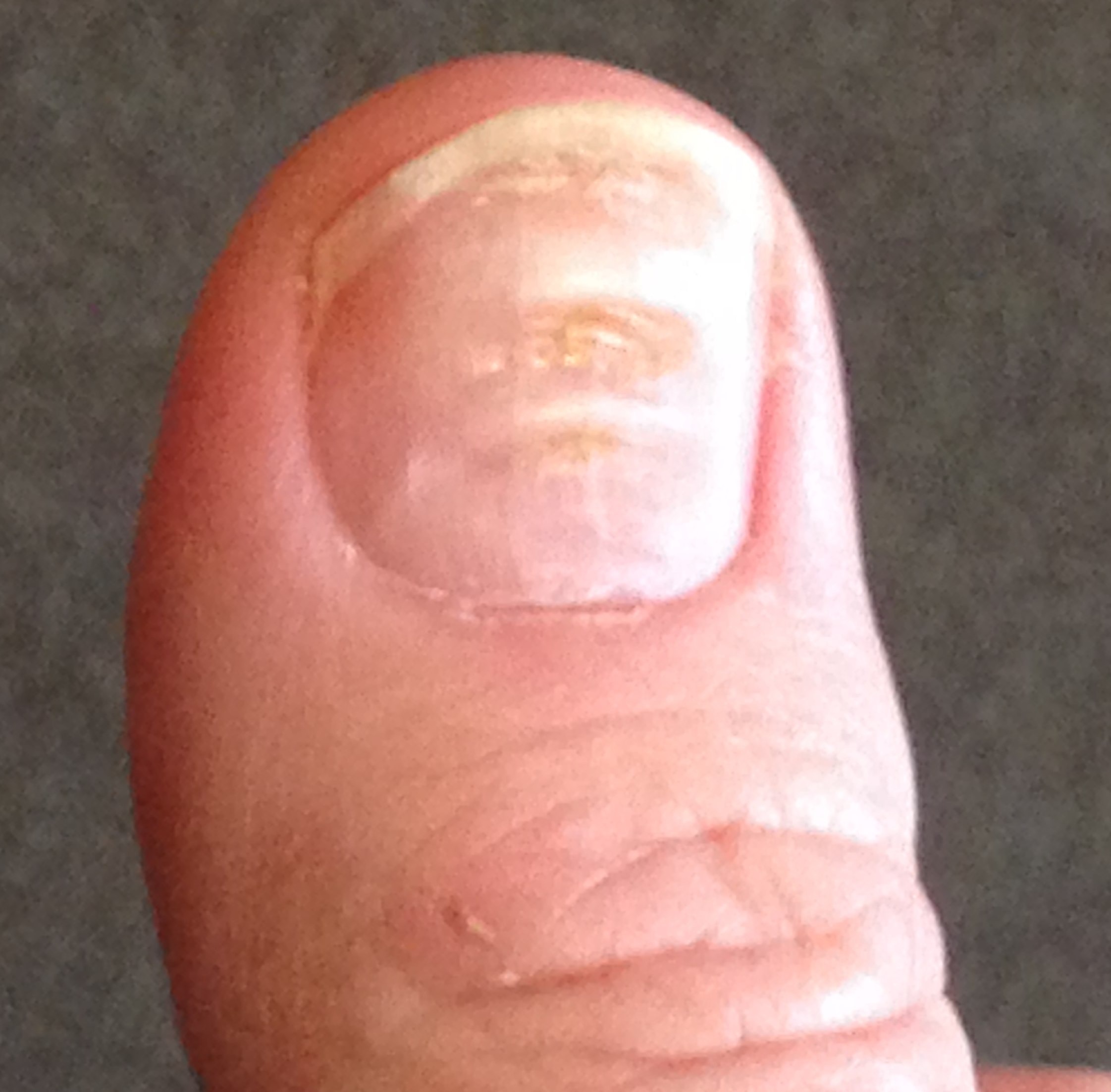 Beau's lines occur when there is a temporary interruption in nail growth due to a physical stress on the body, such as an infection, malnutrition or side-effects of medications such as chemotherapy drugs. While it's plausible that they're caused by COVID-19, they're definitely not an exclusive symptom of the disease.

As nails grow between 2 and 5 mm a month on average, Beau's lines tend to become noticeable four to five weeks after the physical stress happens – as the nail grows, the indentation is revealed.

The timing of the stressful event can be therefore estimated by looking at how far the Beau's lines are from the nail base. There's no specific treatment for Beau's lines, as they tend to eventually grow out if the underlying condition has resolved.

Currently, the available evidence suggests that there's no association between the severity of COVID-19 infection and the type or extent of nail changes.

The above are the two more common COVID-related nail complaints, but researchers have recorded some other unusual occurrences as well.

One female patient's nails loosened from the nail base and eventually fell out, three months after her infection. This phenomenon is known as onychomadesis and is thought to happen for similar reasons to Beau's lines appearing.

This patient didn't receive treatment for these changes as new healthy nails could be seen growing underneath those that detached, indicating that the issue was beginning to resolve itself.

Another patient, 112 days after testing positive, witnessed orange discoloration to their nail tips. No treatment was given and the discoloration had still not resolved after a month. The underlying mechanism behind this is unknown.

And in a third case, a patient had horizontal white lines appear on their nails that don't disappear with pressure. These are known as Mees' lines or transverse leukonychia. They appeared 45 days after testing positive for COVID-19. These tend to resolve with nail growth and do not require treatment. Mees' lines are thought to be caused by the abnormal production of proteins in the nail bed due to systemic disorders.

A mystery – for now

Although these three conditions all followed a COVID-19 infection, because we only have limited patients to look at in each case, it isn't possible to say yet whether they were caused by the disease. It is entirely possible that all three are unrelated to the condition.

Indeed, even with the Beau's lines and red half-moon pattern, there is still a long path to confirm a definite link between these changes and COVID-19 as well as the mechanisms behind them. For all these conditions, we'll need many more cases to be reported before we can say with certainty that there's a link.

Plus, even if there is a causative link, it's important to remember that not all patients with COVID-19 will have these nail conditions. And some of these abnormalities may not necessarily mean someone has had COVID-19. At best, we should regard these as potential indicators of a past infection – and not definitive proof.