An incredibly rare kind of snail with a genetic mutation that sees its shell spiral to the left instead of to the right has been paired with an equally rare mate, thanks to a public appeal from scientists in the UK.

If you're wondering why scientists don't have better things to do than play match-maker for mutant snails, it's because these mutations are so very rare, it makes the genes involved extremely difficult to study. But if everything goes right here (wink wink) we'll be able to study the mutation in these two snails' offspring.

Jeremy the snail – on the left in the picture above – was found in a compost heap, and came to the attention of evolutionary geneticist Angus Davison from the University of Nottingham.

Davison had been studying snails for some 20 years, but had never seen a garden snail (Cornu aspersum) with a left-handed – or anti-clockwise spiralling – shell.

That left-oriented shell is called the sinistral form, in terms of 'handedness' – but the vast majority of snails' shells spiral in a right-handed, clockwise direction (destral).

The gene mutation that makes this happen is estimated to affect only one in every 100,000 snails, but from Jeremy's perspective, it could hardly be considered lucky.

The mutation also causes the snail's genitals to be on the 'wrong' side, which makes it very difficult for right-handed snails to mate with them – ie. almost certainly every other snail Jeremy had ever met in its life.

And you thought human lefties had a hard time of it.

"Snails are hermaphrodites, meaning that if they want to they can reproduce on their own without the need for another mate," said Davison. "However, they don't really like doing this and from our perspective, the genetic data from offspring of two lefty snails would be far richer and more valuable to us."

So with Jeremy in hand, Davison put the call out on Twitter with the hashtag #snaillove, appealing to anybody who knew about another lefty snail to help find this "lonely mollusc a mate".

With the spiral story going viral and transforming Jeremy into a media sensation – a "shellebrity" as Davison puts it – not just one, but two people came forward with potential lefty suitors.

The first of these, aptly named "Lefty" (on the right in the image above) belongs to snail enthusiast Jade Sanchez Melton from Ipswich in the UK, who was only too happy to see what might occur if Jeremy and Lefty played house.

"Scientifically speaking, this is something which I believe has never been done and I am going to be fascinated to see whether breeding these two snails will result in more lefties, or whether their offspring will feature the more common clockwise coiling shells," she said.

Davison, who published research on the gene mutation earlier this year, took Jeremy to visit Lefty, to see if the two hit it off.

"[Y]ou can call it a honeymoon, if you like," he told Merrit Kennedy at NPR, adding that the two have been observed "flirting, which means gentle biting", but Davison is "fairly confident that they haven't mated yet".

If Jeremy and Lefty turn out not to have any chemistry, Davison might also travel to Spain with Jeremy – I'm not making this stuff up – to see if another potential mate in Majorca can provide the necessary sizzle.

Hopefully it won't come to that. As you can see in the image below, Jeremy and Lefty look like they're getting along just fine: 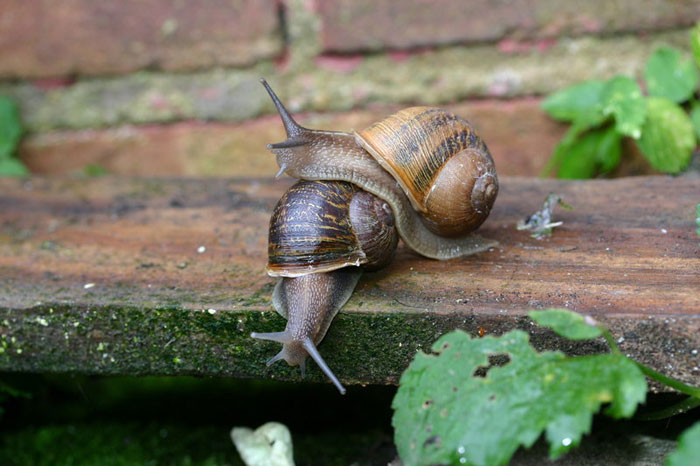 Davison's earlier research on the sinistral gene mutation is published in Current Biology.