It's been a few days since archaeologists from Egypt's antiquities ministry pried open a mysterious, 27 tonne (30 ton) black sarcophagus, and no ancient curse has befallen the planet despite tabloid warnings.

The sarcophagus was first found earlier in July by construction workers in a residential area of Alexandria, a city on Egypt's Mediterranean coast. It's the largest sarcophagus ever found in the city.

Some observers thought it might contain the corpse of Alexander the Great, as the sarcophagus dates back to the early Ptolemaic period (about 323 BCE), which began after his death.

What the archaeologists found inside the sarcophagus was grisly - but it was not the earth-shattering discovery some had hoped it would be.

The three skeletons found in the sarcophagus were most likely soldiers, according to Egypt's antiquities ministry, and one skull showed signs of fractures caused by a sharp instrument.

Check out some pictures of the sarcophagus below:

The sarcophagus was found in Alexandria, a city in the northern part of Egypt. Alexandria was the capital of Ptolemaic Egypt between 305 to 30 BCE after Alexander's army conquered the region and deposed the old pharaohs. Some had protested opening the sarcophagus as there were tabloid reports that an ancient curse would befall any who opened a royal coffin.

While the 27 tonne (30 ton), black sarcophagus looked royal, the skeletons found inside were anything but. Archaeologists say they appear to be soldiers. 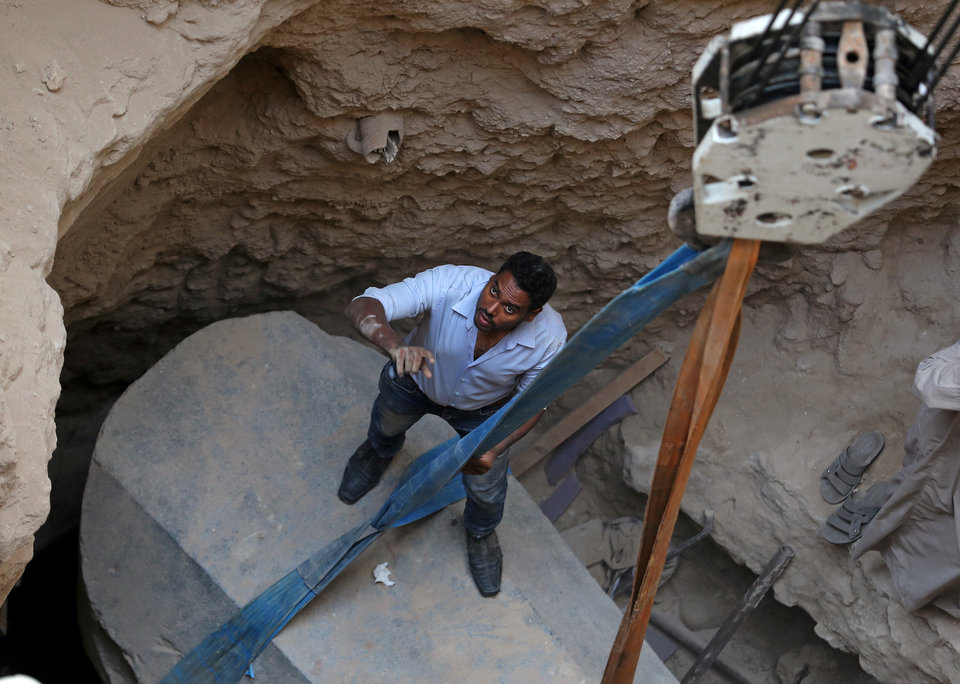 When archaeologists first tried to pry open the sarcophagus, they were repelled by a disgusting smell. That smell turned out not to be an ancient curse, but raw sewage water which had leaked into the sarcophagus. As for the curse, Mostafa Waziri, an archaeologist and the secretary-general of Egypt's antiquities ministry told assembled reporters: "I was the first to put my whole head inside the sarcophagus... and here I stand before you ... I am fine."

The skulls, one of which showed signs of a fracture, will be sent to the lab so archaeologists can answer questions about who they were and where they came from.