Sometime around 3.5 billion years ago, life on Earth was ignited into existence from molecular beginnings, and branched through time into the spectacular array of entities we know and love today. So goes the current line of thinking.

But we still don't even really have a clear definition of life. For example, is a virus alive? Or an entire forested ecosystem? Many aspects of an ecosystem are just as dependent on each other as organs within a body, after all.

So biologist Chris Kempes and complex systems researcher David Krakauer from Sante Fe Institute in New Mexico have posed the idea that our focus on evolution as a driving force of life may have "blinded us to additional general principles of life".

To explore this, the researchers broaden the definition of "life" to the union of two energetic and informatic processes that can encode and pass on adaptive information forward through time.

Using this definition vastly increases what can be seen as life, to include concepts such as culture, forests, and the economy. A more traditional definition might consider these as products of life, rather than life itself.

Based on their new definition, the researchers argue that life has emerged many times on Earth, and that we in fact are co-existing with many forms of current life.

Kempes and Krakauer's proposed framework has three hierarchical levels of constraints on what entails life, as illustrated below. 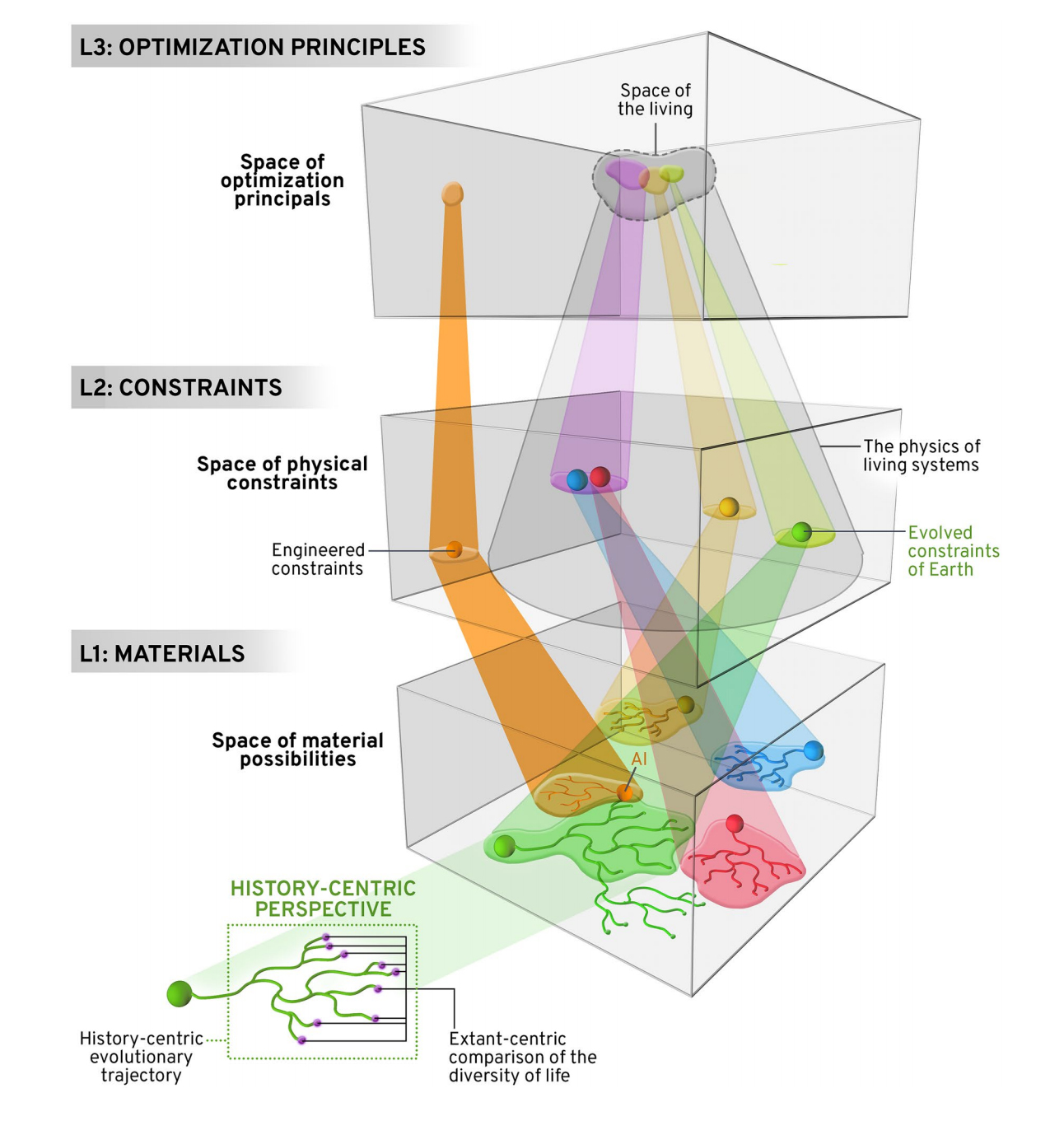 On level one, life is restricted by the possible materials it could be formed by (e.g. molecules). On level two, life is limited by the constraints of the wider Universe (e.g. gravity), and on three, life is optimized by adaptive processes (e.g. natural selection).

Within this hierarchy, concepts that join the worlds of physics with biology are considered. For example, life uses many gradients of energy production using the level one constraints, but all of these must adhere to the level two constraint of the law of thermodynamics.

"No cell will be found to contain more internal structure than can be accounted for by the total free energy available from the environment," the team writes in their paper.

This theory fully embraces life as a spectrum, rather than a discrete phenomenon, like what makes us as an individual? Only cells birthed from the same DNA, or our microbiome too? Not to mention the flowing connections between energy gained from the environment, cellular physiology, and evolutionary processes.

While this may all be as mind-bendingly theoretical as much of quantum physics, it's a fascinating attempt to look at an old concept from a new perspective. With complex systems particularly, such as life and the consequences of our living it, sometimes widening our thinking can trigger different ideas that lead to new understandings.

The pair hopes this broader view may lead to insights into what exactly we mean by life, help build devices to create or find it, and recognize what level of life we're seeing – even if it's fundamentally different to the familiar life on Earth.

Their definition would certainly end the controversy around whether viruses are truly alive, as they do neatly fall within Kempes and Krakauer's theory of life.

While the framework is certainly detailed and gives us much food for thought, shifting definitions is hard work. And when most of us ponder life, it's probably likely to be biological life only – at least until we meet aliens that defy biology as we know it, or our artificial intelligences become advanced enough to form minds of their own.

"Our claim is that we will be able to tell that we have a new theory of life when it is able to reveal to us many origins and many types of life," they write.

This theory was described in the Journal of Molecular Evolution.