New timelapse videos from satellites that have been monitoring Earth for decades have revealed the shocking reality of ice melting at accelerated speeds all over our planet.

The series focuses on glaciers and ice sheets in Alaska, Greenland and Antarctica, showing how, over the decades, most of the ice is retreating annually and not growing back.

"I think observational glaciology in terms of remote sensing is a very data-rich field now, compared to 1972, when you had a few images," says glaciologist Mark Fahnestock of the University of Alaska Fairbanks.

"So we are beginning to get a historical record of the speeds of glaciers, and so we can watch how rapidly that surface is lowering as things speed up, or where it's thickening."

Using Landsat images dating back to 1972 and continuing all the way up to this year for a total of nearly 48 years, Fahnestock created six-second timelapses of all the glaciers in Alaska and Yukon. While some of the ice masses grow over that time, most of them shrink quite shockingly.

It is, according to scientists, a clear illustration of the havoc being wreaked by climate change. You see, for instance, the Columbia glacier remaining stable until about the mid-1980s, when it starts disintegrating and retreating into the Chugach Mountains. It's now one of the most rapidly changing glaciers in the world.

Not even the growing glaciers are in the clear, such as the Hubbard glacier in eastern Alaska. Towards the end of the timelapse, a large chunk of the glacier calves into the ocean.

"That calving embayment is the first sign of weakness from Hubbard Glacier in almost 50 years - it's been advancing through the historical record," Fahnestock said. "The satellite images also show that these types of calving embayments were present in the decade before Columbia retreated."

Things weren't much better in Greenland where, according to satellite data collected between 1985 and 2018, glaciers retreated by five kilometres (three miles) on average, speeding up quite noticeably after 2000, with the ice losing more mass than it gains. And the phenomenon is not geographically constrained.

"One thing we've noticed is that retreat has been a pattern that we've seen across the ice sheets in Greenland," said glaciologist Michalea King of The Ohio State University. "It's not just limited to one region."

This retreat at glacial toes - or the ends of the glaciers - was accompanied by meltwater ponds (pictured below) appearing at higher and higher altitudes. 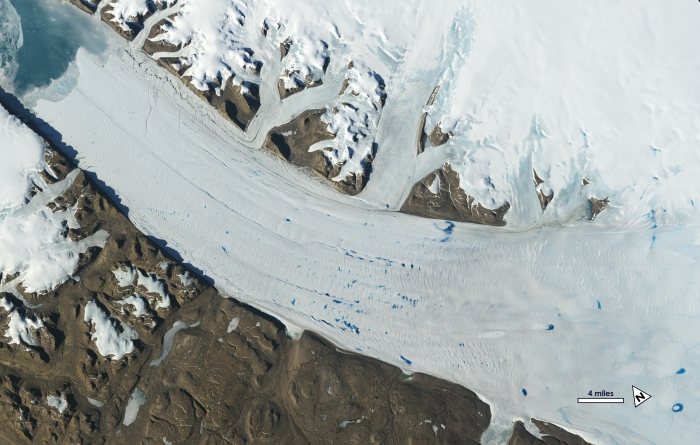 "We looked at how many lakes there are per year across the ice sheet and found an increasing trend over the last 20 years: a 27 percent increase in lakes," said glaciologist James Lea of the University of Liverpool in the UK. "We're also getting more and more lakes at higher elevations - areas that we weren't expecting to see lakes in until 2050 or 2060."

And, down in Antarctica, microwave radar images revealed lakes of liquid water beneath the ice and snow, which remain liquid even in the depths of winter. These lakes can destabilise ice shelves, accelerating their calving.

We've known of such lakes beneath both Antarctica and the Greenland ice sheet; but the researchers' data suggest there may be more subglacial lakes in Antarctica than we knew about, suggesting that the loss of the ice shelves may be more advanced.

Put all together, the decades of satellite data show a trend that is not limited by region: the world's permanent ice is melting, and these videos demonstrate that stark reality more clearly than ever before.

It's just one of many, many signs that Earth is undergoing rapid climate change; it's not too late to do something about it.

The researcher was presented at the 2019 Fall Meeting of the American Geophysical Union.