It may look like a dragon fresh off the set of Game of Thrones, but it turns out that one of the world's best preserved dinosaurs faced some tough predators when it roamed the Cretaceous landscape some 110 million years ago.

The statue-like specimen is so good that researchers were able to see the dinosaur's skin colour, which likely played a role in camouflage to avoid catching the eye of the massive meat-eaters that dominated the environment.

"Strong predation on a massive, heavily-armoured dinosaur illustrates just how dangerous the dinosaur predators of the Cretaceous must have been," says one the researchers Caleb Brown from Royal Tyrrell Museum in Canada.

The plant-eating "dinosaur equivalent of a tank" first made waves back in May when it was publicly unveiled by researchers at the Royal Tyrrell Museum. It was discovered by accident back in March 2011 when a heavy-machine operator was digging through oil sands in Alberta.

Now, the researchers have named the 5.5 metre (18-foot-long) nodosaur Borealopelta markmitchelli, in honour of Royal Tyrrell Museum technician Mark Mitchell, who spent over 7,000 hours carefully unearthing the fossil from its rocky grave.

"This nodosaur is truly remarkable in that it is completely covered in preserved scaly skin, yet is also preserved in three dimensions, retaining the original shape of the animal," says Brown.

"It will go down in science history as one of the most beautiful and best preserved dinosaur specimens--the Mona Lisa of dinosaurs."

Weighing in at a hefty 1,300 kilograms (2,800 pounds), the nodosaur is a close relative of the ankylosauridae dinosaur family, a group which includes the spiky Ghostbusters monster lookalike, Zuul (Zuul crurivastato). 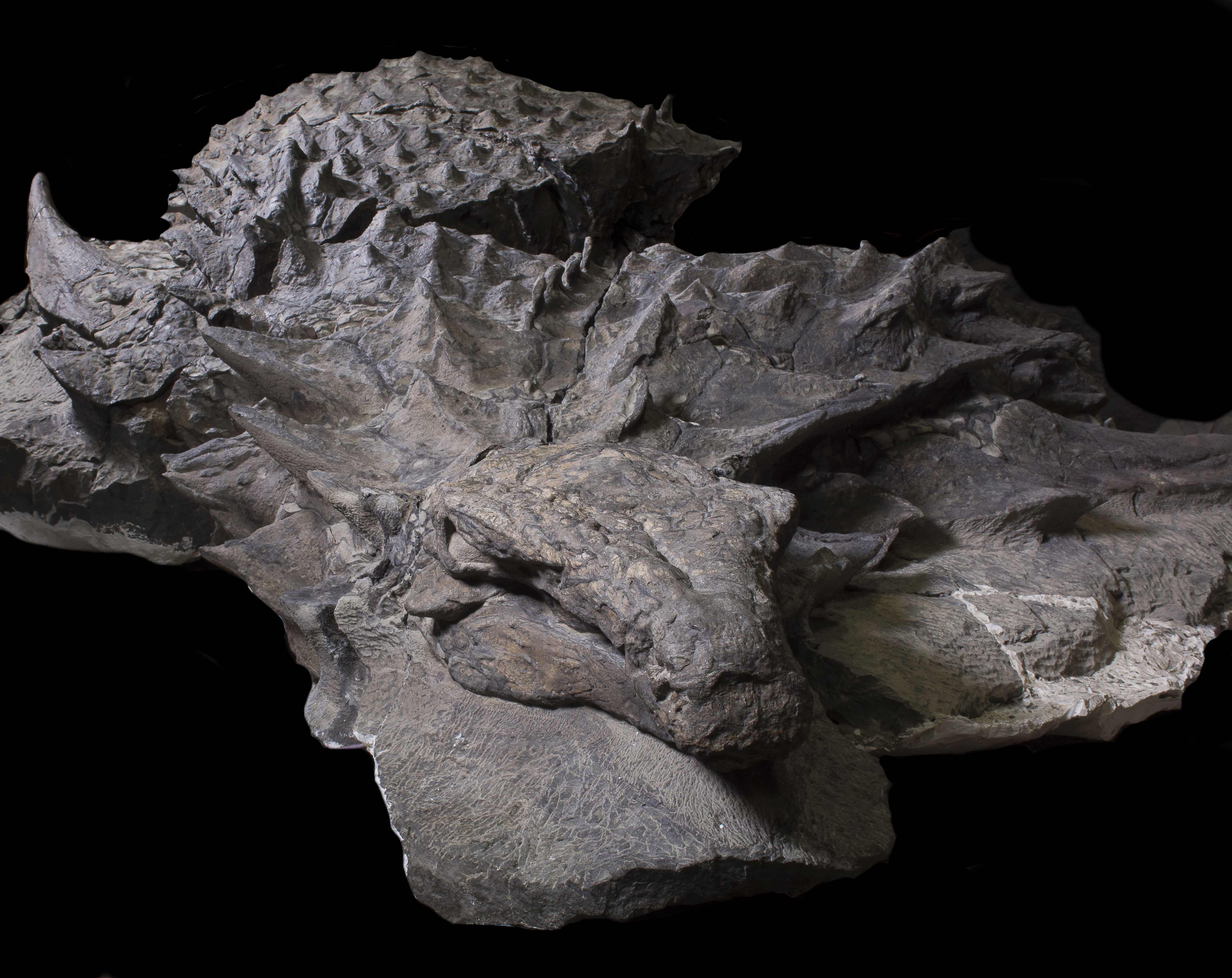 While other members of the heavily-armoured ankylosaurid group spent their days wielding their sledgehammer-like tails, nodosaurs lumbered along with a smooth flexible tail, chunky scales and thick spikes.

If all of that shielding wasn't enough to keep predators away, Brown and his team have revealed the mummy-like nodosaur may have also been a master at stealthily blending into its surroundings.

Using mass spectrometry techniques, the researchers were able to detect pigments in the scales of the dinosaur. Interestingly, they found that the specimen's colouring was light on the underside of the body and a darker reddish-brown on top.

This colouration is known as countershading, which is a common form of camouflage seen in a variety of animals today, including penguins and deer. The two-toned concealment tends to show up in animals that are under pressure from predators.

Seeing countershading in this ancient megaherbivore is surprising because the dinosaur is much larger in size than the countershaded animals of today.

This countershading suggests that despite the dinosaur's plate-like armour and spiny horn sheaths, the nodosaur was under significant stress from larger carnivorous predators.

The new findings paint a more detailed picture of the unique predator-prey relationships in the Mesozoic Era and how they differ from those of today.

Now, the team are taking a closer look at the nodosaur's stomach contents to get an idea of what it ate for its last meal before being swept away to its ocean grave. The researchers also hope to study the dinosaur's armour even more closely.

"You don't need to use much imagination to reconstruct it; if you just squint your eyes a bit, you could almost believe it was sleeping," says Brown.