The four-limbed animals of the world have several things in common. Spines. Bilateral symmetry. And most of us have (or, in the case of birds, had) five digits at the end of each of our four limbs.

When and how these digits emerged in animals has been something of a mystery. Palaeontologists have just found the earliest evidence of this anatomical feature, in the fin of a fish that lived 380 million years ago.

The rudimentary digit bones may not look like much, but they mark one of the most important transitions in vertebrate evolution.

"We have made a major breakthrough in the origin of how the hand was first formed for all vertebrates," palaeontologist John Long of Flinders University in Australia told ScienceAlert.

"This is the first time that we have unequivocally discovered fingers locked in a fin with fin-rays in any known fish. The articulating digits in the fin are like the finger bones found in the hands of most animals," he said in a statement.

The transition from aquatic fish to four-limbed creature (tetrapod) is one of the most important in evolutionary history, yet there are significant gaps in our knowledge. One of those gaps has been the point at which fish emerged from the depths and started foraging in shallower waters - what's considered to be an intermediate step before crawling out onto land.

In order to complete that transition, animals would have needed something pretty vital for crawling - that is, hands and feet, digits and all.

This is where a specimen of an ancient lobe-finned fish called Elpistostege watsoni enters the picture. It's a type of tetrapod-like fish belonging to an order called Elpistostegalia, on the ancestral line that leads to tetrapods; our understanding of the emergence of tetrapods largely relies on what we know about that order. 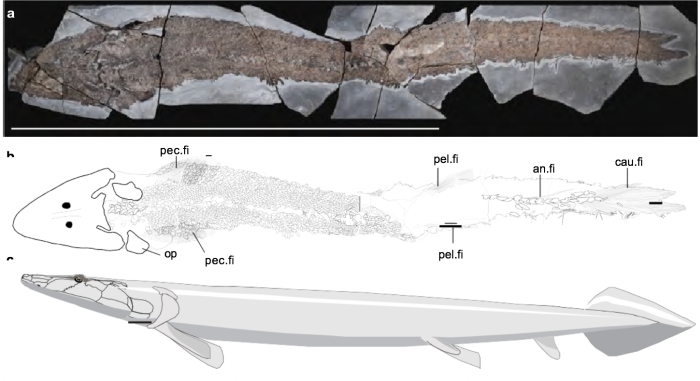 But the elpistostegalian fossil record has been pretty scarce, with incomplete pectoral fin skeletal anatomy. Until 2010, when an almost complete 1.57-metre (5.15-foot) fossilised E. watsoni skeleton was found in the Escuminac Formation of Miguasha in Quebec, Canada.

Long and his colleague palaeontologist Richard Cloutier from Universite du Quebec a Rimouski in Canada have been carefully studying the fossilised bones to see what they can tell us about this mysterious animal. This paper is the first in a series, and it describes how the pair and their team used CT scanning to discover the skeletal anatomy of the fin.

"We focused on the discovery of digit bones in the fin as this was a really spectacular discovery - the first definite (not controversial) case of a fish with finger bones," Long told ScienceAlert.

"Once we had compared our fin skeleton of Elpistostege with the arm and hand skeletons of terrestrial animals, it became clear that the rows of small digit bones were - in the evolutionary sense - the same as to phalange bones in the hands of land animals (like us)."

The bones are not exactly true fingers, since they're tucked inside the fin like a mitten, and can't move freely. The fin still retains the outer fringe covered in fin-ray bones, called lepidotrichia; the fingers wouldn't be able to move freely unless E. watsoni lost those.

But it does confirm the animal as an intermediate between fish and tetrapods. Although some have thought digits and carpals may be unique to tetrapods, we have had hints otherwise; for instance, the tetrapod-like arrangement of humerus, radius and ulna bones was discovered in lobe-finned fishes all the way back in 1892.

"The origin of digits relates to developing the capability for the fish to support its weight in shallow water or for short trips out on land. The increased number of small bones in the fin allows more planes of flexibility to spread out its weight through the fin," Cloutier explained.

"The other features the study revealed concern the structure of the upper arm bone or humerus, which also shows features present that are shared with early amphibians. Elpistostege is not necessarily our ancestor, but it is the closest we can get to a true 'transitional fossil', an intermediate between fishes and tetrapods."

The next part of the team's work describing the fossil will focus on the head and parts of the skull, making comparisons with early tetrapods to further trace those evolutionary connections.