This Beautiful 'Jewel Ice' Is So Rare, It Only Washes Up in Japan

Washing up on beaches around the mouth of the Tokachi River in Japan, a beautiful natural phenomenon sees crystal-clear ice blocks scattered like gem stones over the sand – and there's no other ice quite like it anywhere else in the world.

These distinctive ice fragments have come to be known as "jewel ice" or "Tokachi River ice", and they're made by a unique combination of salt-free riverwater, sub-zero temperatures, and ocean tides.

The jewel ice that washes up on the northern island of Hokkaido hadn't been widely noticed until just recently when it was spied by a local, but it's now famous enough to be featured on the tourism site for the area – and is attracting photographers in their droves every January and February.

When the temperature drops low enough, the mouth of the Tokachi River freezes over. Blocks of ice then get broken off, drifting out into the ocean before washing up with the tide. Eventually, they melt away into the sand. 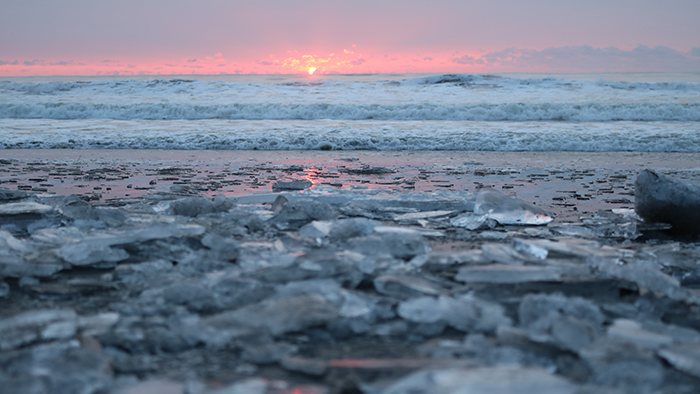 "I had never heard of this type of ice and have never seen any sea ice like it," ocean physicist Peter Wadhams from the University of Cambridge in the UK told The New York Times.

"It's just river ice, which is transparent because it has no salt in it."

That transparency and purity causes the jewel-like effect, with the ice blocks giving off an orange or sapphire hue, depending on the time of day and the colour of the sky.

The Tokachi River site is the only known spot to see this distinct kind of river ice, according to Wadhams, but clear glacier ice in Chilean fjords and Alaskan inlets could have similar properties, he says.

Ice chemist Werner F. Kuhs told Joanna Klein at The New York Times that the composition of the jewel ice is similar to snow crystals.

"Usually lake or river ice is not that transparent, as numerous small air bubbles are formed inside the ice upon freezing," he says.

"[L]arger portions of the ice can grow bubble-free with the air accumulated in separated portions; in fact, some larger bubbles are seen in some of the enlarged 'jewel' crystals."

As astrophysicist Tamela Maciel explains on the Physics Central blog, getting clear ice requires a slow freezing process, so impurities and air bubbles have a chance to rise to the surface and escape – and the purer the water to begin with, the better.

As you can see in the posts above, social media has now helped to get the beauty of the Tokachi River ice out to the wider world, and there are now guided tours around the area and a museum dedicated to the phenomenon.

If you want to have the best chance of seeing this natural spectacle for yourself, then late January or early February is the best time to go – and ice updates are posted on the local town's tourism website.

We're still saving up for a ticket, but in the meantime there's always Instagram.