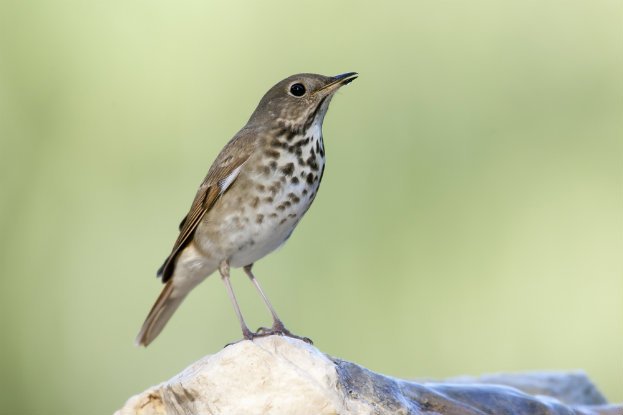 This Bird Is One of The Most Talented Singers on Earth

The melodious tunes of the North American hermit thrush (Catharus guttatus) are one of the finest sounds in nature. The songbird has attracted scores of birdwatchers since the early 20th century, who compared its songs to the sounds of a woodwind instrument. Now, for the first time, researchers have found evidence that the bird sings using an harmonic series - a pattern of notes used in human music.

In the human harmonic scale, each note is based on all multiples of a base frequency. Put simply, the first note starts at a particular frequency, followed by a note that is double this frequency, and so on. This string of notes is the basis for all music, from Mozart to Taylor Swift, and apparently even the hermit thrush.

To make this discovery, researchers from the University of Vienna in Austria analysed 71 different recordings from 14 male hermit thrushes, collected from locations spanning North America. Male hermit thrushes sing six to 10 types of songs, and most are high-pitched and fast. The team isolated the frequencies corresponding to each note, and calculated the mathematical relationship between several different pitches in each recording. They performed the same analysis on the recordings played on a woodwind instrument called an alphorn, and reported that over 70 percent of the bird songs contained the same mathematical ratios as human harmony.

“The same mathematical principles that dictate the scales used in nearly all human music can also be found in the notes the hermit thrush chooses to sing," write the researchers in the study, which is published in the journal Proceedings of the National Academy of Sciences.

Just like most songbirds, the male hermit thrush sings to mark his territory and attract mates, which the team suggests could be an evolutionary incentive for the bird to hit the right notes. While some of the hermit thrush recordings didn’t follow the harmonic series, the researchers suggest that the melodious bird appears to have a preference for singing ones that do.

The findings could provide clues about the origins of music, fuelling the ongoing debate about how much of our musical heritage is influenced by biological factors versus cultural ones.

"The fact that at least one species uses the principles found in human music suggests that there may be biological reasons for the basis of music," Bruno Gingras, biologist and one of the authors of the study, told Dino Grandoni from The Huffington Post.

We certainly think that this little bird has potential to join the next youth choir - if you don’t believe us, watch the video below: