There's no shortage of strange things living at the bottom of our oceans, but earlier this week a specimen was found off the coast of New Zealand that's so bizarre, it even left the experts stumped.

Initially described by the Museum of New Zealand Te Papa Tongarewa as a fish with 'legs', the black, spiny animal has two fins on either side of its abdomen that look like they could be used to walk along the bottom of the sea. The fish was discovered in the Bay of Islands, off the coast of New Zealand's North Island, hidden amongst a pile of kelp on a boat.

Owner Glenys Howse tried to keep the fish alive so that it could be sent to an aquarium, but unfortunately it died shortly afterwards, so was sent to the museum instead for identification.

Researchers have now confirmed that the specimen is a striated frogfish (Antennarius striatus) - or anglerfish, as they're called in Australia. If that name doesn't immediately give you the shudders, that means it's related to this guy:

The researchers were pretty convinced early on that the animal was a frogfish, but it took them days to work out exactly which kind. Its lure seemed to suggest it was a striated frogfish, but usually the species has a characteristic stripy pattern - this one, on the other hand, is almost entirely black.

Although frogfish are known for their ability to adjust their pigmentation to camouflage themselves against the ocean floor, usually there's some trace of pattern still visible. The researchers are now performing further tests to find out more about this rare individual, and investigating whether it might belong to a new species or subspecies.

"It is very unusual in that it is completely black, with the only a trace of a pattern on the shaft of the Illicium (stem of the lure)," the Museum of New Zealand Te Papa Tongarewa wrote on Facebook. "There are competing theories around this: is it one highly variable species, or several? The tissue sample we took will help to answer this."

In case you're wondering why frogfish look so weird, it's thanks to their cool hunting strategy. The fish use their fins to 'walk' along the ocean floor and keep them stable on rocky outcrops and coral reefs, where they chill out waiting for prey, which they attract with their worm-like lure.

When another animal gets close, frogfish have the unique ability of being able to outwardly expand their mouths, as well as their bodies, allowing them to eat fish the same size as them (just imagine being able to eat something human-sized).

"Frogfishes have the fastest bite of any vertebrate," the New Zealand museum explains. "Their mouths expand at the speed approaching a .22 rifle bullet - and that's in a medium 800x denser than air."

The animals are found in most tropical and subtropical waters around the world, and live anywhere between the shallows to 210 m below the surface of the ocean, with most animals found at depths of around 40 m.

Although it's said that this frogfish died, the specimen will teach researchers a lot more about the elusive species, and there's also talk of the museum preserving the animal so that it can be seen by the public.

Who wouldn't want to get up close and personal with this face? 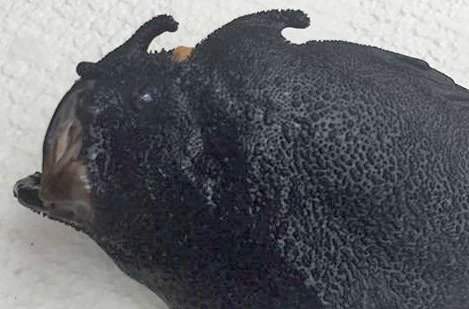