This Bomb-Proof Bag Can Suppress Explosions on Aircraft

Despite high-level security measures, incidents like the downing of a Russian passenger jet in October – which killed 224 people and is thought to possibly have been caused by a bomb on board – indicate how vulnerable aircraft are to internal explosions.

But an innovation from researchers in the UK could go a long way in making airplanes safe from on-board bombs and explosive devices. The Fly-Bag, developed by researchers at the University of Sheffield, is a bomb-proof lining that can be erected within the luggage hold of an aircraft to contain any blasts that emanate from explosives concealed in baggage.

"The risk that we always have in aviation security is can someone get something on board an aircraft?" security consultant Matthew Finn, who isn't involved with the research, told Matthew Stock at Reuters. "What the Fly-Bag does is it actually accepts that there may be an instance where somebody is successful in getting something on board an aircraft. And therefore, the next question becomes how can we mitigate the effect of an explosive device detonating at altitude in an aircraft."

The Fly-Bag's unique lining, which was successfully tested earlier in the year, looks to be the answer. The bag uses multiple layers of fabrics and composites including aramid, which is used in ballistic body armour. The combination of materials gives the Fly-Bag high strength and resistance to impact and heat. 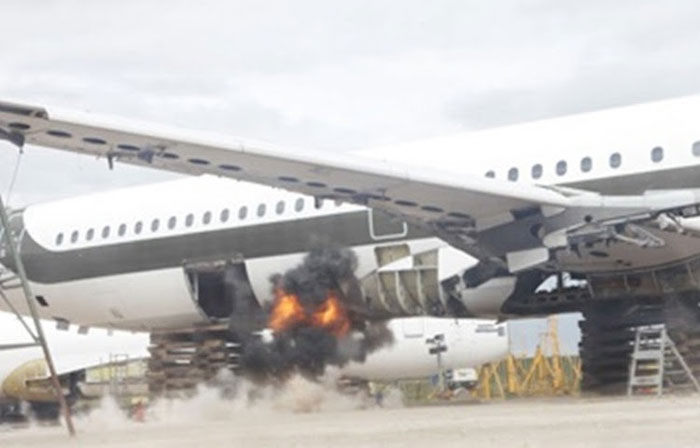 A test explosion without the Fly-Bag installed. The device was able to contain a blast of equal force. Credit: University of Sheffield

"Key to the concept is that the lining is flexible and this adds to its resilience when containing the explosive force and any fragments produced," said lead researcher and engineer Andy Tyas. "This helps to ensure that the Fly-Bag acts as a membrane rather than as a rigid-walled container which might shatter on impact."

According to the team, the lining is lighter and cheaper than hardened luggage containers (HULD), and presumably is significantly easier to install in various sizes of aircraft due to its flexibility.

In testing on a grounded aircraft this year, the Fly-Bag showed it was capable of successfully containing an explosion emanating from a test bomb placed in a suitcase – while an explosion of equal force without the lining in place ripped a dramatic hole in the airplane's fuselage (see above).

"I think it has the capacity to transform how we look at hold baggage," Finn told Reuters. "We've spent a lot of time thinking about the reconciliation of passengers and their bags; since 1988, since the Lockerbie Disaster, that's been a big focus of the airline industry… I think it's a really interesting development and I'd like to see it deployed more widely."