A digital reconstruction of the Stajnia pendant and its looping decoration. (Antonino Vazzana/BONES Lab)

It doesn't look like much. A little shorter than your thumb, perhaps, yellowed and scarred with age, and cracked clean through.

But this small piece of mammoth ivory recovered from a cave in what is now Poland may turn out to be an important piece of human history. According to a new archaeological analysis of the object, it's the oldest known piece of decorated jewelry made by Homo sapiens in all of Eurasia.

It's a pendant, made of mammoth bone patterned with small holes, discovered in the archaeological site in Stajnia Cave, Poland in 2010. The new work dates it to around 41,500 years ago, during the Upper Paleolithic – around the same time that H. sapiens were starting to disperse throughout Europe.

That would make the find spectacular, but it's not yet a done deal. Although the paper has appeared in the journal Scientific Reports, there appears to be some controversy, with a review underway to address as-yet-unspecified concerns.

But the researchers are confident in their findings.

"Determining the exact age of this jewelry was fundamental for its cultural attribution, and we are thrilled of the result," says archaeologist Sahra Talamo of the University of Bologna in Italy.

"If we want to seriously solve the debate on when mobiliary art emerged in Paleolithic groups, we need to radiocarbon date these ornaments, especially those found during past fieldwork or in complex stratigraphic sequences." The pendant, discovered alongside an awl made of horse bone dated to roughly the same period, is fascinating. It's 4.5 centimeters (1.8 inches) long, drilled with two holes, and decorated with a long, irregular loop of at least 50 tiny impressions that may be puncture marks.

This style of geometric, punctured patterning is consistent with other decorated mammoth ivory objects recovered from France and Germany, the dating of which has been inconclusive.

Slightly older examples of pendants have been uncovered in Europe, made from materials like bear teeth. This, however, is the first identified with a pattern impressed onto its surface.

Because decoration and adornment of the human body are considered to be among the earliest manifestations of symbolic behavior, archaeologists and anthropologists are keen to identify when and how it emerged in different cultures and different parts of the world.

"Timing when and where personal ornaments appeared in the archaeological record are important for reconstructing the trajectories of abstract thinking of archaic humans and understanding how figurative representations varied through time," the researchers wrote in their paper.

In addition to radiocarbon dating, they subjected the pendant and awl to micro-tomographic scans. This allowed the researchers to reconstruct the objects in three dimensions, which in turn allowed detailed measurements and analyses for which the artifact may have been too fragile.

Stajnia Cave was occupied, at different times, by both H. sapiens and Neanderthals. The layer in which the pendant and awl were found included traces of both.

What's more, analysis of material from the cave suggests a history of frost and recent human interference might have moved items around. It was only through precise radiocarbon dating that the research team was able to link the two objects with the H. sapiens occupation of the cave. 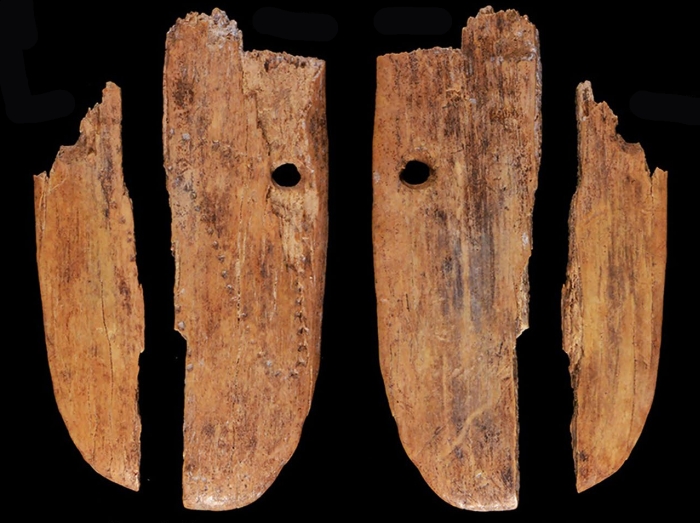 They concluded that the pendant was likely discarded there after it broke, where it became buried under the cave floor, where we would discover it tens of thousands of years later.

"This piece of jewelry shows the great creativity and extraordinary manual skills of members of the group of H. sapiens that occupied the site," says paleoanthropologist Wioletta Nowaczewska of Wrocław University in Poland.

"The thickness of the plate is about 3.7 millimeters, showing an astonishing precision on carving the punctures and the two holes for wearing it."

It's unclear what the loop of dots means. It could represent a lunar analemma – the changing position of the Moon in the sky at the same time of day over the course of a year. It could also represent kills made on the hunt, the researchers speculate.

Or it could just be that whoever made or wore it liked the pattern – but the fact that similar patterns have been found on other objects from across Europe, made completely independently, would suggest some kind of symbolic significance.

Future analyses of these enigmatic patterns, including precise radiocarbon dating of the other artifacts, could help figure out what that is.

Meanwhile, the researchers said, the work helps fill in some of the gaps in our knowledge of the expansion of H. sapiens throughout Europe.

"The ages of the ivory pendant and the bone awl found at Stajnia Cave finally demonstrate that the dispersal of Homo sapiens in Poland took place as early as in Central and Western Europe," says anthropologist Andrea Picin of the Max Planck Institute for Evolutionary Anthropology in Germany.

"This remarkable result will change the perspective on how adaptable these early groups were and call into question the monocentric model of diffusion of the artistic innovation in the Aurignacian."

That is, of course, if the work stands. As Springer has stated in an editor's note:

"Readers are alerted that concerns have been raised about this Article and are being considered by the Editors. A further editorial response will follow after all parties have had an opportunity to respond in full."