The Circles in This Illusion Actually Aren't Changing Shape or Moving at All, Sorry

The internet is never short on optical illusions – trippy gifs and animations that trick our brains and misguide our senses.

Some are worthwhile unravelling, giving us some clever psychological tools we can put to use to treat and diagnose. Others are harder to break down, but give us something novel to fight over in the meantime. Then there are some that truly blow our minds.

A word of warning here: if your brain isn't happy when met with things that spin and flash, get somebody to read this out to you and just imagine how astonishing this illusionary art is.

Got it? Good. Let's continue.

Last year, a pair of rotating blue-and-yellow circles attributed to the Japanese digital artist @jagarikin did the rounds, much to our amusement (and confusion).

Since then, there's been a variation or two on the same theme. Take this recent rainbow wheel illusion for example.

Then there is this black-and-white one.

Of course, everybody has an opinion on what kind of mental magic is going on here.

Some ideas we can dismiss pretty easily.

Many optical illusions work by toying with contrasts in our field of vision. For example, this brilliant example covered by Phil Plait at Slate also involves rotating striped circles.

Animation based on work by Arthur Shapiro. (Phil Plait/Slate)

These specific spinners, however, appear to change thanks to the way our brains deal with information immediately within our focus, which is different to the way it processes peripheral information.

The fact we can look directly at each of @jagarikin's circles and still see the same illusion suggests we can rule out this quirk of neurology.

As for those arrows exerting some kind of subtle influence, forget about them.

Below, Twitter user @XQA999 has removed them so we can also exclude any subliminal effects they might have.

Thanks to @blindrob's handy additions we can also be certain the circles really are stationary.

For anyone still doubting. pic.twitter.com/QLQVdWPaTJ

Curiously, by placing a black ring around the first circle, @blindrob also shows us the illusion seems to be dampened by a border.

If we look carefully at the other circles, there's something else that's a touch unusual about the edges of the circles. On each of them we can make out strips (just a few pixels wide) of contrasting colors on the inner and outer rims. 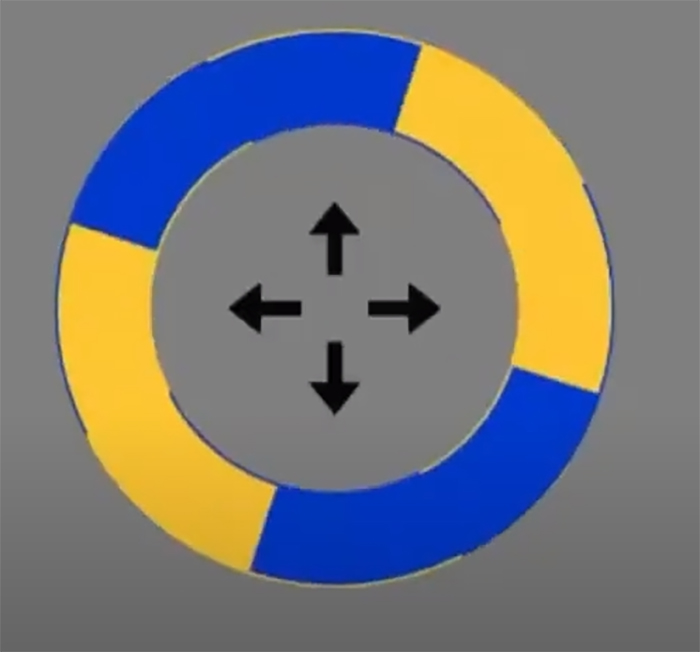 Note the blue pixels on the outside of the yellow blocks.

As the circle spins, the directions and sizes of the circles change in accordance with the sequences of these two border lines.

Knowing all of this is like knowing the magician's stage is rigged. Sure, we can see trap doors now, but speculating over the precise method by which our brains turn flashes of color into a brilliant performance requires digging deeper into the mechanics of vision.

For more than a century, the Gestalt School of psychology has delved into the ways our brains turn changes in visual stimulation into form and motion.

One way our nervous system perceives movement results from something called the phi phenomenon. This neurological program turns rapid sequences of changes in color or brightness into something more profound, like a general sense that something has changed position.

This only partially explains what we're seeing though. It's not a jittery, shaking mess after all, but a smooth movement in a single direction, one that doesn't seem like it would ever stop.

An art piece made by University of Lincoln psychologist George Mather gives us the last piece of this puzzle. It demonstrates how contrasts in shade applied in the right order to a few frames of a scene jumping back and forth create a seamless, endless motion, one that's solely in a forward direction.

In the case of the moving circles above, the shifting contrasts in the borders around the colors appear to be doing all this work to create the perceived movements that aren't really there.

The neurological explanation is somewhat more involved, relying on the precise timing of stimulating and inhibiting visual neurons.

Illusions based on both principles have dazzled and delighted us for generations. Thanks to amazingly talented artists like @jagarikin, we'll continue to uncover countless new ways to apply these tricks for our entertainment.

We're onto you, brain.