This Crazy Alien Horizon Is Actually a Real Sunrise on Earth

Photographed in Red River, New Mexico, on January 9, this is one of the most beautiful sunrises I've ever seen.

While it looks photoshopped (or alien), in reality, the combination of arcs and halos is caused by an extremely rare combination of solar phenomena happening all at once.

The image was captured by Joshua Thomas who emailed the US National Weather Service (NWS) in Texas to find out what was going on.

With a little help from researchers at Atmospheric Optics, the NWS annotated the image, describing each of the optical phenomena that are happening at once, and posted it to Facebook. While on their own most aren't that rare, the combination is pretty mind-blowing. 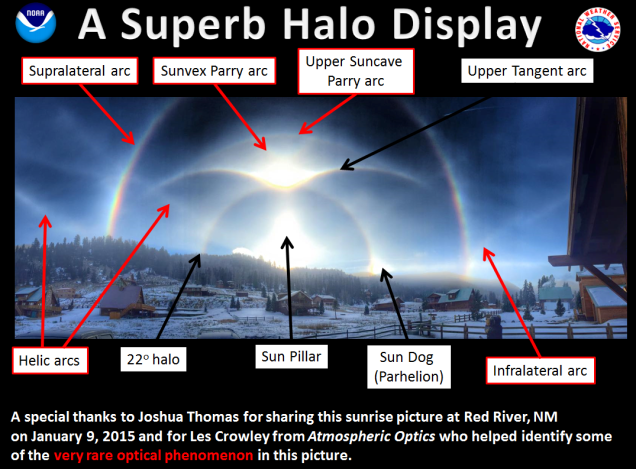 But what caused the display? The majority of these phenomena, such as 22º halos, Sun pillars and Sun dogs, are caused by sunlight interacting with ice crystals in the atmosphere. So it seems that the cold weather, combined with the angle of the Sun at sunrise, led to the unlikely appearance of so many arcs and halos at once.

The whole thing is just so pretty. It's almost enough to make this Sun lover want to head north to colder climates. Almost.