Now, after decades of finding the nearly unfindable, Ballard will set a course August 7 for Nikumaroro, the uninhabited Pacific island south of nowhere, and attempt to solve the mystery of aviator Amelia Earhart's disappearance.

Earhart vanished in 1937 alongside navigator Fred Noonan as she sought to become the first female pilot to circumnavigate the globe. Since then, explorers and researchers have obsessed over Earhart's disappearance, perhaps the greatest unsolved mystery of the 20th century.

That confounding mystery has piqued Ballard's interest — and warded him off for the same reason.

"Amelia Earhart has been on my sonar screen for a long, long time. And I've passed on it," he told The Washington Post on Wednesday, a day before setting off for the Pacific. "I'm in the business of finding things. I don't want to not find things."

But research opportunities in the region, he said, pulled him to the 1.3-mile-wide (2 kilometre wide) Nikumaroro, roughly halfway between Hawaii and Australia in one of the most remote places on the planet.

Ballard said his dual teams, on land and crawling along the nearby seafloor, will operate based on the most prevalent theory: that Earhart landed her plane on jagged coral ringing the northwest side of Nikumaroro and sent a barrage of increasingly desperate radio messages for help before the tide dragged the plane away.

She later died on the island, the theory goes, leaving some to endlessly speculate whether bones recovered there were hers.

In this theory, Earhart's Lockheed Model 10 Electra was taken by the sea and sent to a cold and dark abyss. The US Navy's official conclusion is that Earhart and Noonan died shortly after crashing into the Pacific Ocean.

Ballard rejects the notion that she crashed farther out in the sea, citing a photo taken months later possibly showing landing gear poking from a reef and what researchers said were numerous recorded distress calls that recounted the threat of rising water.

If those things are true, he said, and Earhart had to make an emergency landing, then she would have eyed the upturned-comma-shaped Nikumaroro as one of few feasible landing spots in the Phoenix Islands Protected Area. 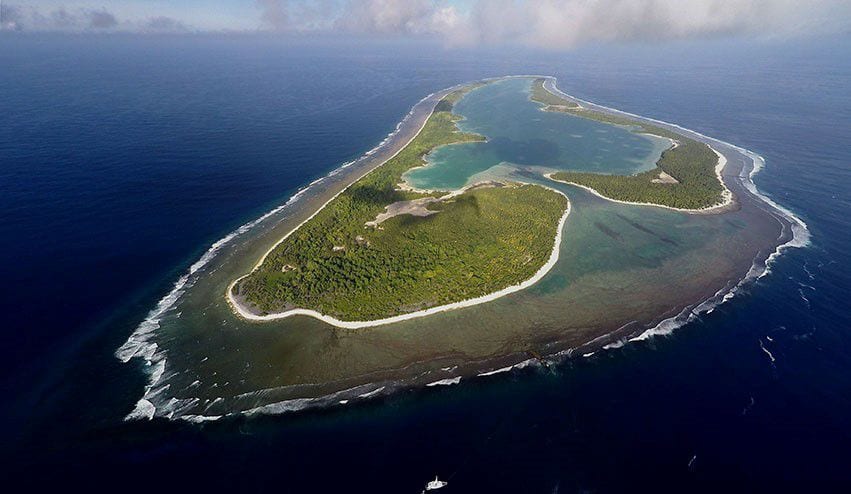 Researchers believe Earhart may have landed on Nikumaroro's reef. (The Washington Post)

On this trip, Ballard's experience on 160 deep-sea expeditions is the lodestar.

While one team will scour Nikumaroro with bone-sniffing dogs, Ballard and his co-leader, Allison Fundis, will comb the ocean depths around the island. The first step: crew members on board the Nautilus will map the area with hull-mounted imaging equipment that distinguishing between hard and soft objects in a black-and-white, "Ansel Adams kind of image," he said.

Regular sonar will not do in that terrain. Nikumaroro is a product of volcanic ridgelines vaulting from Earth's crust, transforming the region into a thicket of gullies and valleys.

Once the area is mapped, two camera-equipped robotic vessels will traverse the seabed, with humans, rather than sonar pings, watching video screens for man-made objects. "Sonar can't tell the difference between a rock the size of an engine and an engine," Ballard said, "but your eyes can."

Unlike the search for the Titanic, there is not a huge swath of ocean to comb.

Consider the geography of Nikumaroro. It's a plateau rising tens of feet above sea level, like a mesa with a 10,000-foot downward slope plunging into the seafloor, Ballard said. The search vehicle will focus on the theory that the plane tumbled down the slope.

Potential debris fields will orient searchers using a path perpendicular to a found engine, pedal or wing, much like how the Titanic's detritus was a trail of bread crumbs leading to its rusticle-dotted husk.

A similar method was used by Ballard to find Roman ships after discovering cargo thrown overboard as the vessels sank. Those ships were smaller than Earhart's Electra.

"Push a plane off the cliff and it will leave stuff all along the way," Ballard said. "And all you need is one piece."

Ballard, founder of the Ocean Exploration Trust, said his mission will harness much of the evidence of the landing theory gathered by another group, the International Group for Historic Aircraft Recovery.

"We will be delighted if Dr. Ballard is able to provide the physical proof that this is where Earhart ended up," group founder Ric Gillespie told The Post. His group has led a dozen expeditions over the past 31 years, he said.

Gillespie said the reef includes boulder-size coral and a "violently dynamic shoreline" that may have pulverized the aircraft, making a whole-plane recovery unlikely. The mission is also a televised event for National Geographic, which will air a special on the expedition and Earhart's legacy in October. But the world will hear from National Geographic first if Earhart's remains or plane are found before the airing, a spokeswoman said.

Her legacy as a trailblazer is not lost on the Nautilus crew, Ballard said. More than half of the team are women, he said, including many key leadership positions. He will trade 12-hour watches with Fundis, his chief operating officer.

"This is important to women. That's why I'm so thrilled to have Allison as co-leader," Ballard said. "I hope to hell we find it on her watch."