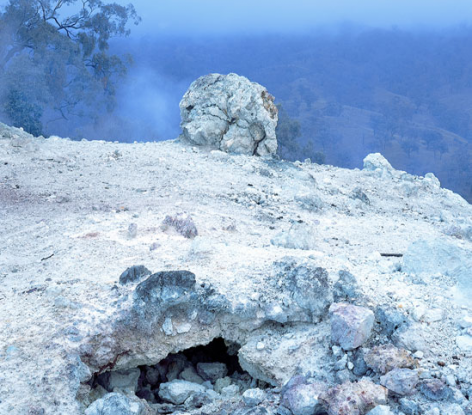 This Fire in Australia Has Been Burning For 6,000 Years

You’ve probably heard of the coal seam gas fire that blazes uncontrollably beneath the now-abandoned town of Centralia in Pennsylvania, US - the town that the creepy video game and film Silent Hill was based on.

But, while it’s been disruptive, this fire has only been burning for the past 53 years - a relative blink of an eye when you consider that in Australia a similar blaze has been smouldering for an estimated 6,000 years, long before the country was settled by Europeans.

Visible only as some foul-smelling steam, the coal seam blaze is contained 30 metres below the surface of Mount Wingen (which means “fire” in the local Aboriginal language) or Burning Mountain, located in the state of New South Wales. And it’s officially the oldest fire on the planet, that we know of at least.

No one is sure what first ignited the coal seam fire, but according to the stories of the traditional Wanaruah people, it’s been used by Aboriginal groups for thousands of years for warmth, cooking and to help make tools.

It was first discovered by European settlers in 1828, when it was falsely assumed that the heat was caused by volcanic activity.

According to Sarah Zhang from Gizmodo, the ignition: “Could have been a lightning strike, forest fire, spontaneous combustion, or even Aboriginal burning practices could even have been the initial spark.”

While it's not a very habitable area, the region has now become something of a tourist attraction, with its surface temperatures of around 350 degrees Celsius and the smell of acrid sulphur being released.

But although it's a pretty novel thing to see, coal seam fires like this one aren’t rare, in fact it’s estimated that around 1,000 are burning around the planet at any one time.

And it’s likely that many of them will continue to do so for a long time to come. Because, as Guillermo Rein, an expert on subterranean fires from the University of Edinburgh at Scotland told Andrew C. Revkin for the New York Times, they’re pretty much impossible to put out:

“Smouldering fires, the slow, low-temperature, flameless form of combustion, are an important phenomena in the Earth system, and the most persistent type of combustion. The most important fuels involved in smouldering fires are coal and peat. Once ignited, these fires are particularly difficult to extinguish despite extensive rains, weather changes or firefighting attempts, and can persist for long periods of time (months, years), spreading deep (5 meters) and over extensive areas of forest subsurface. Indeed, smouldering fires are the longest continuously burning fires on Earth.”