Some 150 million light-years away, a bizarre galaxy surrounded by swirling, cloud-like tendrils has provided an ongoing mystery for scientists, but new observations are starting to give us some answers.

The galaxy in question is called NGC 4696, and it's one of hundreds of star systems that make up the Centaurus galaxy cluster, located in the constellation of Centaurus. But unlike its numerous companions, NGC 4696 is in the unique position of being both consumed and dispersed by a supermassive black hole at its heart.

For starters, NGC 4696 is the brightest galaxy in the whole Centaurus cluster, which means it's among the brightest star systems we know about.

But even more distinctive is the galaxy's visible shroud of curling filaments, and thanks to new research led by the University of Cambridge in the UK, we're closer to understanding how these strange formations came to be. 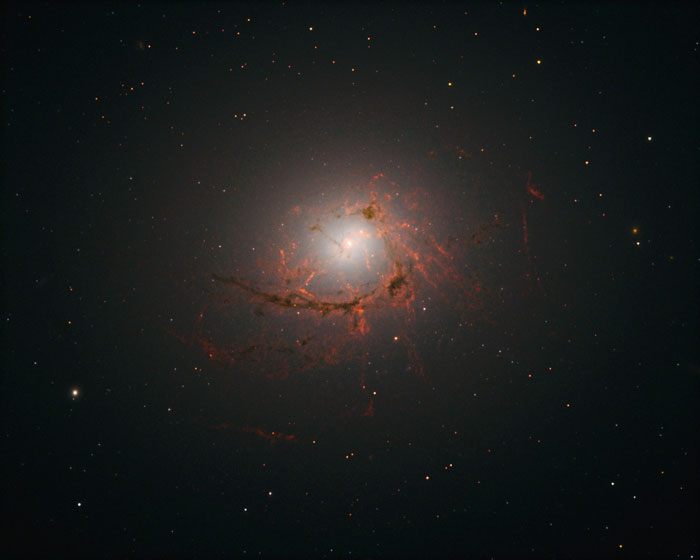 In new observations made with the Hubble Space Telescope, the team was able to measure these tendrils, which stretch 200 light-years in width (which is more than 1 quadrillion kilometres, if that helps at all).

The tendrils, formed of gas and dust, have a density 10 times greater than the surrounding gas, and they form swirling shapes that are connected to the galaxy's bright glowing centre.

At the heart of NGC 4696 is a supermassive black hole, which the astronomers think is responsible for the strange appearance of the gas threads.

According to their hypothesis, the black hole heats up the gas surrounding NGC 4696's inner regions, sending hot streams of gas in an outward direction.

This material sweeps up dust and other gas as it goes, pushing the filament threads as they arc out into space. The tendrils are also shaped by NGC 4696's magnetic field, which itself is swept out by the black hole's activity.

But while the process sends much of the filament material outward into the space surrounding NGC 4696, at the centre, the galaxy's black hole sucks gas inward and consumes it.

Although this dramatic phenomenon makes for a visually startling galaxy, the truth is that NGC 4696's remarkable gas swirls mask a dying star system.

With all that cosmic material being blasted outward, it leaves precious little gas and dust from with which to form new stars.

This means that as each of NGC 4696's stars age and eventually die, they won't be replaced by any new stars – so the Centaurus cluster's brightest galaxy won't always shine so brilliantly.

NGC 4696 is an example of an elliptical galaxy, which are often formed by collisions between spiral galaxies – such as our own Milky Way. Elliptical galaxies generally contain old and ageing stars, and feature little in the way of star formation.

On that front, NGC 4696 is much like other elliptical galaxies, despite its beautiful swirls.

But at least NGC 4696 can help us to better understand the cosmic processes that keep some star systems in a dormant state – no matter how spectacular they might appear.

The findings have been reported in Monthly Notices of the Royal Astronomical Society.