This Giant 'Living Fossil' Fish Can Live For 100 Years, Deep in The Ocean

Once thought extinct, giant coelacanths have been lurking in the ocean for hundreds of millions of years. The rarity and deep habitat of these fish has made them difficult to study, but a new look at one of the species has now revealed it might live much longer than we thought.

How long? Well, these fish - originally thought to live for roughly 20 years - could easily last a century, the researchers think. This would make African coelacanths (Latimeria chalumnae) some of the slowest-growing fish of this size in the oceans, along with deep sea sharks.

It fits with what we also know about these creatures: that they have slow metabolisms and low fecundity (they don't naturally produce a lot of offspring very quickly). They take their time growing old and reproducing, as seems fitting for a marine animal that lives in the deepest, quietest parts of the ocean.

"Our most important finding is that the coelacanth's age was underestimated by a factor of five," says marine biologist Kélig Mahé, from the IFREMER Institute in France.

Mahé and his colleagues were able to study the biggest group of coelacanth specimens ever collected – 27 fish in total, of varying ages up to what the team suspects is 84. They established that coelacanths reach maturity around the age of 55, and that offspring gestation takes around five years, based on two embryos included in the study.

As well as the large sample size, the team also employed polarized light microscopy: it revealed very small calcified structures called circuli on the scales of the coelacanths, which can be used to age the fish in a similar way to using rings in a trunk to age a tree.

These markings had previously not been spotted next to larger circuli, and through various techniques (including a process known as marginal increment analysis) the team indirectly verified that the circuli match the growing ages of the fish. 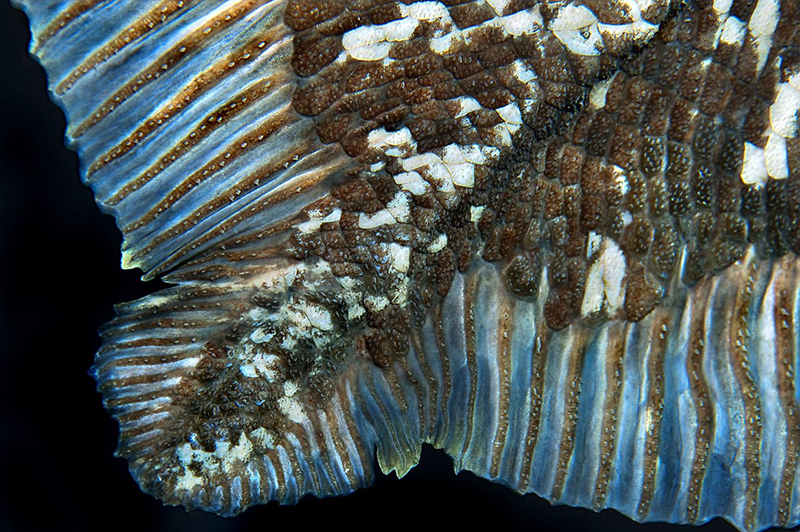 "We demonstrated that these circuli were actually annual growth marks, whereas the previously observed macro-circuli were not," says Mahé. "It meant that the maximum longevity of coelacanth was five times longer than previously thought, hence around a century."

Able to grow to up to 2 meters (6.5 feet) in length, the lobe-finned coelacanth has long been thought of as a 'living fossil' – a species whose close relations have all died off. Recent research has challenged that idea, showing that the fish isn't quite as cut off from the rest of the evolutionary tree as we thought.

Earlier this year another coelacanth study revealed that the huge fish has been borrowing genes from other underwater species over the years, through a process known as horizontal gene transfer. As one of the closest fish relations to humans, genetically speaking, this could shine a light on our own evolution.

What these findings also do is highlight just how at risk the species is to becoming extinct – for real this time. Animals that grow and reproduce at a slower pace are always more vulnerable to dying off, and the researchers behind the new study want to make sure that doesn't happen.

"Long-lived species characterized by slow life history and relatively low fecundity are known to be extremely vulnerable to perturbations of a natural or anthropic nature due to their very low replacement rate," says Mahé.

"Our results thus suggest that it may be even more threatened than expected due to its peculiar life history. Consequently, these new pieces of information on coelacanths' biology and life history are essential to the conservation and management of this species."