This Bizarre Hole in The Water Is Not an Optical Illusion. It Actually Exists

When the heavens open up in eastern Napa valley in California, a watery portal to hell can open up, too.

If water levels in the Lake Berryessa reservoir at the top of Monticello Dam rise too high, the excess water begins whirlpooling into a big hole, seemingly carved into the surface of the lake.

Known fondly by locals as the 'Glory Hole', the hole is not actually a hell-mouth, although the vortex sure does look like it. It's a spillway, built by engineers in the 1950s. The hole is an alternative to a more classic side chute, used to control the flow of water out of a dam or a levee.

But in a narrow gap between cliffs like the Devil's Gate, where the Monticello Dam is situated, a side chute would have nowhere to go. Instead, the builders settled on a big old drain, like the ones in your bathtub or sink.

The structure is known as a bell-mouth (totally rhymes with hell-mouth); these have been used to control the water level of several other dams around the world.

However, the Glory Hole in Napa is one of the more famous, as it results in quite the spectacle. During a particularly wet year in 2017, hundreds gathered on the concrete ledge to stare open-mouthed into the yawning abyss, according to The New York Times.

In 2019, after another heavy season of rainfall, the Glory Hole again kicked into action, this time drawing thousands of curious onlookers.

That same year, in fact, an unfortunate cormorant made headlines when it was filmed getting sucked into the chute (some reports claim it survived).

Luckily, these days the same accident probably wouldn't befall a human swimmer. Firstly, the reservoir is roped off and prohibits swimming or boating. Secondly, most people could easily swim against the whirlpool's speed and strength, even when it's at its most powerful.

The only human death ever recorded at the hole was in 1997, when a woman swam out to the cement structure. She apparently clung to the edge for 20 minutes, but rescue came too late. Her body was found several hours later.

While the vortex might look intimidating from above, those who work on it say the speed of the water isn't that great; it's just a lot draining all at once.

Each second, the 22-meter-wide (72 ft), 75-meter-long drain hole (245 ft) is capable of swallowing around 1,360 cubic meters of water (48,000 cubic feet). After the initial drop into the hole's entrance, the water enters a narrower pipe that then empties into nearby Putah Creek after more than half a kilometer of horizontal travel. 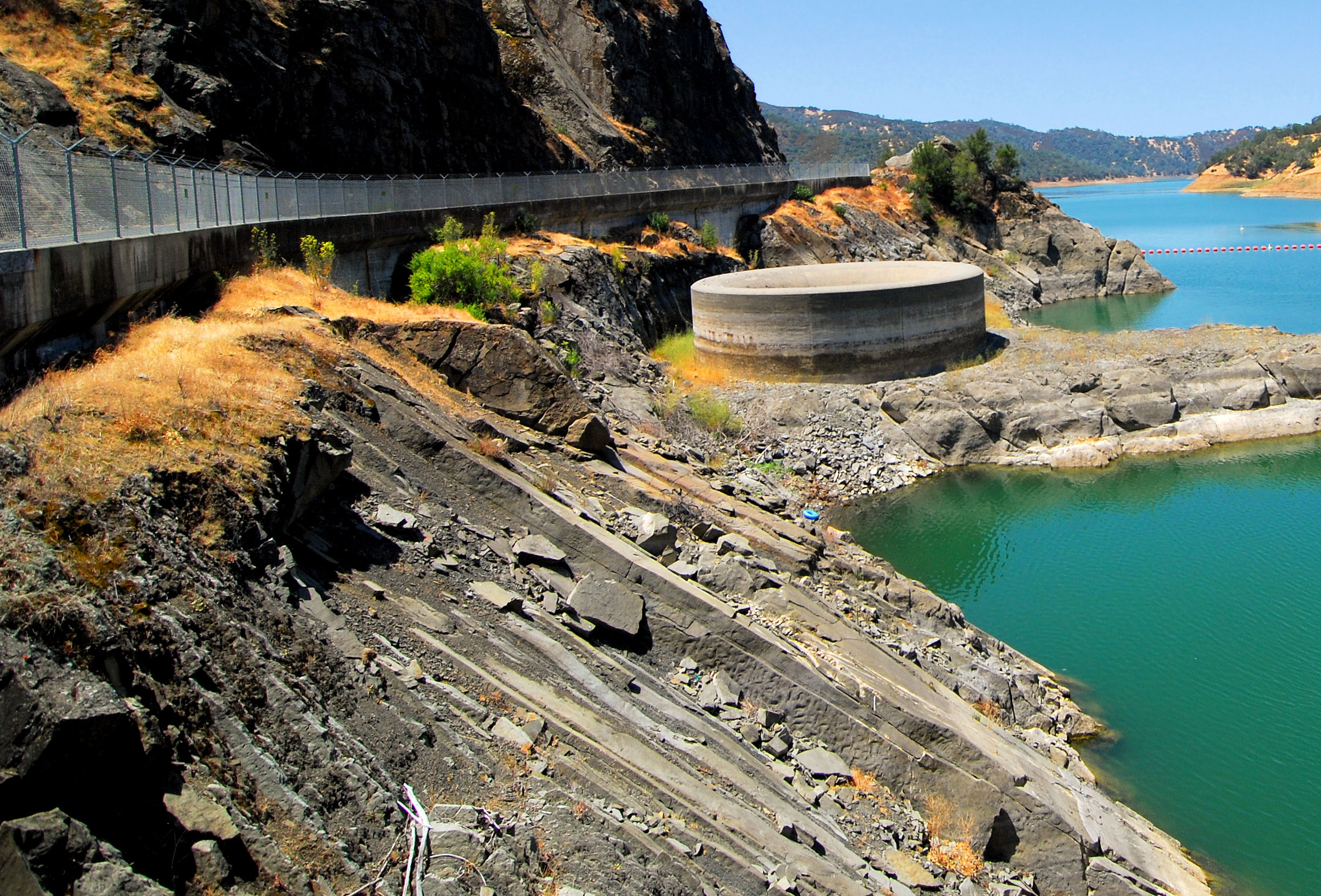 The Glory Hole when the reservoir is low. (Shackleford-Photography/Getty Images)

Today, the Glory Hole is well protected so that no one accidentally hurts themselves. When it rains, tourists often line the fences to watch the hole in action.

In the 1950s, when engineers built the Glory Hole, they thought it would only be used once every 50 years in extreme scenarios. Since the turn of the century, however, the whirlpool has opened up three times.

What was built for an unlikely scenario has now become more of a seasonal sensation – yet another reminder that our world's climate is changing.